'A Christmas Story' redux: Haverford boy gets tongue stuck to pole in dare 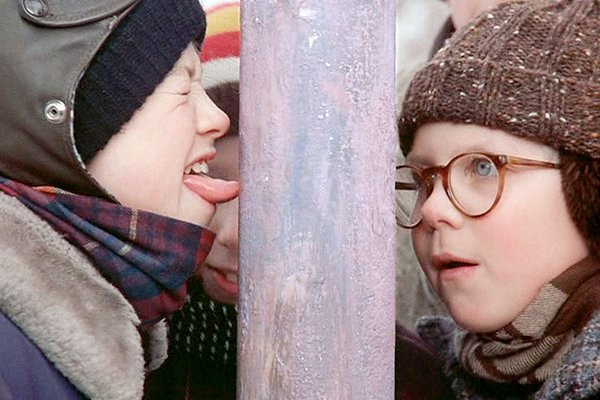 The infamous scene in "A Christmas Story" where Flick, left, played by Scott Schwartz, put his tongue on a frozen flagpole and gets stuck after being "triple dog dared" by classmate Ralphie, played by Peter Billingsley.

It's bitter cold outside. And it's Christmas time.

So, naturally, a 14-year-old Haverford boy dared his younger brother to stick his tongue to a cold pole as they headed to school on Friday morning. It's unclear whether the younger sibling, age 12, was subjected to a triple dog dare. But he accepted the challenge.

And promptly got his tongue stuck.

"Obviously, they must have been watching 'A Christmas Story,'" Haverford Deputy Police Chief Joseph Hagan said.

But unlike the scene in the famed holiday film, in which the schoolchildren abandon the tongue-stuck Flick as the school bell rings, the older brother stuck around. Hagan said the older brother was able to loosen his sibling's tongue with warm water as police arrived to assist.

Years from now, the boys hopefully will share some laughs as they retell the story each holiday season. But in the immediate aftermath, the younger sibling suffered some minor tongue bleeding, Hagan said.

It seems likely that younger siblings across the country fall victim to this dare every winter. But Hagan said this was the first time he's fielded such a call.

"Right away, the first thing we thought of was 'A Christmas Story,'" Hagan said. "As a matter of fact, I'm going to see the play next week in Media."

For those who are curious, Hagan said applying warm water is the best way to remove a tongue from a frozen pole, because the warm moisture warms both the pole and tongue, causing it to loosen.

And if you're wondering about the science behind such a scenario, Gizmodo explained why tongues can stick to frozen flagpoles in an article published last winter:

"When the tongue makes contact with the pole, the heat is rapidly transferred, cooling the tongue and forcing the body to send warmth in the form of blood and heat energy. The problem is that, today, most metal flag poles are made up of aluminum or steel (an iron alloy with carbon), making them fine heat conductors. The pole absorbs the heat quite readily, literally sucking the warmth from your tongue faster than your body can supply it. The saliva on your tongue then freezes (provided it is below freezing), with the resulting ice latching onto the flagpole and your very porous tongue."

But, kids, just trust the science. And laugh at the movie, not your friends or siblings.