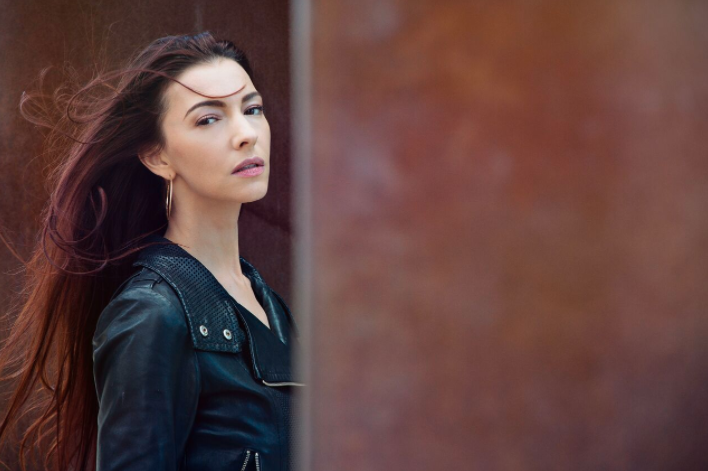 Chrysta Bell refers to herself as “a bit of a gypsy,” and it’s not hard to see why. The actress and vocalist has had a longtime association with David Lynch, and a smoky new album (“We Dissolve”) produced by P.J. Harvey’s closest collaborator, John Parrish.

Yet, for all of her self-titled “Lynch-ness” – a starring role in Showtime’s beloved “Twin Peaks: The Return,” two spookily atmospheric albums with the auteur-musician – Bell has led an equally fascinating personal life. As chatty as she is, Bell will surely reveal as much during her PhilaMOCA “Eraserhood Forever” showcase on Saturday night.

“My father was a dentist, a hot air balloonist, an owner of a natural burial cemetery. My mother was a singer who co-owned a recording studio with my stepfather where I recorded commercial jingles. And though I didn’t wind up being Disney material,” said Bell with a laugh, “I did audition to become a Mousekateer. I guess I was more Hitchcock than Disney.”

The first musical detour for the Texas singer was when she joined the “Django-jazz-cabaret-swing” band, 8 ½ Souvenirs and the performance art-driven Mass Ensemble in the 1990s.

“These groups were the opposite of pop, and my parents were supportive of me being odd, my calling. Look, there was always drama at my house, and I mean theatrical. They used to act out scenes from “Eraserhead” in our living room. I wasn’t allowed to see David’s movie, but I got the gist.”

Bell thinks it funny as to where her future was, that destiny took her in a different direction than Mickey or Goofy, and into the hands of Lynch, a notoriously dreamlike, avant-garde film director and musician whose works such as “Blue Velvet” and the ABC series “Twin Peaks” brushed up against the mainstream. Yes, she had made films and albums before Lynch, but by 2006 – when they collaborated on “Polish Poem” for his film, “Inland Empire,” her brand of languid cabaret was ripe for “his Lynch-ness.”

“I was my own weirdo before David, but it was him as a person, as much as his art, that made an impression, and we got a lot of work done considering the handful of times we were in a studio,” said Bell of 2011’s “This Train” and 2016’s “Something in the Nowhere.”

She claims that theirs is a genuine friendship that finds the two gossiping over coffee and cigarettes (“I’m an NPR junkie and tell David all of the most interesting stories”), and bonding over shared esoterica such as their belief in transcendental meditation.

“The art is important, but, ours is a lovely repartee,” she said.

They used to act out scenes from “Eraserhead” in our living room. I wasn’t allowed to see David’s movie, but I got the gist.”

Bell states that Lynch always planned for her to be part of 2017’s “Twin Peaks: The Return,” and wrote the role of “Tammy” – the lone female member of the secretive detective Blue Rose Society – for the singer-actress.

“Like the audience, my character was in discovery mode, ever curious, and personified all that the fans were feeling. Tammy did what she loves to do. She is excited and excitable.”

Regarding the ultra-mysterious finale to an already inscrutable television series, the end of “Twin Peaks The Return” left Bell gutted.

“I’m still going through the seven stages of death and denial. How could David leave us like this? Yet, it was a perfect cycle of nature and art. There was definitely collusion with other dimensions.”

That type of collusion can also be used to describe her elegantly eerie new album, “We Dissolve.” Sure, it has a dreamy, Lynch-like feel.

“I didn’t want to stray too far from that cloudy sensation,” she said.

Yet, with its mix of pop, samba, soul, post-punk and electronica, Bell and “We Dissolve” sounds like a mod and moodier Annie Lennox as she traverses through songs such as “Gravity,” and the album’s title song.

“There is the feeling of being deeply in love and connected, the idea of being so close you dissolve into each other,” she said.

“The other thing is about dissolving into the all-ness of everything, like the fact that I inherited my dad’s all-natural funeral cemetery and we return to the ground we came from. It’s like my jingles as a kid – I’m coming full circle.”