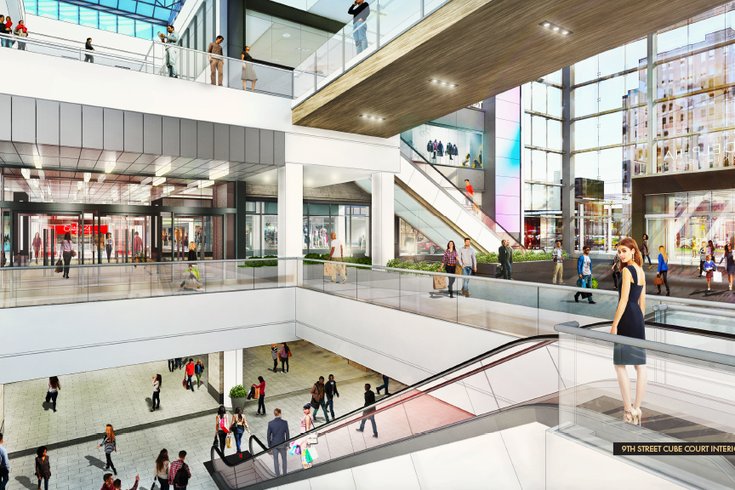 The 'Cube Court' at Ninth and Market streets.

In April, the Pennsylvania Real Estate Investment Trust (PREIT) and its partner Macerich announced a tentative agreement with the City of Philadelphia and the commonwealth to provide $90.5 million toward their $325 million redevelopment of the Gallery as The Fashion Outlets of Philadelphia at Market East.

The project took an important step this week after the Philadelphia City Planning Commission voted on Tuesday to approve several bills that will allow the developers to get started without repeatedly visiting the zoning board and City Council, PlanPhilly reports.

One of the approved bills authorizes a new payment schedule from the city to the developers to maintain public areas of the mall. The new schedule overrides previous obligations to the Mall Maintenance Corporations for the next 60 years, with payments of $125 million now planned over the next 43 years.

Another bill transfers certain streets and concourse areas from the city to the developer, relinquishing partial ownership and liabilities for the mall.

A third bill permits encroachment of mall signage into public areas, providing leeway to the developer and retailers to make decisions on size and design.

Finally, a change to the zoning code will allow for accessory signs and billboards, which could lead to more digital signage in conjunction with the city's recently created Market East Advertising district.

City Council's Committee of the Whole will consider these bills, along with a $55 million Tax Increment Financing package, during a hearing next week.

The entire rebranding is modeled on The Fashion Outlets of Chicago, with an estimated 125 stores offering "a fusion of outlet retail taking the form of luxury and moderate brands, traditional mall retail, popular flagship retail, artisanal food experiences, and entertainment offerings," according an April press release.

PREIT purchased The Gallery, built in the 1970s, for $60 million in 2013. It owns malls across Pennsylvania and New Jersey and brought on Macerich with a 50 percent common ownership interest in July 2014.

"We believe that the proposed redevelopment will position The Gallery as the next great urban marketplace in the United States, capitalizing on its central location where mass transit, tourism, the residential population and employment bases converge," said Joseph F. Coradino, CEO of PREIT, in last month's press release. "The redeveloped property will become the foundation of a new, vibrant Market East District, and we are excited to lead this effort."