Cole Hamels: Phillies are 'going to be like the Houston Astros pretty soon' 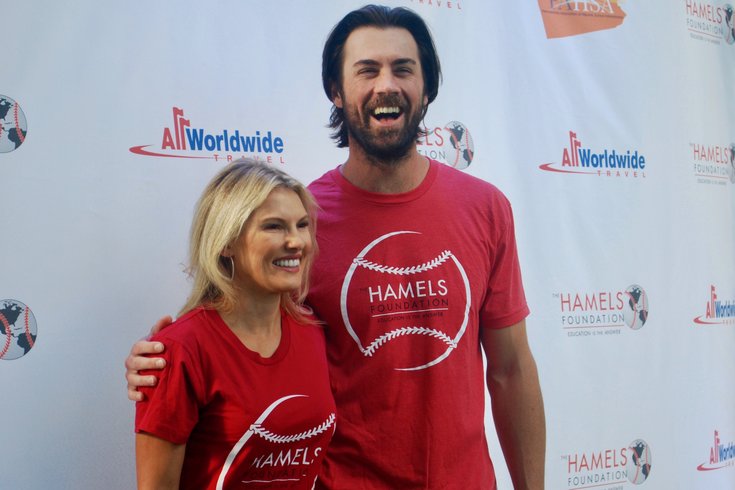 Cole and Heidi Hamels were back in the Philadelphia area on Thursday to host the first annual Top of the Hill party to benefit The Hamels Foundation. The Hamels' family maintains their Delaware County home – their kids enjoyed their first day of school at Episcopal Academy on Thursday.

Life is often unpredictable and filled with unlimited possibilities, but to say you went on an hour’s drive on a Thursday afternoon and ended up seeing a live camel and Cole Hamels within a few hundred feet from each other in Delaware County, well, you must be living right.

Apparently, that’s where the camel came in.

Honestly, it was more surprising to see a camel in Delco than Hamels, even though the pitcher is nearly two years and two months removed from the blockbuster, pre-trade deadline deal that sent him to the Rangers (along with fellow left-hander Jake Diekman) in exchange for five prospects (all whom have since reached the big leagues, four on the current Phillies active roster) and pitcher Matt Harrison.

It wasn’t surprising to see Hamels because the Philadelphia-area house he still owns sits pretty much a pitcher’s long-toss throw away from Arasapha Farms.

And so it was only natural for Hamels, who had called the Phillies organization home from June of 2002 to July of 2015, to keep his foundation rooted in Philadelphia along with his current baseball home in Arlington, Texas, and his wife’s home state of Missouri.

“Shoot, we did the All-Star break at the Jersey Shore, (in) Ocean City,” Cole Hamels said. “We have such good connections here that we don’t want to totally discard. So it’s been great. Our house was just over our trees over there … (Shane) Victorino’s is right over there, (Roy) Halladay (was) over there. … It’s a good neighborhood.”

After spending the off day on the Rangers schedule back in the Philadelphia area, Hamels will head to Arlington where Texas will host the Rangers for three games before Carlos Ruiz and the Seattle Mariners come to town.

Hamels entered 2017 as one of three pitchers (along with Jon Lester and James Shields) to come in with nine consecutive seasons of making at least 30 starts. Since 2008, only three pitchers have thrown more innings than Hamels:

The final three-plus weeks will be fun and intense, the way Hamels likes it. The Rangers are two games back of the second wild card in the American League, with the Twins, Angels, and Orioles all ahead of them. Ruiz’s Mariners are just 1 1/2 games behind Texas.

“He killed me,” Hamels said begrudgingly when asked if he’d faced off with his former battery mate this year. “He wouldn't swing at any changeups.”

[Editor’s note: Ruiz has faced Hamels in two games in 2017. He’s doubled, walked, and struck out in five plate appearances. They could meet again next week, as Hamels’ next turn will come vs. the Mariners.]

Hamels’ second full season with the Rangers has been a bit uneven. He missed two months with an oblique strain in the first half and, since returning, has mixed in nearly as many rough outings (three starts of six or more earned runs) as he’s had stellar ones (four starts with zero unearned runs).

In the last five seasons (2013-17), only nine pitchers have thrown more innings than Hamels. Among those nine, only five have a better ERA than Hamels' 3.36 over that time frame:

On the whole, Hamels’ run in Texas has been a positive one (as long as he tried to ignore getting bounced out of the playoffs in consecutive years by the Blue Jays).

Although he’s spent two straight summers in Texas, Hamels has kept an eye on his old team.

“I know (Cameron) Rupp and (Aaron) Nola … obviously (Freddy) Galvis and Cesar (Hernandez),” he said. “I’m so happy the career years (Galvis and Hernandez) have put up the past two years, obviously it’ll be interesting to see where they go or what’s in the plans for them, but they’re going to be in the big leagues for a long time.

“But it’s nice to see that (the Phillies) are building something. They’re going to get a few top round picks and they’re going to be like the Houston Astros pretty soon. You rack them up and you build a core around these types of guys, you’re going to make a huge impact in the next few years. It’ll be an exciting organization and I think the fans are going to be happy.”

Since he still maintains a home in the area – and obviously spends a lot of time there with his kids in school here – the most logical question was to ask whether the 2008 World Series MVP would ever consider calling Citizens Bank Park home again in the near future.

Hamels could be a free agent as soon as next November, although it’s not likely to come until after 2019. Hamels’ vesting option for 2019 will no longer be in play since he won’t pitch a combined 400 innings in 2017 and 2018 after his DL stint this year; but, barring health, the Rangers would almost surely choose to pick up the ’19 option anyway rather than exercise a $6 million buyout.

Long story short: Hamels is likely to be a free agent after 2019, about two months shy of his 36th birthday. And, perhaps that’s just when the Phillies are serious contenders again, too.

“You know, you just play and play until somebody says no and you kind of look at the options from there,” Hamels said. “I think that’s what we’ve always done. We keep our options open and we don’t ever try to shut the door on any possibility. I always keep anything and everything available.”

One option the Hamels’ never considered two years and two months ago: leaving Philadelphia entirely, including their foundation and its mission to enrich “the lives of children through the power of education by giving them the tools they need to achieve their goals.”

“We have such good family and friends here, and obviously the memories,” Hamels said.

“I don’t think you can spend a decade in any one place, I don’t care who you are, and … walk away with the support group we have,” Heidi Hamels said. “I’d always put myself in these people shoes going, ‘We’ve relied on the Hamels Foundation to get us through, year after year to help us with our science program, with our math programs, with our libraries.’ They do rely on us. So without that, I don’t know. I’m not saying we can do it forever and ever and ever, but as long as we’re here, we can do it.”

Thursday night’s Top of the Hill charity event benefited both local Philadelphia schools and the foundation’s efforts in Malawi, Africa. The Hamels Foundation presented a $20,000 check to AMY Northwest Middle School in Roxborough, which will be used to construct an Outdoor Garden Classroom on the school’s grounds.