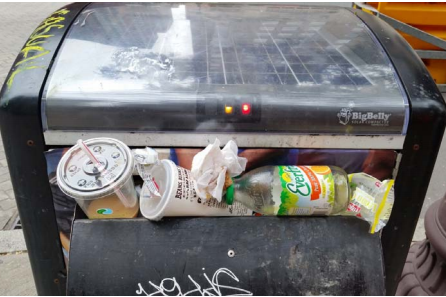 Office of the Controller/Contributed Art

One of Philadelphia's BigBelly trash cans.

Butkovitz released an audit of the BigBelly trash cans, which were installed mostly throughout Center City in 2009 and are supposed to collect more trash than traditional wire baskets.

The BigBelly cans use a solar-powered software system that condenses trash and is supposed to notify sanitation workers when a can is full.

However, when the audit was conducted, the notification system wasn't working in 82 percent of the cans, Butkovitz said.

"This means the system was practically useless,” Butkovitz said. “Sanitation crews had to collect the garbage at the same collection rate as with the standard wire baskets.”

Additionally, there were "numerous damaged, non-working and unsanitary" BigBelly cans on the street and in storage.

Butkovitz's review came a day after City Council approved a deal for 275 new cans from BigBelly. The new cans will now have foot pedals and are being provided free of charge in exchange for advertising rights, according to the Inquirer.

The Controller's Office chided the Streets Department for not conducting a thorough cost benefit analysis of the cans, which cost $3,700 a pop, and for not having a viable work order and maintenance tracking system in place, meaning repairs "languish for months or sometimes years."

One can near the corner of 4th and Market streets had a missing handle for three months in 2016, according to the audit.

Butkovitz recommended reviewing the costs of the BigBelly cans, pursuing reimbursements for the lost use of the nonworking solar system and developing a working tracking system for new parts and repairs.