Controversial policy may return to combat predatory towing in Philly 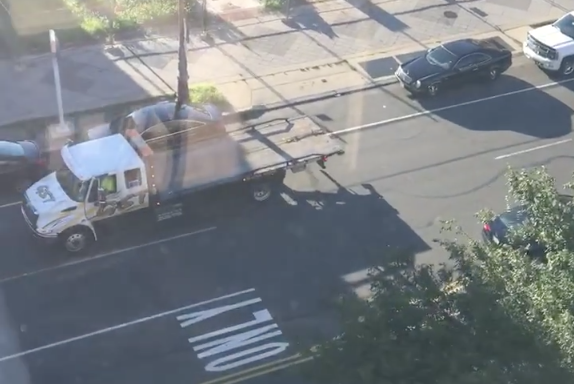 This screen capture of a Facebook user's video shows a flatbed tow truck preparing to haul a vehicle from South Broad Street.

The streetside parking space — parallel to a demolished property surrounded by a chain-linked fence — appeared to be as legitimate as any spot on South Broad Street. After all, this is a section of Philadelphia where residents get away with parking in middle of the street.

But when Robert S. Price returned 45 minutes later, after a Sunday breakfast at the Broad Street Diner, his car was gone.

"When I went to police to report a stolen car, they laughed," Price said Tuesday afternoon. "They said, 'Oh, you're one of the people who got caught in that trap.'"

"We have an industry that conducts business on our streets with no one monitoring what they do. The fact that people can just put up a sign and steal someone's car, in this day and age, is just not an acceptable practice." – City Councilwoman Maria Quiñones-Sanchez

"That trap" happened to be an alleged bait-and-trap scheme operated by a prominent city towing company. Victims claim they parked legally, but returned to find a "no parking" sign — and their vehicles gone.

The allegations added steam to legislative efforts aimed at ending predatory towing practices. Price was one of several people who spoke out against predatory towing at a City Council committee hearing on Tuesday.

The Committee on Streets and Services heard testimony on a pair of towing-related bills and approved both for consideration by the entire council. The first would require illegally parked vehicles to be ticketed before being towed. The second amends the city's rotational tow system, adding penalties aimed at ending wreck-chasing practices.

The bills are part of a wider effort to eliminate predatory towing within the city. They include changes to city-issued towing licenses, an online database of parking locations monitored by towing companies, and the addition of a third-party management company to supervise enforcement.

Councilwoman Maria Quiñones-Sanchez, who sponsored the first bill, said she expects these efforts to be completed within the next 18 months.

"We have an industry that conducts business on our streets with no one monitoring what they do," Quiñones-Sanchez said. "The fact that people can just put up a sign and steal someone's car, in this day and age, is just not an acceptable practice."

The committee heard testimony from a trio of men, including Price; each man claimed his vehicle was illegally towed. One man said a towing company tried removing his car from a parking lot at the Pearl Theater at Avenue North even though he was parked within a 15-minute loading period.

"To me, that was grand theft auto if I didn't come back in time," the man said. "These guys got too much power. ... You don't have to break the law to enforce the law."

Capt. Francis Healy testified that police have received reports of "no parking" signs being posted after a vehicle has been towed, as well as cars being moved or pushed into illegal spaces by tow trucks.

Healy, a special legal adviser to Commissioner Richard Ross, said police support both bills, but noted a ticket-to-tow policy will increase burdens on both towing companies and police. It is unreasonable to expect police to immediately respond to every towing situation, he said.

The ticket-to-tow proposal essentially would reinstitute a policy the city ditched in 2013. Instead, the city required tow operators to photograph a vehicle before removing it, a practice still in place. Violators have a right to see the photo.

"They have the required photograph, but nobody else has been there to confirm that these cars were, in fact, legitimately towed," Healy said. "So, we're going back two steps, with the ticket-to-tow. ... This is something we have to undertake at the police department to do our best to be there as quickly as possible, but we're not going to be there in five minutes, in most cases."

Healy said other agencies, including the Philadelphia Parking Authority, university police and SEPTA officers have the authority to issue tickets. 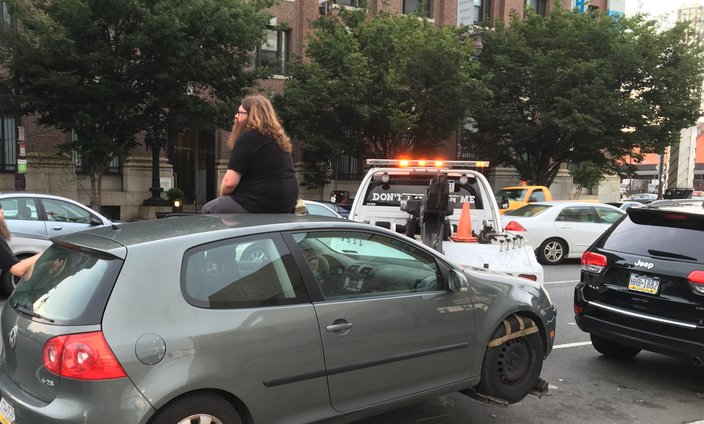 The committee also heard testimony from several detractors of the ticket-to-tow bill, including Lew Blum, owner of Lew Blum Towing, one of the city's largest towing companies.

Blum said the city eliminated that policy several years ago because it was "ineffective." He questioned allegations that tow operators move vehicles into illegal spaces, saying it "seemed like a lot of work" to tow a vehicle.

"However, this (bill) will not stop these alleged acts from occurring, if they do happen," Blum said. "The tower can allegedly still move the vehicle and still call for a ticket. Therefore, I'm puzzled how the bill ... can address this so-called act."

With inadequate police resources, Blum said homeowners, businesses and parking lots could be adversely affected. He suggested towing companies instead be required to notify offenders of their right to see their photographed vehicle on each bill or invoice.

"If a vehicle is illegally blocking anyone ... this could cause them lost income or their right to come and go from their property," Blum said. "Our police force should be concerned about higher priority crimes. Taking our hard-working police officers to answer these tickets causes a crime itself."

Christine Young Gertz, director of government affairs for the Pennsylvania Apartment Association East, urged council to amend the bill so that it excludes apartment communities.

"The vast majority — all, I would venture — of the managers of apartment communities are in the best position to manage their properties," Gertz said. "They can and have successfully taken care of the towing problems of unauthorized vehicles."

"We don't want to penalize them," she said. "We're very much committed to minimizing what will hopefully be a short-term problem to a long-term solution."

The second bill, sponsored by Council President Darrell Clarke and Councilman Bill Greenlee, aims to protect motorists from exorbitant towing fees after being involved in a traffic accident.

It broadens language to prevent towing companies from racing to the scene of accidents, instead allowing the city's rotating tow selection to take effect. Violators are subjected to impoundment.