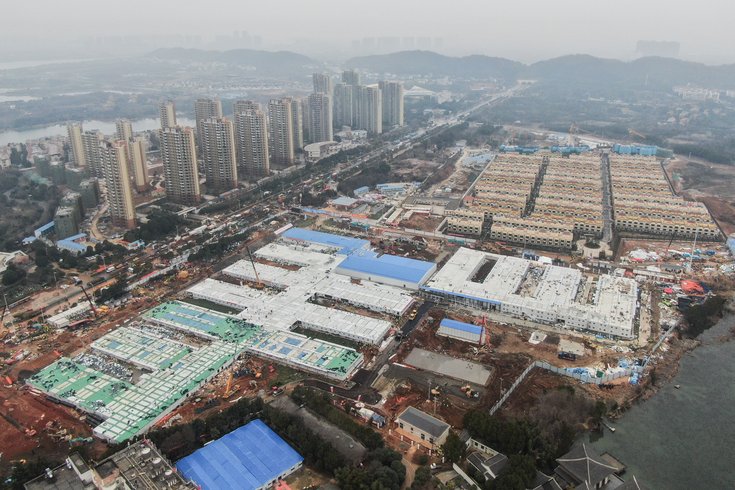 University of Pennsylvania student Zhexuan Huang is stranded in Wuhan amid a lockdown caused by the coronavirus outbreak. More than 4,100 cases of the illness have been reported in Wuhan, but residents believe the number is much higher. Above, a makeshift hospital in Wuhan designed to treat patients with coronavirus.

A Chinese student at the University of Pennsylvania will have to take a leave of absence amid a lockdown in Wuhan city, the epicenter of a novel coronavirus that has landed the country in crisis.

Sophomore Zhexuan Huang, an economics student, had planned to return to Philadelphia on Jan. 15 as he waited for approval on his visa renewal. He hasn't been able to leave his hometown since then due to the outbreak of the respiratory illness, according to the student-run newspaper The Daily Pennsylvanian. The city has been on lockdown since Jan. 23.

Chinese officials first detected the novel coronavirus on Dec. 31, linking it to an open-air market in Wuhan, a city of more than 11 million people.

In Wuhan alone, more than 4,100 people have been sickened and 224 killed, the New York Times reported Monday. Hospitals are dealing with an overwhelming number of patients and are struggling to test those who come in with symptoms. Residents believe the number of those infected is much higher.

As fear spreads across the city and the country, Huang said most people are staying inside to avoid potential contact. Only his father has left the house for brief grocery runs. What little Huang has been able to see has come from drone footage uploaded online.

"Some people fly their drones outside the city to see the view of the city right now," Huang told The Daily Pennsylvanian: "There are pretty much no cars on the street, like no people walking. The city is like a ghost city. It's like a zombie apocalypse now."

Huang believes he will have to register for summer courses at Penn, as school policy doesn't allow him to complete his exams remotely.

The coronavirus has now been detected in at least 23 countries. More than 17,000 cases have been reported worldwide and more than 300 people have died.

The United States declared a coronavirus emergency on Friday, issuing the first federal quarantine in 50 years for those who have been to China's Hubei province in the past 14 days.

Scientists researching the outbreak believe the virus, which is part of a larger family of coronaviruses, may have originated in bats and spread to another animal sold at the Wuhan market. It is now being transmitted between humans.

As a precaution, several local universities have implemented policies to contain the spread of the virus. While Penn has recommended delaying or canceling travel to China, Temple University and Drexel University have both suspended student travel to China until further notice.

For Huang, the coronavirus will put his Penn education on hold temporarily as he and the rest of Wuhan navigate the eerie circumstances of panic and disrupted public services.