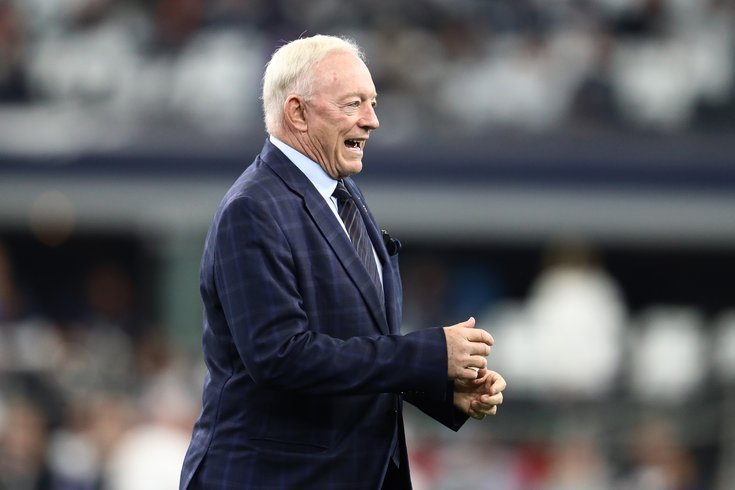 Dallas Cowboys owner Jerry Jones had an opportunity to hire New England Patriots head coach Bill Belichick in the mid-1990s, He chose to go in a different direction, possibly missing an opportunity to land one of the greatest coaches in NFL history.

The Philadelphia Eagles are at a temporary low point relative to two of their greatest NFL rivals, the Dallas Cowboys and New England Patriots.

Several weeks ago, the Cowboys embarrassed the Eagles in a blowout on national television, taking control of the NFC East. Then last weekend, New England came to Philadelphia and beat the Eagles in a close game that was very winnable.

Things will eventually turn around again for the Eagles, but an interesting story came out this week in the run-up to the Cowboys' Week 12 matchup with the Patriots in Foxborough.

A report from John Machota of The Athletic reveals that Cowboys owner Jerry Jones had a clear opportunity to hire Patriots head coach Bill Belichick in 1995.

The two men apparently ran into each other at a ski resort not long after Belichick was fired following a disappointing season as head coach of the Cleveland Browns.

"I can coach," Belichick reportedly told Jones. "If you ever get an opportunity, don't forget about me."

Jones wound up hiring Barry Switzer, while Belichick spent several seasons with the New York Jets before taking the head coaching job with the Patriots.

"I've thought about that many times," Jones told Machota. "You never know where you can find a great coach. You can find them in a ski checkout line sometimes."

The Cowboys have spent the two decades since then running through six different coaches, Jason Garrett being the last and current among them. Remember Switzer, Chan Gailey, Dave Campo, Bill Parcells and Wade Phillips in Dallas? Remember any of those teams making much noise?

For Eagles fans, the shape of the team's history may have been vastly different if Belichick had wound up in Dallas. There would have been years of duels between Andy Reid and Bill Belichick. There might have been a dynasty in Dallas that made football as irrelevant here as it has been in Miami lately. Or, without Tom Brady, presumably, Belichick might have become an ordinary coach.

It's not often Eagles fans can thank Jerry Jones, but in this case, he deserves our appreciation for not seeing Belichick's potential.