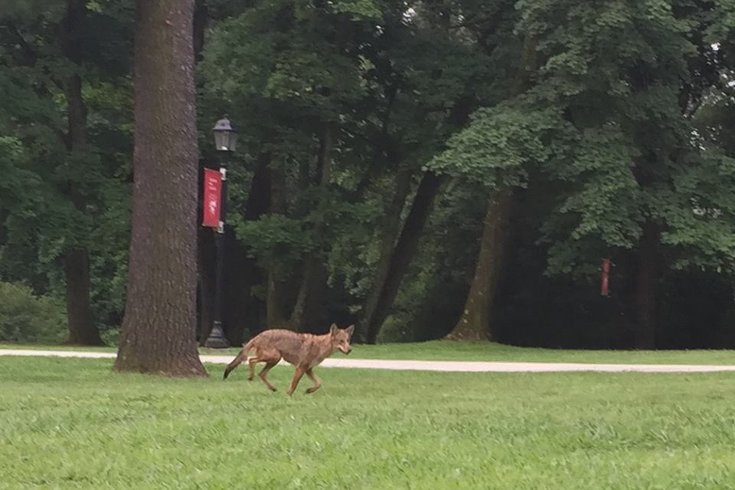 Perhaps this coyote was just looking for someone to talk with about enrollment.

A coyote was spotted Friday on the SugarLoaf Campus of Chestnut Hill College, according to the Friends of the Wissahickon.

Here’s a look at our friend:

Peg Shaw, Director of Land Management for The Friends of the Wissahickon, said someone who worked near Wissahickon Park sent the picture to the organization.

"I’ve seen coyotes in the park," Shaw said. "We’ve got coyotes all over the place. They’re not so uncommon, over the past 10 or 15 years. They’re similar to foxes in that they’re not deep woodlands species. They like to live on the edges of wilderness."

Shaw said there's not actually much that should be done when a coyote's spotted, other than staying away from them.

Here’s a little more about urban coyotes, from (fittingly) UrbanCoyoteResearch.com:

In urban areas, coyotes prefer wooded patches and shrubbery (which accurately describes the land immediately adjacent to Chestnut Hill College, including Morris Arboretum and Wissahickon Valley Park near Bells Mill Road.) Such areas provide shelter for a coyote to hide from people.

Our research has found that within the urban matrix, coyotes will avoid residential, commercial, and industrial areas but will use any remaining habitat fragments, such as those found in parks and golf courses.

Perhaps this coyote was just looking for someone to talk with about enrollment at Chestnut Hill. Late registration fees kick in Aug. 13, after all.

Of course, this pales in comparison to the three-part coyote soap opera that unfolded in Philadelphia this past April. First, a coyote was found in Northeast Philadelphia and released near Pennypack Park. Three days later a coyote was captured in South Philadelphia after it hid under a dumpster. The same one? The police weren’t sure. Unfortunately, that coyote was ultimately euthanized.

Here’s hoping our new coyote friend has a better end to their story.