After claiming he is detail-oriented, medical examiner admits he brought wrong report to Creato murder trial

Flustered on the witness stand, pathologist Dr. Gerald Feigin admits, 'I made a mistake' 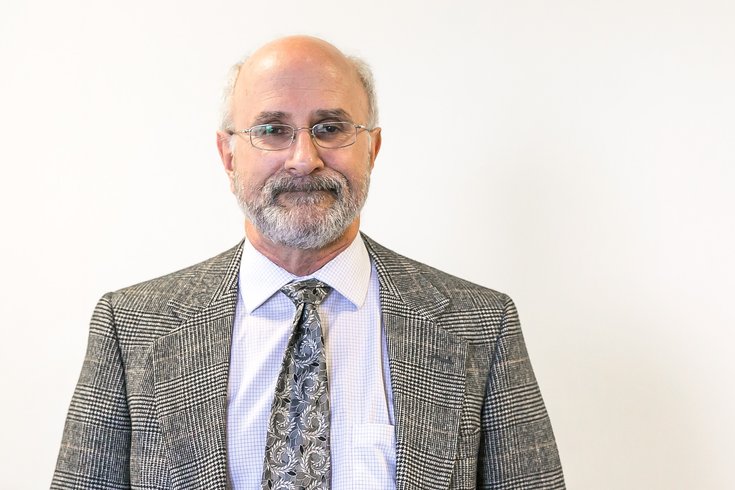 After telling the court he was thorough and detail-oriented, Camden County medical examiner Dr. Gerald Feigin became flustered Wednesday when he realized he had brought the wrong crime scene report to court for the murder trial of David "DJ" Creato.

"You are detail-oriented and you have the wrong report?" mocked Richard J. Fuschino Jr., defense attorney for Creato, who is charged in the October 2015 murder of his three-year-old son.

"Then I was wrong. I made a mistake," responded Feigin, who grimaced and shrugged at one point.

"It was mixed in," the doctor said of the wrong report, which is officially known as a RIME, or Report of Investigation Medical Examiner.

"I made a mistake," Feigin repeated.

The exchange over the report ended with Fuschino tartly replying, "We all make mistakes, doctor. Thank you."

Earlier in the day, the judge already had barred the defense from asking Feigin about questionable findings he made in two previous cases, including the "Boston Nanny" case from 1997.

The pathologist, who performed the first of three autopsies on Brendan Creato, eventually ruled the boy's death a homicide. But he admitted during Fuschino's cross-examination that he could not name the precise cause of death, nor answer where or when the boy was killed, and by whom.

Creato is accused of killing his son to further his romance with Julia "Julie" Stensky. She had visited her boyfriend on the weekend before the boy's body was found on Oct. 13, 2015 on a rock in a creek in Cooper River Park, about half a mile from the apartment they shared. The young couple – she was 17, he was 21 – argued about the child several times over the weekend, according to previous trial testimony. They had met on an online dating site about 10 weeks earlier.

Fuschino bore down on Feigin, questioning his handling of the case.

"Did you go out to the scene?" asked the lawyer.

The RIME report from the scene was made by his own investigator, Frank Johnson.

"You don't know what he did?" Fuschino pressed, of Johnson's report.

No, said Feigin, admitting his investigator had not taken any photos at the scene.

"Is a dead three-year-old in a creek rare? Does it deserve the comprehensive tox?' asked Fuschino, referring to the highest level of toxicology lab testing.

The medical examiner, who is employed by Gloucester County, but who serves Camden and Salem counties as well, testified that he had not used a rape kit. Feigin told Fuschino it was unnecessary because there was no external signs of sexual trauma. The water that Brendan Creato's body was found in would have washed away fluids such as semen or saliva, he testified.

When Fuschino characterized the bumps, bruises and scrapes found on the toddler's body as typical "three-year-old-boy stuff," Feigen said he agreed.

While admitting he did not go to the crime scene until four days after the body was discovered – to collect water samples – Feigen testified that he could not address neither the air temperature, nor the water temperature of the creek the morning Brendan's body was located by a K9 officer.

Assistant Prosecutor Christine Shah, who had called Feigin as a witness for the prosecution, had spent the early part of the morning going over the results of the doctor's physical examination of Brendan's body.

Nothing discovered answered exactly how the boy died, but oxygen deprivation for 30 to 90 seconds seems to have been the general cause, Feigin testified.

Feigin was the first of three pathologists to examine the toddler's body. None of the autopsy examinations settled on an exact cause of death. Indeed, Feigin conducted a so-called "second look" just one day after his first inconclusive examination.

A second autopsy was done by his assistant medical examiner, Dr. Charles Siebert, on the following Thursday, two days after Brendan was found. The final autopsy was performed the next day, Friday, by New Jersey Medical Examiner Dr. Andrew Falzon.

Shah set up Feigin's testimony on Wednesday by reviewing his experience.

Fuschino had attempted to bring up the so-called Boston Nanny case in 1997, when Feigin worked in Massachusetts, but Shah objected and the questioning was dropped. 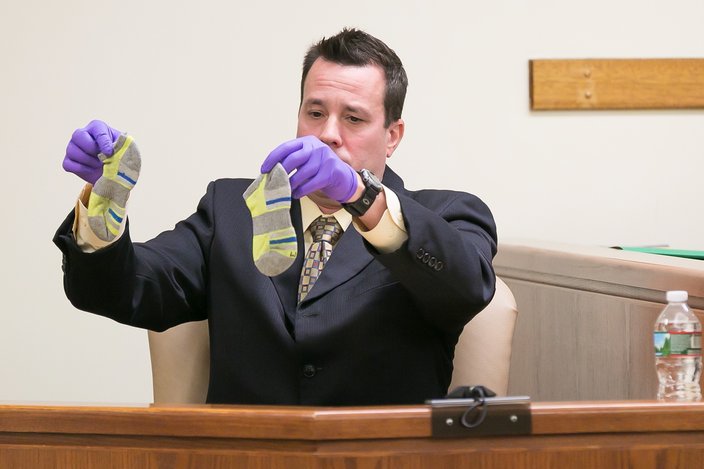 Detective William Rummel, of the Camden County Prosecutor's Office, holds the socks worn by Brendan Creato on the day his body was found, during testimony in the murder trial for the boy's father on Wednesday, May 3, 2017, at Camden County Superior Court.

Fuschino then asked if Feigin had failed to conduct a heart examination in another, more obscure Massachusetts case in which his supervisor overruled him, finding the death was not a homicide as Feigin had initially ruled.

Politics was the reason for the reversal, he testified. He soon resigned his post in that state.

Feigin admitted on the witness stand that, more recently, a victim's severed hand was overlooked at the scene of a Camden County car accident by his scene investigator and left along the side of the road. The hand was found later by family members of the victim.

His investigator had bad information in that case, Feigin testified.

Also Wednesday, a crime scene investigator showed the socks Brendan Creato was wearing when his body was found.

The prosecution had initially said the boy was found in "clean, white socks." But the socks shown by the County Prosecutor's Office detective, William Rummel, are actually mostly neon green and gray in a geometric pattern, with just a small amount of blue.