The firearms, often used for training exercises and action movies, are feared to be tools that can be turned into deadly weapons 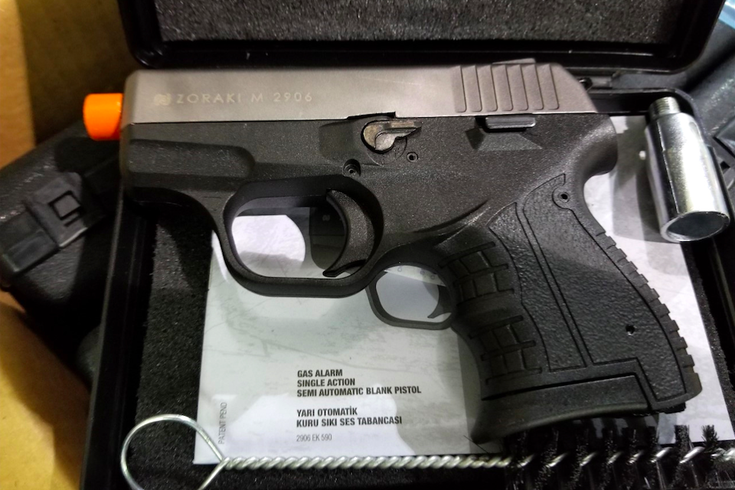 A Zoraki model M2906 blank firing pistol can be converted into a handgun that fires bullets. U.S. Customs agents seized a shipment of these pistols that came from Turkey and had a final shipping address listed in Bucks County, Pennsylvania.

Hundreds of blank firing pistols shipped to the United States from Turkey were seized last week by U.S. Customs officials at Washington Dulles International Airport. The firearms, some of which could be converted into working handguns, were supposed to reach an address in Bensalem, Bucks County.

Blank firing guns use "blank" cartridges that generate a muzzle flash and explosive sound — like at the start of a race — but do not fire a projectile. Some of these guns are assembled in a way that enables them to be easily converted for use as handguns.

The air cargo shipment arrived in Washington on April 29, when it was first inspected by U.S. Customs and Border Protection agents. The shipping manifest was labeled, "sporting blank gun," and the cargo consisted of 620 suspect blank firing guns of various models.

ATF agents who inspected the firearms determined that 240 Zoraki model M2906 pistols could be converted into firearms. The 9 mm handguns, manufactured by Atak Arms, are among the more popular blank firing pistol models used for training and theatrical purposes.

Guns like these increasingly have concerned law enforcement officials around the world who believe they are falling into the hands of criminals to be converted into deadly weapons.

The 240 Zoraki M2906 pistols were seized for violating import laws. They were appraised at approximately $19,000. The remaining 380 blank firing guns were released.

"Many communities continue to suffer under the siege of violent crimes often committed by armed and dangerous people, so keeping this shipment of easily converted firearms out of the hands of criminals is one way in which Customs and Border Protection can protect our families, friends and neighbors and help make our streets safer," said Keith Fleming, acting Director of Field Operations for CBP’s Baltimore Field Office.

The seized weapons represent part of a larger push to thwart weapon conversion and assembly of ghost guns, which have developed from a niche hobby into a common tactic used by criminals to make the possession and sale these of firearms untraceable.

Several states, including New Jersey, have banned the purchase of ghost gun kits to stem violent crime and illegal gun possession. In Pennsylvania, where buildable weapon kits remain legal, lawmakers have begun to explore ways to classify these kits as guns and regulate their production.