These easy-to-assemble firearms do not have serial numbers, meaning that they cannot be traced 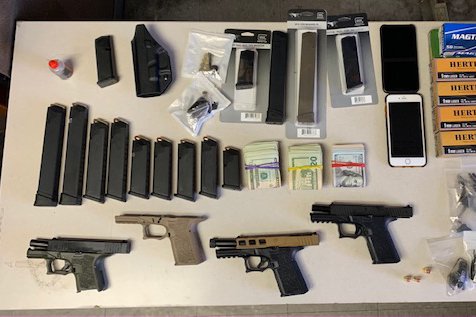 Source/Pennsylvania Office of the Attorney General

Four Philadelphia men are facing criminal charges for buying ready-made firearm kits in an alleged attempt to assemble and distribute illegal ghost guns across the city.

Najaye Davis, 19, was arrested Friday for participating in a criminal enterprise in which he was making and selling ghost guns for $500 each in Philly, according to Pennsylvania Attorney General Josh Shapiro said. Malachi Matthews, 46, Kenneth Manni, 41, and Montague Coker, 40, were arrested Tuesday in a separate case.

Ghost guns usually start as 80% receivers that are often sold in kits without background checks, prosecutors said. They can be assembled quickly and do not include serial numbers, preventing them from being traced. They function as full firearms.

Davis allegedly purchased multiple 80% receiver gun kits with large amounts of cash at the Morgantown Gun Show on Feb. 27. He left the gun show with another person and drove toward Philly, where investigators believed he was selling ghost guns.

Investigators seized three functional ghost guns, one 80% receiver, trigger assemblies and other firearm parts, more than 1,000 rounds of ammunition and multiple magazines — both loaded and unloaded — from Davis's home, Shapiro said. They also seized $8,600 in cash.

Davis has been charged with six counts of illegal transfer of a firearm and one count each of dealing in unlawful proceeds, corrupt organizations and conspiracy.

One day later, Matthews and Manni allegedly purchased four 80% receiver kits at the gun show. They were tracked to a Philadelphia home on 21st Street where investigators believed they were assembling and selling ghost guns.

Matthews, Manni and Coker were all on site during the execution of the search warrant. Coker and Matthews both attempted to flee through the roof of the building, Shapiro said.

Coker and Matthews are each previously-convicted felons who are not legally permitted to possess a firearm, Shapiro said. They were each charged with three counts of violating the Uniform Firearms Act.

Manni was charged with possession of a controlled substance, suspected to be fentanyl, and other violations of the Uniform Firearms Act.

"Ghost guns are fueling the gun violence epidemic that takes the lives of Pennsylvanians every single day," Shapiro said in a statement. "Once these DIY homemade gun kits are in the wrong hands, in mere hours they become untraceable, fully operational firearms causing so much senseless violence.

"The Office of Attorney General’s Gun Violence Task Force and Organized Crime Section, along with our federal and local law enforcement partners, are working overtime to target these gun traffickers and get illegal guns off our streets."

The ongoing investigations have been aided by several law enforcement agencies, including the Philadelphia police department, Shapiro said.