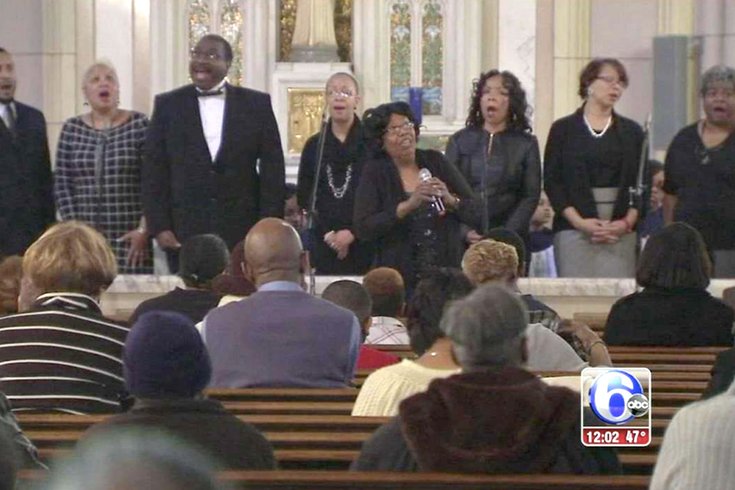 A rally for peace was held at 22nd Street and Lehigh Avenue in the Swampoodle neighborhood of North Philadelphia, the scene of the shooting. Organized by Operation Save Our City, a local community group, the rally paid tribute to Wilson while advocating peace and solutions to violence in Philadelphia.

Earlier this weekend, family members of the fallen offer expressed their grief and anger over Thursday's tragic killing, NBC 10 reports.
“I lost more than a brother," said Shakira Wilson-Burroughs, Officer Wilson's sister.  "He was my first friend, my true friend. I miss him.”
Wilson, 30, was in a GameStop store buying his nine-year-old son a birthday present when brothers Ramone Wilson, 24, and Carlton Hipps, 29, entered with semi-automatic guns and announced a robbery.
Shooting broke out when the two suspects, who are now in custody, saw Wilson. The eight-year veteran of the force continued to defend the store's patrons, firing back even after being hit multiple times with gunfire. He was hit nine times, taking at least one bullet to the head.
When news first broke of a shooting, Shakira texted her brother to see whether he was alright, but received no reply. Wilson was pronounced dead at 6:25 p.m. Thursday at Temple University Hospital. She lamented the fact that the two suspects acted senselessly without regard for better alternatives in life.
“Everything that my brother achieved, they could’ve achieved,” Shakira said. “I’m tired of it! What did you really think you were getting from GameStop? You trudged through the snow to rob a GameStop! You could trudge through the snow to get a job!”
Wilson's grandmother, Constance, added that serving as a police officer was what her grandson loved to do. With several family members in law enforcement, she was supportive of Robert's career.
RELATED STORY:  Ramsey: Officer killed protecting store customers
Efforts to support Officer Wilson's family have continued to build in the wake of his death.
Dan Aykroyd announced at the Philadelphia Flower show Friday that he will donate to a fund set up for Officer Wilson's children, according to NBC Los Angeles.
The actor and comedian was in Philadelphia for the show to promote his vodka, Crystal Head.
Aykroyd said he would try and set up a college provision or fund for Wilson's two children, according to Fox 29, and also commented on the incident:
“It was senseless. You've got guns in the hands of wrong people, and that's the bottom line.”
Members of California's gaming community also pitched in with a fundraiser for Officer Wilson.
"Let's show the world that as gamers we appreciate life and the sacrifice of other people will never be forgotten!" the page reads. It has already raised $250 of a goal set at $1,000.
The Philadelphia 76ers paid tribute to Officer Wilson before their game at The Wells Fargo Center Saturday night against the Atlanta Hawks, according to NBC 10. The team wore t-shirts during pregame warmups that honored the fallen officer:

All Pennsylvania flags at state facilities in Philadelphia and at the Capitol in Harrisburg were lowered to half-staff Friday to honor Wilson. The flags will remain lowered until sunset on the day of Wilson's interment, Gov. Tom Wolf said. In a statement, he said:

"I invite all Pennsylvanians to participate in this tribute to Officer Wilson. We will never forget Robert's sacrifice. His entire family and the men and women of the Philadelphia Police Department remain in our thoughts through this time of mourning."

Fellow police officers have organized a trust fund for Wilson's family. Wilson leaves behind two sons, aged 9 and 1. Folks can make donations in person at any one of the following Police and Fire Federal Credit Union locations:

Checks can also be mailed to the following address:

Michael Tanenbaum contributed to this report.