Legendary British actor Alan Rickman, whose versatility and inspiring presence earned him a range of defining roles, died Thursday at the age of 69 after a battle with cancer. As Professor Snape, the multigenerational star became an icon among the hardcore fanbase of the Harry Potter franchise and, fittingly, lead castmate Daniel Radcliffe took a moment to reflect on Rickman's kindness and commitment to supporting his growth as an actor.

In a post Thursday afternoon on his Google+ page, Radcliffe, 26, said film and theatre stages "are all far poorer" for the loss of Rickman. 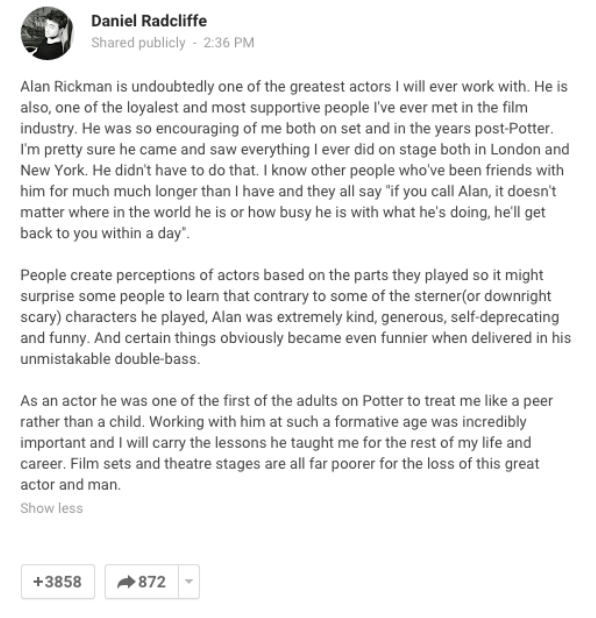 J.K. Rowling, author of the Harry Potter series, also expressed her gratitude for Rickman's contributions as both a man and an actor in a pair of tweets.

There are no words to express how shocked and devastated I am to hear of Alan Rickman's death. He was a magnificent actor & a wonderful man.

My thoughts are with Rima and the rest of Alan's family. We have all lost a great talent. They have lost part of their hearts.

Emma Watson, who plays Hermione Granger in the 'Harry Potter' films, said in a Facebook post that she feels "lucky" to have worked with Rickman.

I'm very sad to hear about Alan today. I feel so lucky to have worked and spent time with such a special man and actor. I'll really miss our conversations. RIP Alan. We love you.

Elsewhere, Emma Thompson, who starred in Rickman's 1995 directorial debut 'The Winter Guest,' called him "the finest of actors and directors" in a statement published by The Guardian:

What I remember most in this moment of painful leave-taking is his humour, intelligence, wisdom and kindness. His capacity to fell you with a look or lift you with a word. The intransigence which made him the great artist he was – his ineffable and cynical wit, the clarity with which he saw most things, including me, and the fact that he never spared me the view. I learned a lot from him. He was the finest of actors and directors. I couldn’t wait to see what he was going to do with his face next. I consider myself hugely privileged to have worked with him so many times and to have been directed by him.

He was the ultimate ally. In life, art and politics. I trusted him absolutely. He was, above all things, a rare and unique human being and we shall not see his like again.

New Jersey native and director Kevin Smith, who cast Rickman as the "Voice of God" Metatron in 'Dogma' (1999), posted a tribute on his Facebook page, calling Rickman "one of the greatest actors that ever lived."

Thank you for lending a hack like me your artistry and your credibility, Alan. You were never Snape to me as much as you were the adult Harry Potter himself: a bonafide wizard who could conjure absolute magic using merely words. He was a HUGE cauldron of win, this man. I'll miss him forever. Rest in Peace, Voice of God. Back to Heaven, where you came from...

Rickman, who will appear posthumously in drone warfare thriller 'Eye in the Sky,' most recently produced the voiceover for the short film "This Tortoise Could Save a Life," a benefit project to support Save the Children and Refugee Council.