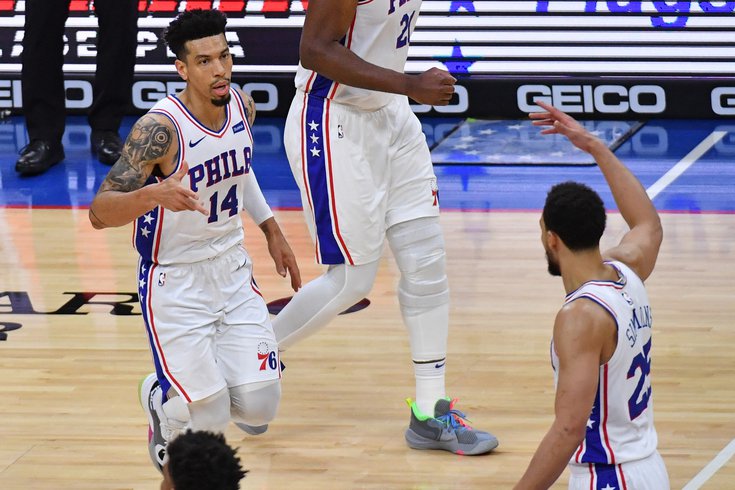 Ben Simmons' potential return to Philadelphia on March 10th would be one of the biggest sports spectacles we've had in Philadelphia in recent memory. But the subject of whether he will ultimately play or not has already been hotly debated in league circles, and count former Sixers teammate Danny Green among the doubters.

During the most recent episode of his Inside the Green Room podcast, Green sat down with host Harrison Sanford to discuss a number of topics, including James Harden's arrival in Philadelphia and the travesty of this past weekend's dunk contest. Eventually, the two would get to the subject of Brooklyn's March 10th matchup with the Sixers, and Green laid out his thoughts on a lot of things:

Sanford: On March 10th, he can potentially return to Wells Fargo Center as a member of the Brooklyn Nets and he can play against you. When the game is over, are you shaking hands?

Now will we shake hands to start? Probably not. First, I'd be highly surprised if he even plays in that game. I don't know where his health is mentally, physically, I know he had other issues, and we all know he does not like to play in Philly. If he does play in that game, I'd be highly surprised. But say that does happen, I see it as being a very hectic, playoff-like atmosphere and environment to where it may be very rough for him. I don't have any ill will toward the guy, I don't hate him I don't dislike him, it's just for me, it's whatever. I waste more energy going out of my way to dislike him, or spend energy trying to go out of my way to hate him or do things to him. If he comes up and shows love, I'll say what's up, that's the type of deal I'm on. I'm not the type of guy to not say what's up to people that say what's up to me.

Green: That's it, let bygones be bygones. I understand you have a mental health issue, I understand you don't want to play where you want to — whatever it is, you did what you needed to do to make better for you in your life. That's cool. Do I think you could have handled it better? For sure, because we had nothing against you as teammates, still have nothing against you. But it all depends on how that game goes, how he interacts in that game, how well he plays or how cleanly or non-cleanly he or us plays against each other, is going to determine how we shake hands. But I highly doubt he plays in that game, and if he does, I highly doubt he wants to shake hands before or after that game. [Inside the Green Room]

Let me just say, first and foremost, that the concept of Danny Green having a podcast is extremely funny to me, not because he doesn't warrant having one or because he's bad at doing so, but because he just tends to say whatever he thinks and feels with little filter. It's a blessing for someone who writes about the Sixers for a living, one area where you don't have to read between the lines and interpret like you do with a lot of podium quotes.

In any case, Simmons no-showing the March 10th game wouldn't be a huge surprise to anyone who has watched this saga unfold. There are lot of people licking their chops thinking about the opportunity to let Simmons have it after he publicly turned his back on the organization and the city, and responding to conflict has not exactly been Simmons' strong suit throughout his career. Whatever you think of his various explanations for wanting out of here, his desire to get out of Philadelphia was significant, and he's aware as anyone else is that making that clear will result in a firestorm whenever he comes back.

Here's the problem as I see it — if he returns to the lineup before that meeting with Philadelphia, Simmons is almost certainly better off using this as a "rip off the Band-Aid" moment. The spotlight on him will be bright, and the setting might be a bit overwhelming, but getting that first meeting out of the way in a relatively consequence-free game in March is much better than saving it for a potential playoff meeting down the road. If the first time these teams meet with Simmons in uniform is during a postseason matchup, the roof of the Wells Fargo Center might cave in from booing. And I would argue that if he plays before the March 10th meeting and then pulls out due to a nebulous issue like back tightness, he's only going to invite more scrutiny on himself at a national level, calling his ability to perform under pressure into question once again. Show up for this one, and all signs point to people wagging their finger at mean Philadelphia fans and then moving on.

(On the other hand, if Simmons doesn't return to the floor before the March 10th meeting with Philadelphia, the Nets might legitimately end up in danger of missing the playoffs. Every single game between now and March 10th is against a team either firmly in the playoffs or eligible for the play-in tourney right now, an eight-game stretch that could put Brooklyn behind the eight ball heading into the final month of the season. They absolutely need him and Kevin Durant to be in the lineup sooner than later, even if Kyrie Irving becomes a full-time player once vaccine mandates change in New York City.)

You could make the case that the more interesting angle here is the Curry/Drummond dynamic, and I wouldn't necessarily argue with you. The Drummond side of the equation doesn't mean a whole lot just because they never actually played together, but Curry spent all of last season in the starting lineup alongside Simmons, and will presumably play a big role in Brooklyn next to Simmons. Curry was asked to do a lot more heavy lifting in the playoffs as a result of Simmons' on-court meltdown, and he kept things mostly professional when he talked about the Simmons situation hanging over this year's team in Philly.

"I just view it as like a guy who got a long [term] injury," Curry told HoopsHype in November. "I focus on who we have on the team, who comes to practice every day, who’s at shootaround, and how we’re preparing for the games. It’s unfortunate he’s not with us because he’s obviously a big part of the team and a great player who can help us win even more, but everybody has their own situation in this league. It’s a business."

No business will benefit more than parking lot t-shirt salesmen in South Philly on March 10th. We'll have to wait and see if Simmons is up for the occasion or not.