Eytan Shander: The only way for the Eagles to catch the Sixers is to trade for Russell Wilson

If the Eagles want to take back the headlines from Harden and Embiid, they must trade for Russell Wilson 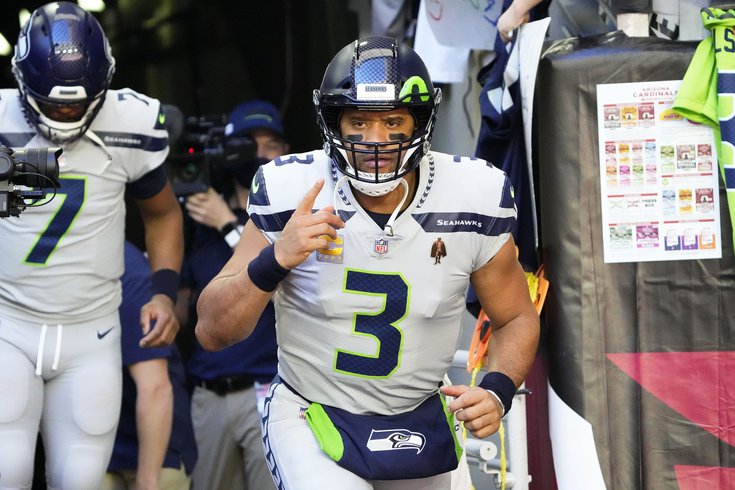 The Eagles acquiring Russell Wilson would surely steal the headlines away from James Harden and the Sixers.

Save the season. Check.

Daryl Morey did last week what most thought would take a summer — saving one man’s MVP bid, the team’s championship hopes, and the city’s lone hope for a winner.

That is, unless the Philadelphia Eagles can do something that would trump the arrival of James Harden to Philadelphia. It would take a massive push to land a big name QB like Russell Wilson or Aaron Rodgers – the former having some loose link to Philly.

That’s been the question of the year – is trading multiple first-round picks for a guy who struggled last season worth it?

This has little to do with Jalen Hurts and the confidence I have in him if the Eagles brough him back. Trading for Wilson isn’t even my first choice for what to do with those picks, but I recognize the opportunity and present value.

No doubt that Wilson is one of the best QBs in the NFL but is coming off a rough year all-around in Seattle. Even if his price drops a small amount, it’s better than what Rodgers would cost following an MVP season. It makes sense to establish an identity for this team with a veteran QB who still has enough time in the game to be a building block. More importantly, to be able to build around him.

Much like the national attention-grabbers at the usual suspect networks ignorantly piled on to defend Ben Simmons from his own undoing, they will miss another key element only known to the locals of Philadelphia – headlines.

It used to be a running joke, back when the Phillies were not a running joke, anything that the 2008 era Phils' team did must be trumped by the Eagles – for headlines. I laughed it off until I started working at WIP and saw the connections. It was uncanny, the Phillies would do something, anything of importance, and the Eagles would hold a presser, announce a player’s “day” in the city, or just randomly throw Joe Banner on with Howard Eskin.

This move by Morey, this game-changing franchise-altering move by the only other team with something going for it (we acknowledge and love the Union and Nova hoops, but they don’t get the same attention) will not go unnoticed by the Eagles.

This is the same Eagles team that’s been seen as fickle with their overall decision-making as they have been with quarterbacks. It's the same front office that fired and scapegoated people after good seasons. And the same owner who has governed on a whim – including just giving away the power of his team to Chip Kelly while metaphorically hiding in a corner.

This is right out of a movie – some belligerent politician slams the desk in the heat of an election at the sight of their opponent bringing joy to the city. “What the hell can we do to get our headlines back?”

Yes, being routinely talked about – for better or worse – is what the Philadelphia Eagles want, and the fact that we are an “Eagles city” makes for an even bigger push.

We can’t handle another pro team of any sort because we don’t have enough time in the day to handle what we currently have. The Union are an afterthought and only discussed on the radio on Fox Sports Radio the Gambler. Same with Nova hoops until the tournament begins, then everyone turns into bracketologists — even though the radio spent more time arguing over whether they deserved a parade downtown.

The Flyers and Phillies are big-time pro teams in major pro leagues and are often forgotten about in general conversation. Even with a push to the postseason, we see short lived bumps of attention for both teams. The average person consuming Philadelphia sports media either doesn’t want or doesn’t care about those teams more than a blip. It’s a quick hit in a news report.

So here comes Daryl Morey and his big ideas, one that actually came to fruition and ruptured the current power structure. The city of Philadelphia is as much of a basketball town as it is a football town, the older folks just want you to think otherwise. Yes, at 42 I’m calling out my own age group and higher, because the youth movement in this city is swept up by the NBA and Sixers.

That has to be a major concern for the Philadelphia Eagles who look across the street and see built-in discussion about Embiid, Harden, Morey, and the huge trade. There are “was it worth it?” radio shows locked in for the next year. No way Mr. Lurie and Mr. Roseman like that, nope.

What’s old is new again — be it nostalgia in a TV show, a power grab for headlines, or global politics. The only way the Eagles can steal back any major headlines would be to make this major push for Wilson – but this is also grounded in some reality.

Let’s not paint Lurie and Roseman as some maniacal tandem of dictators just throwing out orders based on how they woke up in the morning. The move to trade for Wilson is grounded in the reality that they have the ammo to make the deal, and that it makes the team better.

Nobody is coming out saying the Eagles should trade for Pat Mahomes or Josh Allen, rather a reasonable discussion about the realistic possibility of landing Wilson. That, along with the Sixers now owning the headlines for the foreseeable future, makes an interesting parlay of circumstances.

The only way for the NovaCare to take back the headlines from Harden and Embiid, and truly keep the pendulum on the Eagles’ side, would be to trade for Russell Wilson.