NFL trade rumors: Why do sportsbooks think Russell Wilson is more likely to be an Eagle now? 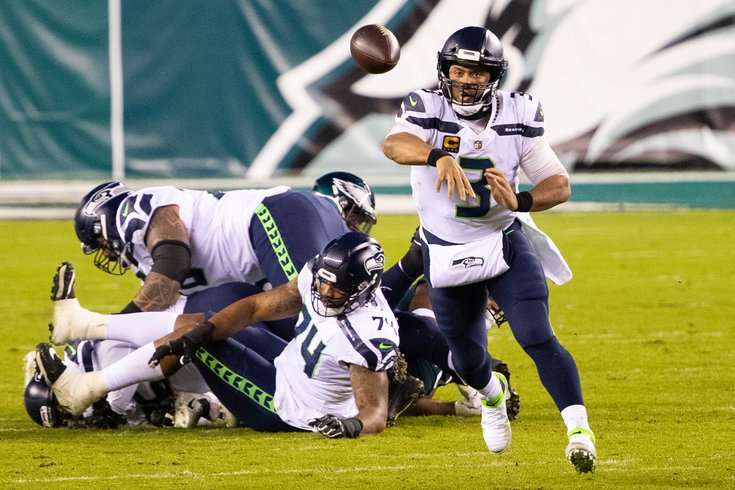 Following the conclusion of Super Bowl LVI, the timing seemed right to check in on some interesting futures odds regarding a pair of superstar quarterbacks who may or may not be on the move this offseason.

On February 16, BetOnline foresaw the Bucs had the best chance of landing Russell Wilson, who is still under contract with the Seahawks but is reportedly frustrated and looking to potentially move to a contender. The Eagles were way way down at the bottom of the odds list, with a 40-1 chance of getting Wilson — behind 17 other NFL teams. They actually slotted higher for Aaron Rodgers, for whatever reason, with 20-1 odds — behind 11 teams.

All of this likely means nothing, and really illustrates that oftentimes these futures bets are pretty meaningless.

However, they are adjusting. Adjusting to what is hard to say. But just over a week after the aforementioned Wilson odds, BetOnline has the Eagles tied with Miami as front-runners for Wilson at 5-1 odds. For what it's worth, the Eagles remain at 20-1 for Rodgers.

The weird thing is, nothing really has happened. Some musings in mailbags, ranging from our own Jimmy Kempski to Sports Illustrated's Albert Breer exploring the possibility, but there has been no real concrete news to move the needle on the odds — especially to the tune of improving them eightfold.

The more you really look into Wilson's situation in Seattle, a team that underachieved for its worst record this past season since Tavares Jackson was the starting QB in 2011, the less you can really see a trade of any kind — to the Eagles or anyone else — making sense.

Here's what the Boston Globe's Ben Volin had to say earlier this week:

▪ Russell Wilson, Seahawks: Wilson’s camp has sent mixed messages — first his agent went on the record last offseason with a list of four teams to which Wilson would accept a trade, but Wilson denied that he requested a trade, and last week told Mad Dog Sports Radio that “my hope and goal is to be back and keep winning there.” This may just be about Wilson’s contract, which has two years and $50 million left, nearly half the going rate of the top quarterbacks. My prediction is Wilson stays in Seattle and gets a pay raise. [Boston Globe]

And here's a look at Sports Illustrated Connor Orr's take on the rumors:

Wilson continues to have his cake and eat it, too, in terms of public opinion. Outwardly, there are the legally bulletproof statements professing a desire to win, intimating that he wants to do so in Seattle while theoretically allowing his agent to find greener pastures elsewhere. The Seahawks got a legitimate trade offer last year from the Bears and could find themselves bombarded this offseason leading up to the draft. Here’s what I find most interesting about any and all of those negotiations: What would motivate the Seahawks to do it now? Wilson’s dead cap cuts in half next year. He’s entering his age-35 season in 2023, and they could defer any package until next season when the picks could be infinitely more valuable. This draft lacks a superstar quarterback and thus lacks the kind of necessary resource scarcity that helps those picks multiply. If Wilson refuses to play, so what? The Seahawks were going to be bad if they traded him, and they’ll be bad with him sitting on the bench. Eventually, someone will trade for him. They can do it on their own terms. [Sports Illustrated]

It's obviously fun to talk about trades, and BetOnline.ag must have gotten a lot of action on their formerly long Wilson-to-Philly odds to prompt the big swing. But the Eagles seem content with Jalen Hurts, and the Seahawks would likely be demanding a king's ransom knowing they'll be taking a huge cap hit — ironically similar to what Philly did after trading Carson Wentz last season.

The price for Wilson would probably exceed that of Wentz. The Colts spent a first and third round pick on Wentz last winter. Maybe that's the wrong template. Here's what Pro Football Focus could see the price being as they project the trade, among 14 others the publication could see happening this offseason:

The Eagles try to follow the Los Angeles Rams’ precedent here with a similar value trade for Russell Wilson, who is the same age as Matthew Stafford and has a similar remaining contract as Stafford did last offseason. The issue with trying to reconcile the Stafford-for-Jared Goff trade value is: How was Goff valued in the deal?

There’s a possibility the blockbuster trade was truly:

Goff and a 1st → Lions for salary relief

Mike Renner’s recent mock draft has Wilson headed to the Eagles, with the Seahawks hitting the reset button at quarterback. Philadelphia inherits a quarterback who earned over three wins above replacement on average from 2012 to 2020. When factoring in the first- and second-round picks the Eagles acquired from the Indianapolis Colts, they end up close to net even in a swap of Carson Wentz for Russell Wilson. [Pro Football Focus]

The Eagles getting Wilson while keeping two of their 2022 first round picks seems like a victory, and perhaps they could recoup the 2023 pick by swapping one of their multiple first round picks this year. This move would, however, eat up pretty much all of the Birds' cap space this coming season and force them to once again hunt for bargains to upgrade their defense and receiving corps.

Wilson has not formally requested a trade, and he does not have the Eagles currently listed as a team where he would welcome a trade. Maybe the oddsmakers know something we don't. It will be interesting to see if more news breaks in the coming weeks that make the Eagles feel like a true odds-on favorite to land the star QB of their dreams.