Who should Sixers' fifth starter be with James Harden in lineup? 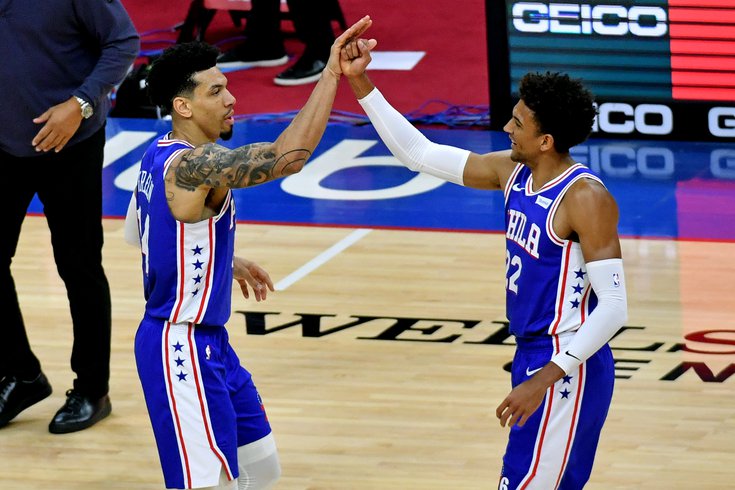 The Sixers can go a few different ways with their fifth starter alongside James Harden and company.

The Sixers are days away from what many expect will be James Harden's debut in a Sixers uniform, opening a new chapter in team history after a long and agonizing wait. It seems crazy to say this, but the Sixers have an MVP candidate and a player who was honored as one of the greatest 75 players in the history of the game this past weekend, and they're not the same person.

Harden's presence, naturally, will elevate the focus on the small decisions and details that are made by the coach, his teammates, and certainly by his co-star, so we're going to take a look at a few upcoming plot lines before Philadelphia returns to action. We start today with, naturally, the starting group, and how Doc Rivers might decide to set this team up. With the well-founded assumption that Embiid/Harris/Harden/Maxey is locked in as a foursome to open and close games, let's look at a few options to stick in between them.

Out of the gate, the first thing this group has to figure out is how they're going to defend on the perimeter. James Harden is actually an upgrade on that end over previous starter Seth Curry, which is wild to think about given Harden's rep and production there, but he is certainly not going to be the guy taking No. 1 defensive assignments every night. The simplest fix is to just play your best perimeter defender and let the rest sort itself out.

There is one major point of concern with this path — Thybulle has dampened the offensive effectiveness of just about every lineup he has played in this season. The Sixers are 5.2 points per 100 possessions worse on offense with Thybulle on the floor, putting him in the bottom fifth of all players in the league according to Cleaning The Glass. Zoom in further, and you can see why anyone might be concerned about putting Thybulle on the floor instead of, well, just about any reliable shooter:

Those numbers are really ugly. What's alarming here is not the comparison to other lineups, necessarily, because these numbers don't factor in things like the strength of the opponent/opposing lineup they're up against. The problem is that Thybulle had a bigger chance than any other rotation player to serve as the fifth wheel in Philadelphia's most-played lineup, and that grouping did not work on any level. Thybulle was akin to a bandaid for a jugular wound on defense, and his impact to spacing constricted what Philadelphia could accomplish on offense, which is reflected in the success they've had with basically every other version of that group.

To Thybulle's credit, he has taken strides (at least anecdotally) as an off-ball player, finding chemistry as a cutter and target in the dunker's spot when the offense is running through Joel Embiid. In the team's recent dominant win over the Cavaliers, Thybulle scored a couple of easy buckets early in the game as a result of Cleveland abandoning him to double Embiid. Dating back to his medal run with Team Australia last summer, Thybulle has shown improved instincts that might help him overcome whatever his limitations are.

On top of that, Thybulle's cutting might end up being even more impactful with a playmaker of Harden's caliber on the floor. Asking Embiid to find Thybulle consistently when pressure comes is a big ask, but it's a more reasonable expectation for the guy who effectively is your new point guard. Whatever Embiid doesn't bring to the table as a lob target in pick-and-roll, Thybulle might be able to make up for as a late cutter for Harden to find for dunks. He certainly has the explosiveness to go up and punch one through if the passer is capable.

My case against Thybulle as the fifth starter/closer is a pretty simple one — I don't think this group is going to win with defense regardless of whether you put Thybulle in there or not. The best possible version of this current group is still likely to get carved up by good offensive teams, with concerns ranging from Harden's bouts of apathy to Maxey's lack of size to Harris' off-ball habits. Your fifth starter, even a fifth starter who has the defensive chops of Thybulle, is not likely to change that, and you should probably try to maximize their offensive ceiling instead.

The corner shooter: Danny Green (or choose your bench player)

Even as a longtime Danny Green booster, I have a lot of trepidation banking on Green in a prominent role of any kind this season. He has not moved very well when he has been on the floor, and those runs in the lineup have been scattered throughout the season as a result of soft-tissue injuries. You have to account for the possibility that Green doesn't have much left — he turns 35 in late June and has played over 24,000 minutes between the regular season and playoffs, with lots of deep runs for several different franchises.

But if Danny Green can do one thing, he can operate from and succeed in the corner, which is suddenly an even bigger need for Philadelphia with James Harden in town. Harden has been a prolific creator of corner threes for the majority of his NBA career, and even veteran players with established skill sets have changed their habits while playing alongside him.

An example of that effect: former Nets teammate Patty Mills has been a prolific shooter throughout his career, but saw his corner attempts rise considerably in Brooklyn, making up over 27 percent of all shot attempts for Mills this season. The right corner, where Harden would be looking while going to his left out of the pick-and-roll, saw Mills' biggest jump in frequency of any shot type this season:

Like Embiid, Harden loves to have a static target in the corner where he knows he can find his man when a defense collapses on him. PJ Tucker's success out of the corner playing off of Harden allowed him to carve out a lane beyond his defensive contributions, and any number of role players have been able to succeed playing next to Harden by simply making the shots he can create for them. And unlike a lot of Philadelphia's role players, Green has a quick release and isn't shy about getting shots up, which Harden and Embiid are both known to appreciate.

Still, putting Green in this spot leaves the Sixers very susceptible to being torched by teams with quickness and athleticism from roughly the 1-3 spots. We saw how it went when Green was tasked with chasing Trae Young around early in last year's Hawks series, and the Sixers would almost certainly be putting a lot of pressure on Embiid to be an all-world defender on the back end. Green's usefulness as a help defender and commitment to transition defense sets him apart from other guys in the rotation, but it deserves repeating here that he may simply not be reliable enough for a high-profile role at this point.

Korkmaz would be a much more controversial version of this same choice, namely because he has shot like crap for most of this season. Going away from Thybulle for Green won't be popular in some corners of Sixers fandom, but you can at least justify it with numbers to some extent. You'd basically be presenting, "Dude, trust me!" as your explanation for putting Korkmaz in the same spot, hoping that he could offer more if he was relegated to a more static, set-shooting role within this group.

If I had to place a wager, I think the Green version of this lineup is the one the Sixers will end up in when push comes to shove, even if they don't want to go that way to start. I don't trust Thybulle to shoot when it matters, and when Doc Rivers was faced with a team who ignored Thybulle last week, he was quick to pull the plug and space the floor around Embiid and Co.

Niang in this lineup probably has the highest disaster potential for this reason: your team foot speed on defense with Harden, Harris, and Niang at the 2-4 spots is downright insulting, leaving you susceptible to blow-bys from any number of competent perimeter players around the league.

But in the right context, with the right opponent in front of them, it appears the Sixers can actually get away with playing Niang/Harris at forward and just betting on the spacing gain being good enough to nullify all other concerns. That's doubly true if Niang can find a defensive assignment he can handle with that group, which ended up being the case when he played credible defense against Giannis Antetokounmpo during a statement win last Thursday.

There are going to be teams where Niang simply cannot feature as a starter, certainly wing-heavy or guard-heavy teams like the Celtics and Raptors that the Sixers could end up seeing in a round one series. The scenario the Sixers want to avoid at all costs is one where Niang is being switch-hunted by other teams, because he just simply doesn't have the chops to defend smaller guys in isolation. Allow him to go body-on-body with someone in the post and he's fairly sturdy, but Niang frequently gets blown by or takes desperation fouls when taking tougher assignments.

If Rivers has been clear about one thing this season, it's that they no longer have the luxury of simply lining up the same group every night and starting them together no matter what. I think that's how Niang will ultimately factor into this decision — he's not going to sniff the starting lineup against a lot of their toughest competition, but every so often, the trust his coach has in him will get him a spot opportunity.