When a sports franchise wins a lot, and the most key figures in the organization have been caught cheating multiple times, fans of other teams around the league tend to begin to hate that team.

According to data from betonline.ag, the Eagles are the overwhelming popular pick in the Super Bowl over the Patriots. as show in this map: 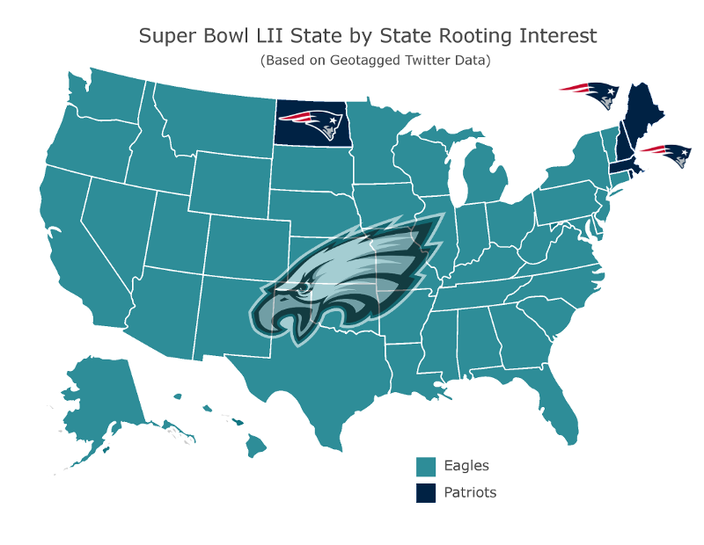 Only five states support the Patriots, according to the study:

That map is based on geotagged twitter data immediately after the AFC and NFC championship games (over 500,000 tweets).

As you can see literally everyone except those in the New England area, and randomly North Dakota, are rooting for The Eagles, which isn't that surprising as The Patriots are going to their 8th Super Bowl in the Brady/Belichick era.

The data was compiled and mapped by the NFL guys over at betonline.ag, using software with direct access to geotagged twitted data.

I'll disagree that North Dakota is random. Most North Dakotans are Minnesota Vikings fans, so they may just be upset at the butt-whipping administered by the Eagles last Sunday. Although, it's maybe a little surprising they're not rooting for Carson Wentz, unless they don't want to see his backup take home the prize.

Here's a state-by-state number breakdown of the data:

"I do know this," said Jim Schwartz, "and I felt this after the game, and I think everybody here felt how much this city celebrated with our team. It's been a while since the Eagles have been in the Super Bowl. We haven't won one, and I think that the fans that are able to make it to Minneapolis, just like the fans that made it to Los Angeles, and so many other places along the way for us, they'll turn it into a home crowd for us."

"Our Eagles fans travel. It's tough travel. The Super Bowl is a tough ticket, but I think we're gonna see a lot of green and we're gonna hear a lot of people singing our fight song. I'm hoping that it's not a neutral site."