Day 3 NFL Combine preview: Defensive linemen to watch who could interest the Eagles 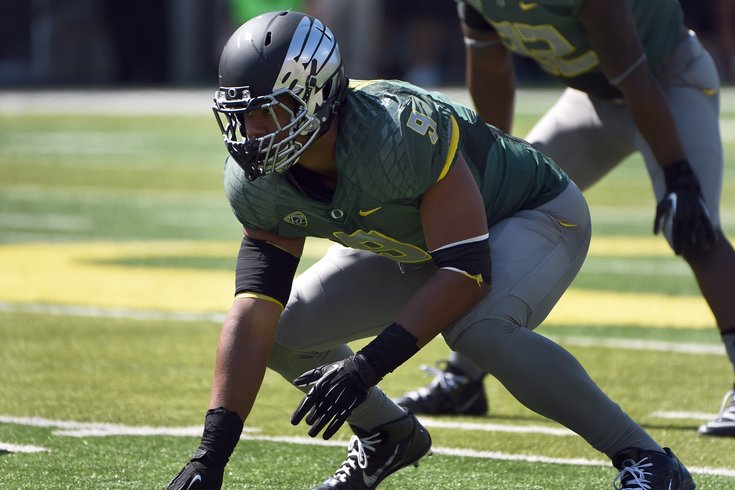 The Eagles are strong along their DL, but #DuckBias DE Arik Armstead is a player Chip Kelly is familiar with.

INDIANAPOLIS -- After two days of watching players on offense work out, it's the defense's turn, beginning with the defensive line. In case you missed any of our offensive previews, you can find them at the bottom of this post:

• Henry Anderson, DE, Stanford (6'6, 294): Anderson is very nimble for his size, and was disruptive in stretches during the week of Senior Bowl practices.

Armstead is obviously huge, and was a heavily recruited player out of high school for his blend of size and agility. His production in college was disappointing, but the size-speed snobs of the NFL will love his ceiling.

And, you know, Oregon.

• Carl Davis, DE, Iowa (6'5, 320): After three days of practices, Davis was voted by a panel of NFL scouts to have been the most outstanding player in practices during Senior Bowl week.

“Well, those monster noses are ideal," he said. "There’s not very many of them out there and they come around every five years maybe. And what we do is we have good football players, like I said, and we get them at the heaviest weight that they can function well at and make ‘em fit and ask ‘em to do the things they can do the best. And when that monster comes along and you’re in a position to acquire him, you acquire him. And that’s the old 3-4 where the guy just eats up three blockers inside. But they’re hard to find. They really are. We’re really happy with the D-Linemen that we have and how they’re progressing. So we’re excited about the group that’s in there. It’s a good young group, really eager and energetic and they’ve been working hard.”

Phillips hasn't been discussed as a possible target for the Eagles in the first round, but maybe he should be.

• Bobby Richardson, DE, Indiana (6'3, 283): Richardson is an athletic defensive end coming from a 3-4 defense in college, and while his height isn't ideal, his 34 5/8 arms make him longer than his listed height.

• Preston Smith, DE, Mississippi State (6'5, 271): Preston Smith was the Eagles' second round pick in my first mock draft of the offseason:

Smith is an extremely versatile player who can stand up and play the predator position in a 3-4 front as well as DE. At Mississippi State, the Bulldogs also lined him up at NT on obvious passing downs. Trent Cole could be gone this offseason if he and the Eagles can't come to an agreement on a pay cut. Even if they can work something out, he turns 33 in October. Meanwhile, Brandon Graham is almost certainly going to draw heavy interest in the free agent market, and the Eagles may have to make a tough decision on whether or not to overpay to retain him.

Smith would give the Eagles some depth at multiple positions, and could eventually be a player that never comes off the field, while helping allow the Eagles to disguise what they're doing defensively.

• Leterrius Walton, DE, Central Michigan (6'5, 319): In Chip Kelly's and Billy Davis' first offseason in Philly, they had Ricky Jean-Francois in for a visit, but Jean-Francois would eventually sign a ridiculous 4 year, $22 million deal with the Colts. Why do I bring up Jean-Francois? Because that's the comp that Walton received by NFL.com:

SOURCES TELL US: "I have a feeling he's going to be one of those guys who ends up being an NFL player that nobody sees coming. He was a baseball and basketball player, which means he has good hands and feet. More coaching might be able to unlock an NFL player." -- AFC West scout

BOTTOM LINE: High-motor interior lineman who could become a five-technique in a 3-4 defense with more technique work. Walton has the traits to become an above-average player against the run and should be able to play in both odd and even fronts.