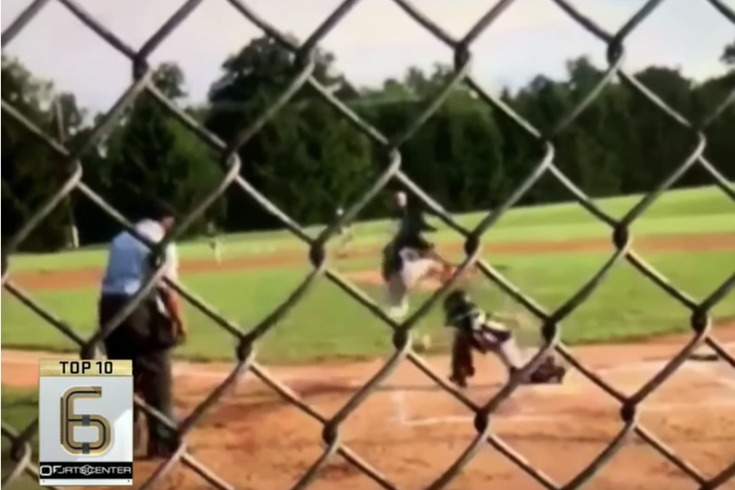 Shaun Kemple, 9, of Delaware County, prepares to hurdle the catcher during a Little League game over the weekend. Kemple's play landed on SportsCenter's Top 10.

Local high school and college athletes often find themselves in SportsCenter's daily Top 10 when something particularly spectacular happens, like this dunk from a La Salle College High School basketball player.

MORE: How a very good dog is helping a local vet escape the lingering effects of war

Yet that's where Delaware County resident Shaun Kemble found himself Tuesday morning, with his spectacular leaping play from a Little League game in Marple Township.

Kemble's parents, Lauren and Michael, shared the video on Facebook on Monday morning, and by Monday night the clip was featured in the nightly Top 10, at No. 9. By Tuesday morning, the highlight was up to No. 6:

In case you want to see what beat Kemble's heroics, you can watch Tuesday's full SportsCenter Top 10 clip package here.

"Every 9 yr old little leaguers dream? To make Sportscenter?" Kemble's mother Lauren wrote in the above Facebook post Tuesday morning. "Could not be prouder of this kid and his team!"

Kemble made that play look insanely easy, considering the degree of difficulty. Don't forget how hard it looked when Bryce Harper made an attempt at the same play earlier this season:

Bryce Harper really did try to hurdle Willians Astudillo like a damn running back. pic.twitter.com/yGmEE50pQS

We're going to give Kemple the edge. Maybe he'd be able to get the Phillies out of their recent slump.