Geoff Dempsey was haunted by things he saw in Afghanistan, but an 18-month old canine lightened his mental load 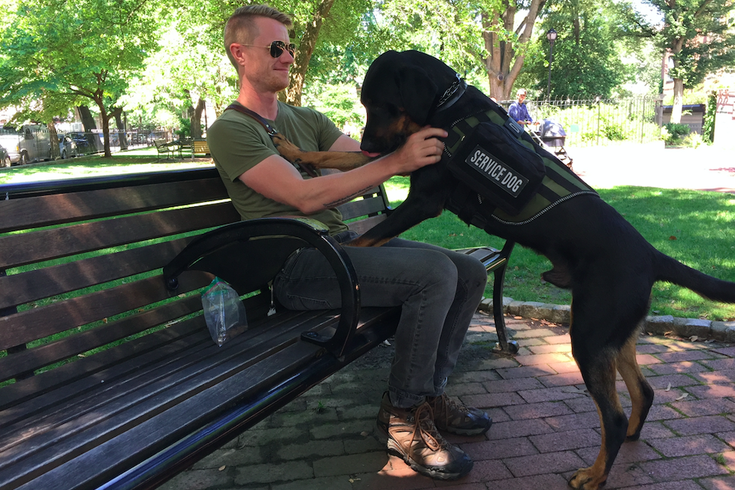 Geoff Dempsey said he felt an instant connection with Maverick, a black-and-tan lab who helps him escape a shell brought about by PTSD stemming from his service with the U.S. Marines in Afghanistan.

In late April, Geoff Dempsey flew from Philadelphia to Florida knowing he would soon meet his new best friend without any idea who, exactly, that was.

He and six other veterans – each still troubled by their time in the service – waited in line. One by one, they walked outside of K9s for Warriors headquarters in Ponte Verde for the big moment.

There, the 30-year-old, who served for five years including an eight-month tour in Afghanistan with his fellow U.S. Marines, was introduced to Maverick, a one-and-a-half-year-old black-and tan lab. They hit it off on the spot.

That connection was clearly evident when the duo arrived at Philadelphia’s Fitler Square Park two months later to talk about a non-profit program that matches veterans with “life-changing service dogs.”

In Dempsey’s case, it was all about being saddled with post-traumatic stress disorder related to his military service.

“He was licking me, sniffing me. I felt an instant connection,” he recalled with a smile on Monday morning, with Maverick at his side. “It was clear that he had a lot of love to give.

“Things have been a lot better with him around. He distracts me from the past and brings me into the present, which has been an issue since Afghanistan. I’d been ignoring the present, stuck in the past. He doesn’t let me do that.”

‘I NEVER FELT THAT URGE’

Dempsey’s path to this moment started in 2006. Upon graduating from high school in Massachusetts, he tried a semester at Framingham State University, but that wasn’t for him at that point in time.

Enlisting in the military was long an option in the back of his mind, so he decided to take that leap, joining the Marines since he considered them the most hardcore of the service branches.

On December 26, 2006, he was off to boot camp in Parris Island, South Carolina. Three months later came combat training in North Carolina. That was followed by time specializing in communications at the Marine Corps Air Ground Combat Center in Twentynine Palms, California.

Keeping bases connected and ensuring access to communications for fellow soldiers was his primary responsibility, but Marines are trained in a variety of skills and receive a wide array of assignments.

He would first head to Afghanistan in 2009. There, on guard-post duty, his life would take a turn for the worse.

"You’re not supposed to open up, because opening up gets in the way of maintaining that ‘hard shell.'" – Geoff Dempsey

“I don’t want to get specific about that,” he said, pointedly, when asked about what he witnessed that day. “But yeah, it happened at the guard post.”

When Dempsey’s five-year stint came to a close in December 2011, he tried the academic route again, but he couldn’t entirely break free.

Soon, he’d learn that two of his friends from the Corps committed suicide, with two more to take their own lives shortly thereafter. Those are just the ones he knows about; there could be more.

It seemed as if they – and he – could never truly escape the rigors of war.

“You’re expected to be strong and keep things to yourself. You’re not supposed to open up, because opening up gets in the way of maintaining that ‘hard shell,’” he said. “That’s part of what kept me trapped in the past, knowing that’s what my friends decided to do. I never felt that urge, so that’s good, at least.”

Still, he was haunted by what he’d seen. The recurring vivid images left him unable to sleep through the night or connect with others. He said he lost interest in the banality of day-to-day life.

After visiting his brother who lived in Philadelphia, he moved here in October 2017.

“I’d never lived in a city before so, since my job is remote and there wasn’t anything keeping me in western Massachusetts, I decided to take the leap,” said Dempsey, now an editor for the news website Patch.

A year later, a friend who worked in the dog grooming and care field and had noticed Dempsey’s struggles, told him about K9s for Warriors.

“He knew I loved dogs, and he’d seen what they can do,” said Dempsey, who was aware of the program and realized it might be for him. “There was a 14-month wait, so I lived life as normal until I got the call to go to Florida.”

'AN EPIDEMIC OF VETERAN SUICIDE'

There, he and Maverick would become one of the 551 “warrior-canine teams” formed since the non-profit was created in 2011.

“There’s an epidemic of veteran suicide in our country,” said Rory Diamond, the program’s CEO, estimating that at least 20 veterans who served after 9/11 take their lives daily. “Service dogs are a proven method of alleviating the debilitating symptoms of PTSD, like suicidal ideation.

“They not only get our veterans back on their feet, but they also help them regain a sense of normalcy in their lives.” 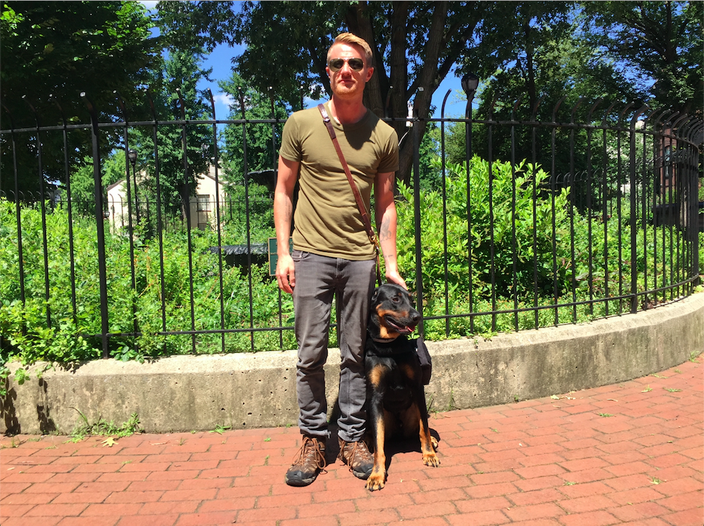 Geoff Dempsey, a 30-year-old U.S. Marine who lives near Fitler Square in Philadelphia, met his service dog Maverick through a national non-profit called K9s for Warriors in April 2019.

To hear Dempsey tell it, that’s exactly what Maverick has done in the two short months they’ve been together.

The match – which started when the pup jumped up and started licking his new master’s face – was built around the dog having energy, but not so much energy where he’d get restless living in a city without an expansive yard.

They flew back together with a layover in Charlotte and what’s happened since is everything they’d hoped.

“I don’t wake up in the middle of the night to a very particular intrusive image as much anymore,” Dempsey said. “If that happens, he jumps right on top of me. Knowing he’s completely focused on me is a big factor. He physically grounds me. It really works."

A recent trip to the Jersey Shore with his girlfriend left them convinced that Maverick is such a water dog that “he’d probably prefer to be a seal.”

Reflecting on what the past two months have brought, Dempsey is grateful.

“It’s amazing what a dog can do for a person," he said, sharing his hope that more people will donate to K9s for Warriors. "They say ‘man’s best friend,’ but he’s so much more than that to me. The unconditional love of a dog is irreplaceable."

Before the conversation wrapped up, he was asked about patriotism and the meaning of military service, through the lens of helping veterans acclimate to the home front.

“When people say ‘thank you for your service,’ it can often feel empty, even obligatory. Ask us ‘what’s life like now?’ or ‘how have things been since you’ve gotten back?’" he said. "The phrase is certainly never ill-willed and often genuine, but it immediately puts us in a box. Some vets identify strongly with their past service, while others try to move on a bit more.

“Maybe it makes people feel patriotic to ask that, but to me, being patriotic is paying attention to your neighbors, knowing who they are, or knowing that as a country, we can do better, making sure every American is fed and has a roof over their head.”

What’s clear is that once Maverick was under Dempsey’s roof, things have started getting substantially better, and that's due to those who made the donation to the non-profit group that aims to "give a new leash on life to rescue dogs and military heroes."