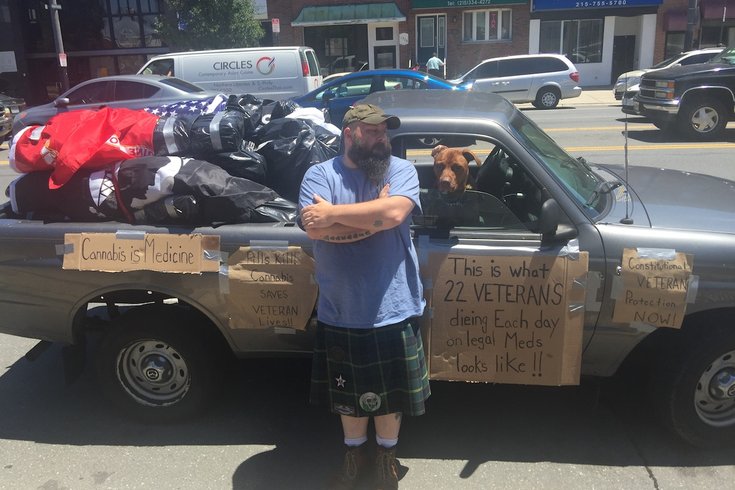 Chris Mueller served an 18-month U.S. Army tour in Iraq between 2006 and 2008. On Tuesday, he and his dog Wreckless drove around Philadelphia to highlight the issue of veterans' suicide and the need for Constitutional protections for returning soldiers.

More than a year ago, Chris Mueller started collecting empty bottles for a mission that he’d finally embark upon around 5 a.m. Tuesday.

He didn’t sleep too much Monday night. He was pretty anxious. So, in the wee hours, he loaded roughly 450 of those bottles into 22 “body bags” and placed them in the back of his Mazda B2300 pickup.

Around 7 a.m., he drove south on Route 611 – with pit-bull/Rottweiler mix Wreckless as his co-pilot – for a day of attention-grabbing protests driving along Broad and Market streets.

One of the 10 cardboard signs duct-taped to the side of his pickup explained his inspiration.

“This is what 22 veterans dying each day on legal meds looks like!!” it read.

He wanted to draw attention to his stance that cannabis is much better for returning veterans, particularly those grappling with PTSD, than prescription pills.

As importantly, he was rallying support for a push to afford veterans with the Constitutional protections afforded to Americans in regards to race, religion, sexual orientation and, among others, profession in the case of law-enforcement jobs.

Suffice it to say, the body-bag imagery drew much attention from those walking along the main Philadelphia thoroughfares as Mueller and Wreckless drove by at about 20 miles per hour from morning to evening rush hours.

On the Facebook Live stream that ran throughout the driving hours, Mueller labeled it a protest, calling for “Constitutional Veterans protections.”

PhillyVoice rode along with the duo for about an hour to get a better idea of what inspired Mueller into action.

If you recognize Mueller, it’s probably from a photo – taken by local veteran and cannabis activist Mike Whiter – of him laying naked in a bathtub covered with prescription bottles from Whiter’s “Operation Overmed” effort back in June 2015.

“Shock and awe,” he said in describing what he hoped his visceral display of the impact of veterans suicide would accomplish. “I’m not a big hugger, but even if I was, I couldn’t hug you into seeing how big of a problem this is, but body bags in the back of my truck could.”

When Mueller was young, his family lived in Philadelphia’s Mayfair neighborhood, but they headed for the 'burbs before long.

He wanted to enlist by the time he turned 15, but rules being what they are, he wasn’t permitted to do that. So, he waited until he was 17 and followed in many relatives’ footsteps of serving their nation. 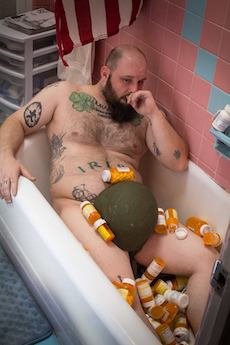 Chris Mueller posed for a photo to highlight the ills of prescription abuse among veterans for the 'Operation Overmed' effort.

What came next was disillusionment, PTSD and seeing friends take their lives either directly via pills, or at the end of a slippery slope that started with prescriptions leading to drinking or drugging themselves to death.

Mueller said that if veterans had the constitutional protections afforded those in law enforcement, treatment upon returning home would be better, and they’d have easier access to jobs, homes and benefits.

As it stands, returning soldiers who become police officers are treated in higher regard than those who don’t.

“We hunted terrorists. It was our job, and we were good at it,” said Mueller, who politically belongs to the U.S. Pirate Party and has an alter ego, the "Iron Kilt," who helps homeless veterans on the streets of Philadelphia. “Weapons of mass destruction, did we find any? No. Well, the one’s we did find had American fingerprints all over them. … What the f*** were we doing there that whole time?”

He doesn’t have a problem with police officers “who serve their city, but that’s not as big as soldiers who’ve served a nation.”

Thus, he thinks they should be afforded the same respect and benefits instead of being put into a situation where veterans find themselves homeless or choosing between spending their benefits on food for a month or shelter, and not both.

Not only that, but he shared the story of a fellow soldier serving life behind bars “for actions he took when he got home” while “police officers who do the same thing he did get a two-week paid vacation to go off and party.”

As the conversation turned back to the makeshift body bags in the back of his truck, a trio of construction workers near Broad Street and Washington Avenue shouted out their support for his message. 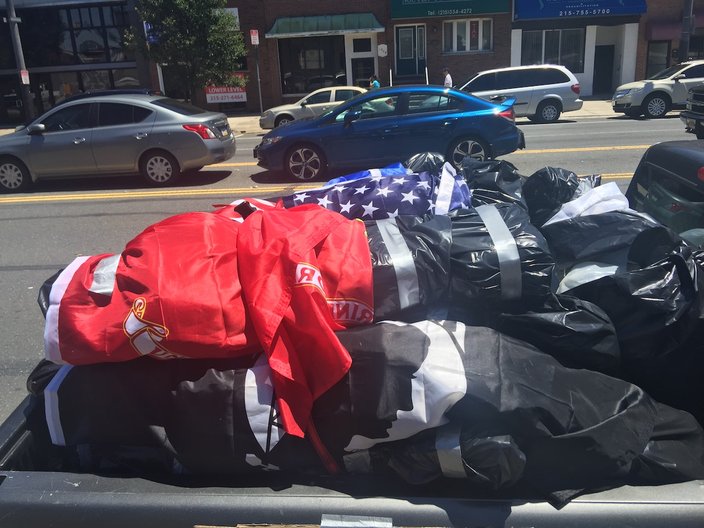 That was a common thread.

Mueller said he’d gotten nothing but positive reactions from passersby for the first five hours of his roving protest.

He also interacted with people watching his Facebook Live stream who sent messages of support and shared stories of having attempted to take their lives when they got back to the U.S.

He staunchly believes that cannabis, and supportive peers, can help returning veterans better cope with the mental anguish they carry. (“Getting together and smoking a fatty is a good way to stay in touch,” he joked.) Instead, doctors prescribe pills courtesy of a poorly funded and supported Veterans Administration.

He hoped Tuesday’s mission would convince the citizens who took an oath to protect to contact their elected officials to push for those Constitutional protections for veterans.

And with that, Mueller and Wreckless were off to do something they believed they should for the rest of the afternoon.