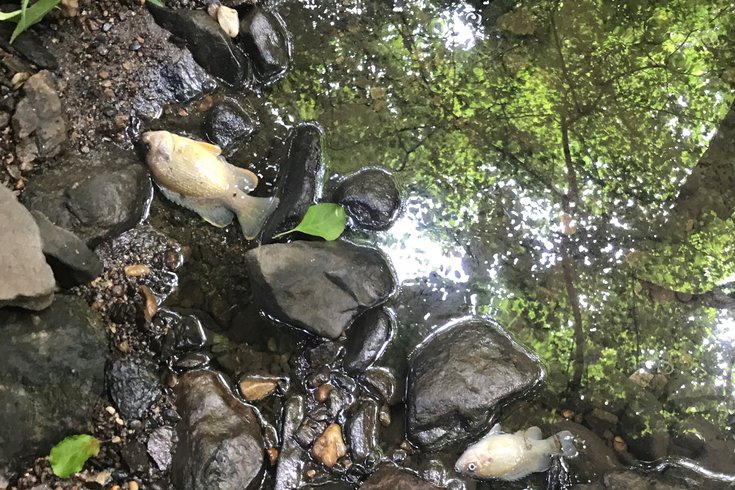 A gas spill in Brookhaven killed wildlife and caused an elementary school to cancel in-person learning for the rest of the academic year. Delaware County prosecutors have charged George Smith, a fuel driver for Lee Transport Systems, for causing the spill.

More than 4,000 gallons of gas spilled at a Gas N Go on Edgmont Avenue, killing wildlife and forcing nearby Coebourn Elementary School to close, according to Stollsteimer's office. George Smith, 36, faces 11 charges, including unauthorized processing of hazardous waste and causing catastrophe, in connection to the spill, court documents show.

Through records from Smith's employer, Lee Transport Systems, investigators determined that he filled his fuel truck with 8,500 gallons of gasoline for delivery on the day of the spill, the D.A.'s office said. Those records also show that the Brookhaven gas station was the fourth stop on Smith's delivery route, but he chose to make it his first stop.

"Due to an earlier delivery at the Gas N Go on the day of the incident, it was clear from records that the quantity of gasoline carried by (Smith) would not fit in the underground tanks at the Brookhaven station," the D.A.'s office said in a news release.

"Investigators learned that safety features on (Smith's) fuel truck make it impossible for drivers to refill their truck if gas remains in the truck fuel compartments. Therefore, (Smith) would have had to make a partial delivery at his next stop before returning to the fuel depot, which would have lengthened his route."

When a meter system that monitors Gas N Go's underground fuel tanks alerted Smith of an overfill warning, he allegedly deliberately redirected the hose to the guardrail of the property and was caught on a surveillance camera doing so. Investigators said dead vegetation marked the path of fuel flowing down an embankment next to the gas station and into a small wooded area. 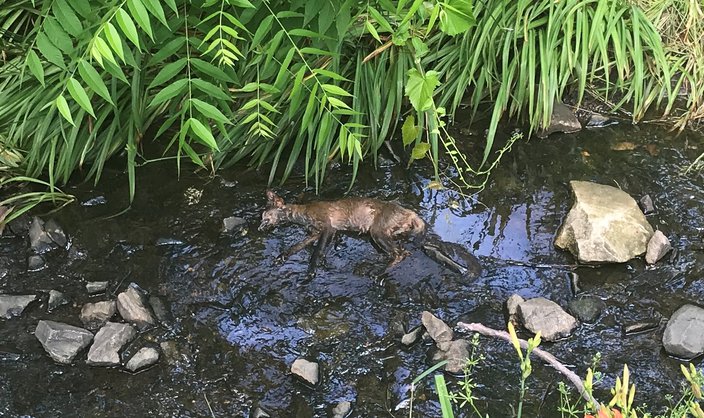 A fox was among the animals killed by a large gas spill in Brookhaven, Pennsylvania, on June 11, 2021. A fuel delivery driver from Vineland has been charged with causing the spill, according to the Delaware County District Attorney's Office.

First responders found the spill the next day after residents reported smelling gas in the area, according to the Delaware County Daily Times. In an email Tuesday announcing charges against Smith, prosecutors provided photos of fish and a fox that were found dead in the wooded area as a result of the spill.

"To date, over 100 large trucks of contaminated soil have been excavated and removed from the site," the D.A.'s office said. "Additional efforts to remediate, including testing and treating the ground water, could take years." 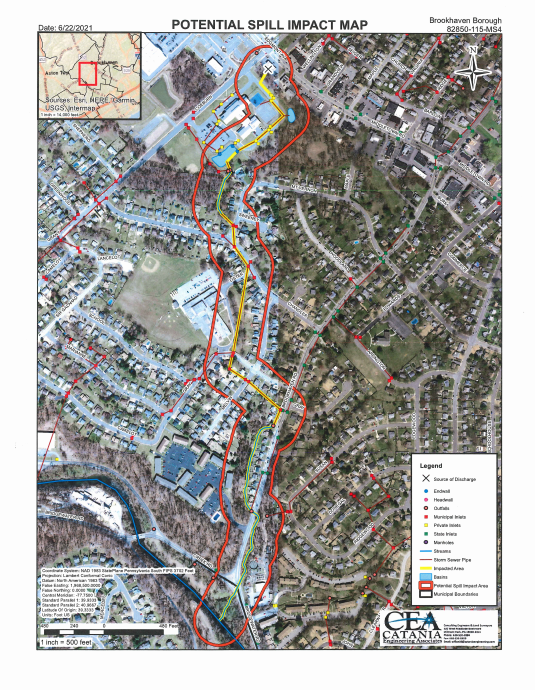 A map provided by the Delaware County District Attorney’s Office shows the areas potentially impacted by a gas spill that occurred June 11, 2021, in Brookhaven, Pennsylvania. A fuel delivery driver from Vineland has been charged with causing the spill.

The spill and subsequent clean-up efforts, which reportedly stretched into early July, also caused Coebourn Elementary School to close to in-person learning for the remainder of the academic year.

"It is not recommended that we have an entire school of students and staff occupying the building for extended periods of time," Principal Teresa Ford wrote to parents in a June 15 post on the school's Facebook page. "Although the current interior air quality readings in the school are very good, I am advised that this could change quickly and I don't wish to have students and staff potentially experience fumes or difficult smells that will be expected from the clean up operation."

Smith was arraigned Tuesday and has a preliminary hearing scheduled for Aug. 12, court documents show.

"(Smith) was entrusted with a hazardous product – gasoline – and he owed a duty of care to all of us," said Stollsteimer, who lambasted him for allegedly choosing "self-interest over the safety of the Brookhaven community."

The general manager of Lee Transport Systems, Fred Terpolilli, told the Inquirer that Smith has not worked since the spill and that the company is "saddened by the course of action ... that caused this horrific spill that impacted the community."

"We are consulting with a labor lawyer to weigh our options," Terpolilli told the newspaper in an email, adding that Smith's future with the company is "bleak."

"There is overwhelming evidence that this was not a routine delivery procedure," Terpolilli wrote. "As a former transport driver, I can say everything about the delivery at this site by George Smith was wrong."