Tale of the tape: A statistical look at DeMarco Murray vs LeSean McCoy 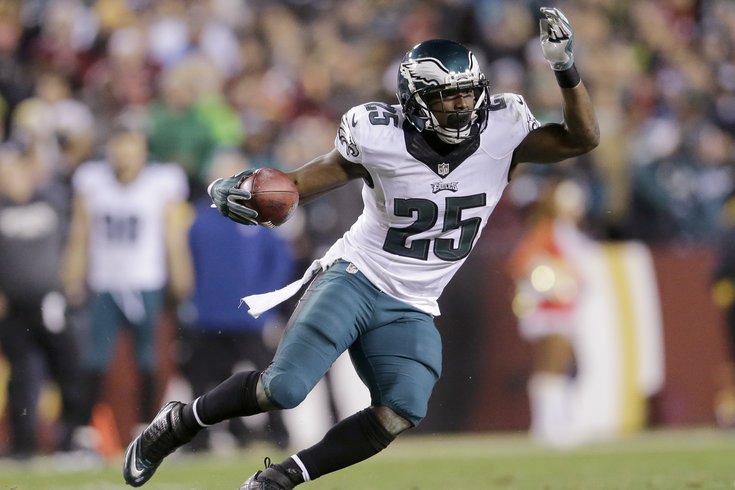 The Eagles went from one great running back to another this offseason. Out is the shifty, dynamic LeSean McCoy; in is powerful sledgehammer DeMarco Murray. Over the course of their careers, both McCoy and Murray ran behind offensive lines that were at times stellar, at other times not so much. First, their basic stats:

Here, we'll take a deeper look at McCoy and Murray from a statistical standpoint, and determine which back has the edge in 10 different categories: Durability, Age/wear/tear, cost, receiving capabilities, short yardage, explosive plays as a runner, explosive plays as a receiver, yards after contact, fumbles, and #culture.

LeSean McCoy has been in the league two years longer, but Murray is actually seven months older. Here are the projected starters for every team in the NFL, ranked by age:

McCoy only played two years at Pitt, while Murray played four at Oklahoma. However, even if you add Murray and McCoy's college workloads to their pro workloads, McCoy still has significantly more touches:

Murray famously had an enormous workload in 2014, when he had 449 regular season touches, and 497 if you include the playoffs. However, it's not as if McCoy hasn't had a huge workload himself. Over the last two seasons, McCoy has 706 total touches. McCoy led the NFL in carries in 2013, and was second in 2014, whereas Murray's 2014 season was the first time he ever had more than 217 carries.

Cap numbers, by year, via overthecap.com:

Their cap hits are roughly the same. However, I think the difference here is that the Eagles are in a better position than the Bills in years 3-5 if they want to get out early. The key numbers in the charts below are the two rows all the way to the right, which show the cap hits/savings if cut.

McCoy would have counted for roughly $12 million against the cap in 2015 if he were still on the team, and the Eagles hadn't worked out some sort of contract extension with him.

The Eagles have always made it a priority to get the ball in the hands of their running backs in the passing game, which is going to skew McCoy's numbers here to some degree. Nevertheless, McCoy's career receiving numbers are far better than Murray's.

However, McCoy's numbers were way down in 2014, while Murray's were up:

Murray will be in an offense that utilizes their backs in the passing game more than he's used to in Dallas, so it will be interesting to see how he adapts, but for now we'll call McCoy's down 2014 an anomaly until we see him string a couple down seasons together in that regard.

We'll define "short yardage" situations here as all runs when there were 1-3 yards to go for a first down, or 1st and goal from the 3-yard line or closer. The numbers in those situations:

Murray's 71.8 percent career first down conversion rate in 1-3 yards-to-go situations is outstanding. I always felt that McCoy was underrated as a short-yardage runner, and the difference between McCoy and Murray isn't great, but McCoy is simply not on Murray's level on short yardage plays.

Murray has also been a more effective runner in the red zone.

When we think of LeSean McCoy and DeMarco Murray, most would perceive McCoy to be the more explosive player. That's not necessarily true.

However, in the passing game, McCoy has far more explosive plays. For his career, McCoy has 22 receptions of 20+ yards, 5 of which went for 40+ yards. DeMarco Murray has 6 receptions of 20+, and has no receptions of 40+ yards. The Eagles were of course a far better screen team both in the Andy Reid and Chip Kelly years, which helps McCoy, but that is still a rather big difference in numbers.

Edge: Murray as a rusher, McCoy as a receiver

In 2014, Murray had 998 yards after contact, which led the NFL, as it should considering he carried the ball far more than any other back. This is an area where you would expect Murray to be better than McCoy, and he is. Here are Murray's and McCoy's average yards after contact, sorted from their best years to their worst. (Number via ProFootballFocus)

Last year, many Eagles observers debated whether or not LeSean McCoy looked the same as he used to. While the Eagles certainly had their difficulties staying healthy along their offensive line, McCoy didn't help matters much by not breaking tackles or making guys miss like he did in previous seasons. There is some evidence here that he is in decline.

In 2014, DeMarco Murray fumbled five times during the regular season on 449 total touches. He lost all five. He also had a devastating fumble against the Packers in the playoffs in which he had nothing but open space in front of him, but Julius Peppers was able to lunge at him and pop it out. Clearly, Murray fumbled more than you would like last year, although obviously, he touched the football far more than any player in the league.

LeSean McCoy wasn't without his issues fumbling the football last year. He fumbled four times, losing three. McCoy often carries the ball way away from his body carelessly (see picture at the top of this post), and in the past, somehow it did not bite him as much as it probably should have. Last year it caught up to him a bit.

I don't have any numbers to back this one up, but I think we can all agree at this point that McCoy is a bit of a jackass. #Analysis.