What they're saying: All-22 highlights of Fletcher Cox's 2014 season 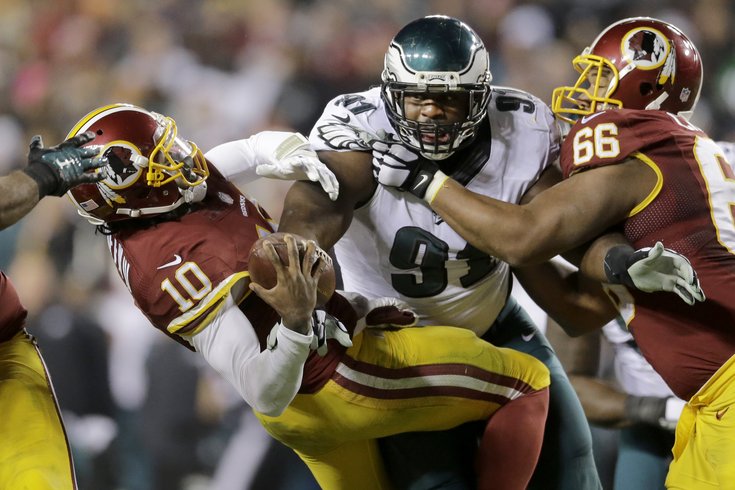 Fletcher Cox is a beast.

Fletcher Cox's 2014 season, statistically, isn't exactly eye-popping on paper -- 61 tackles, 4 sacks, 1 forced fumble, and 3 fumble recoveries. As a result, Cox's 2014 efforts did not impress the dopes who vote for the Pro Bowl, and Cox was snubbed. (he did garner second team All-Pro honors). Eagles fans, however, are well aware of what Cox is -- an emerging elite defensive lineman.

Below are his 2014 highlights, in an All-22 view, compiled by Larry Mitros on insidetheiggles.net. (@L_mitros85 on Twitter). You can really see here how Cox often dominated opposing offensive linemen with his rare combination of strength and quickness.

One player on this list may be somewhat divisive, so we'll start with the other two. Ryan Mathews and Giovani Bernard are players who could be feature backs in the NFL and have ended up in backup situations.

Mathews has had some impressive seasons since being made a first-round pick in 2010, but he also missed 10 games in 2014, and another 10 combined over the three seasons prior. As a backup to DeMarco Murray, Mathews should get his carries and flourish against Murray-battered defenses.

We covered DeMarco Murray and Ryan Matthews' blend of size and speed last week, and how they may wear down opposing defenses late in games this season.

To note, while Darren Sproles isn't your typical running back (he's more of a versatile offensive weapon), he too would rate very highly on the "backup RB" list. The Eagles are loaded at running back.

A total of seven wide receivers were included on the list:

Matthews isn't just underrated nationally. I think some of the locals underrate him as well.

Odell Beckham Jr. is clearly an outstanding young talent, with flash. Mike Evans and Kelvin Benjamin have freakish size. Brandin Cooks has great speed. Those players all have traits that distinguish them from ordinary receivers. The thing that sets Matthews apart from other receivers is stamina, which is a very important but under-appreciated trait for a wide receiver, especially in an up-tempo offense. Otherwise, Matthews has good speed, good hands, good size, and he's a good blocker. While there isn't that one obvious thing where he stands out, there isn't much that he doesn't do well. I think Matthews is going to have a long, outstanding career, while possibly never getting the recognition he deserves.

Why Rowe Is Starting Out At Corner - Tim McManus, Birds 24/7

There have been some positive signs here in the early going. Undlin pointed to "an unbelievable play" Rowe made on Wednesday that speaks to his level of growth in a short period of time. The new defensive backs coach didn't want to offer up too many specifics, but explained that based off the offensive formation and split of the wideout, Rowe properly diagnosed the situation and made a call that put the defense in position to have the upper hand.

"Actually, it was really impressive," he said.

I do understand the temptation to use Rowe at safety. Obviously, safety remains a huge hole in the Eagles' defense, as it has since Brian Dawkins left for Denver more than a half decade ago. Not to mention, the state of safety play around the NFL in general is abysmal, which makes safeties harder to find. However, starting Rowe out at corner is the right move. Corner is still the more important position, it's arguably just as big a need for the Eagles at the present time, and if Rowe does not pan out at corner, you could then move him to safety. It's a lot harder to move a guy from safety to corner than the other way around.

The Eagles like Boyko. He played LG and LT at UNLV. At 6-6, 305, he has the kind of frame they like. He was a QB in high school. Sounds like a Chip Kelly kind of OL. The downside…doesn’t have the footwork to be a LT in the NFL. Also lacks ideal arm, hand size.

Right now Boyko is the LT on the #3 OL. His best spot in the NFL is likely OG. I’m sure the Eagles will get him some work there this summer. There is nothing wrong with playing him at LT for now to see how he handles the spot.

Don’t get too excited about Boyko. There are some reasons to be optimistic about his chances to push for a roster spot, but he needs time to develop.

The Eagles evidently paid Boyko a healthy bonus to sign him as a UDFA. His measureables are, um, not good.

Still, he's an interesting player to keep an eye on in camp, as the Eagles clearly made him a UDFA priority.

"I just feel like he went out and graded the way he should grade," Bicknell said. "There were a couple of plays he could have made. He knows that. We know that . . . I grade it the way I grade it."

Memo to the uneducated common man: When it comes to wide receivers... 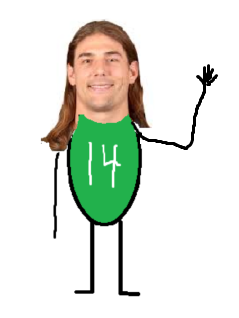