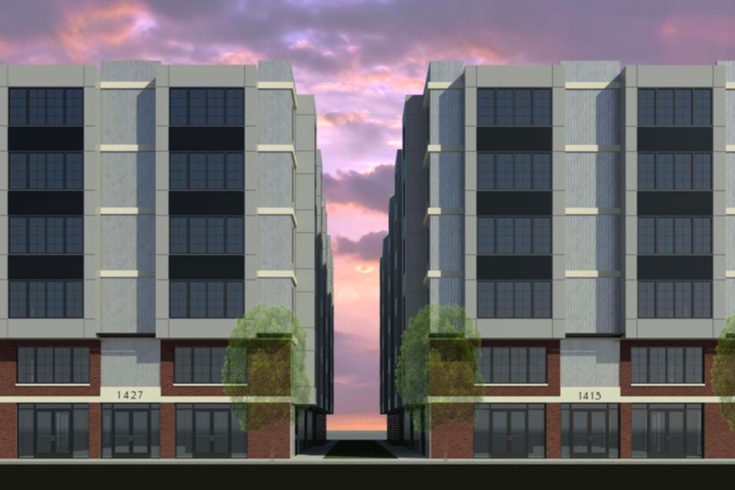 Rendering of proposed apartments at 1413-27 Germantown Ave. in Olde Kensington.

A proposal to be evaluated Tuesday by Philadelphia's Civic Design Review board calls for 120 residential units spread across two buildings on Germantown Avenue in an area of South Kensington that is increasingly bridging Northern Liberties and Fishtown. 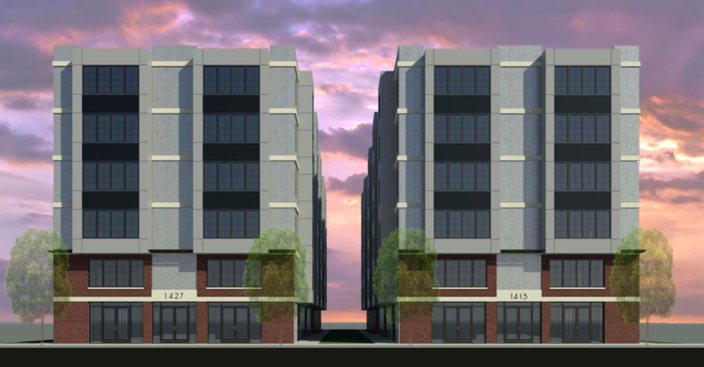 Rendering of proposed apartments at 1413-27 Germantown Ave. in Olde Kensington.

The first parcel features 50 residential units on floors two through six, with 15 parking spaces in the rear of the building and 20 bicycle spaces. An additional 70 residential units in the second parcel, also on floors two through six, would be joined by 21 ground-floor parking spaces and 20 bicycle spaces.

Considered Olde Kensington or South Kensington, the neighborhood has become a target for developers in recent years, sometimes facing opposition from local neighborhood groups. Blackstone Development's mixed-use Liberty Square project, a Schmidt's Commons-like proposal at 1203 Germantown Ave., has been a slow-build prospect on what the developer calls the northern border of Northern Liberties.

When signs of life at the Liberty Square site resurfaced last fall, Naked Philly wondered whether progress there could revive talk of the more controversial Soko Lofts proposal, a residential complex that would add 320 apartments and retail at 1300 N. Second St. First led by the Canus Corp., Soko Lofts faced resistance when the Klein Co., its second attempted developer, proposed converting a public throughway into a gated private passage.

Soko Lofts received CDR approval for zoning changes in the summer of 2015, but plans apparently have not advanced since then.

Elsewhere, Frankel Management Co. and Streamline Solutions are getting ready to lease apartments in the 45-unit residential development at the corner of Fifth and Thompson streets. The same partnership continues to move forward on plans for a 46-unit, mixed-use "Techadelphia" hub at 1525 American St.

Olde Kensington, still a relatively quiet neighborhood, is clearly undergoing a transformation that mirrors more of what's been done in Northern Liberties and Fishtown over the past two decades — if not in terms of nightlife, then in the approach to residential redevelopment. Progress on plans for the millennial-focused SoNo campus at Fifth Street and Spring Garden, formerly the site of Destination Maternity, only signal further that the area is preparing for another influx of residents in the coming years.