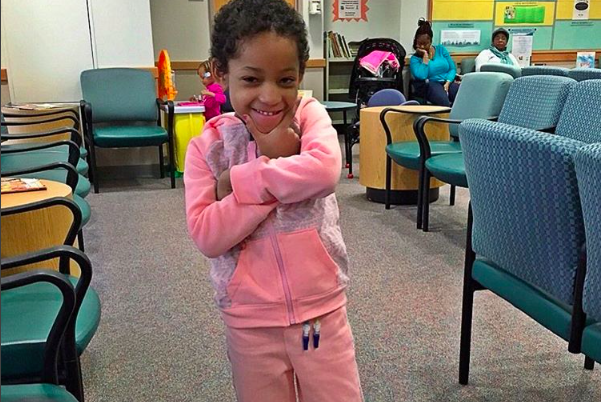 Five-year-old Leah Still poses for taking tests at CHOP to confirm her cancer is in remission.

Leah Still's brave battle against cancer has been one of the more uplifting stories of the past year, garnering national attention as the daughter of former NFL player Devon Still persevered through stem-cell therapy and radiation treatment at Children's Hospital of Philadelphia.

During the Thanksgiving holiday, Devon, a Camden native and Penn State alumnus, took to Instagram to thank Leah's supporters for their encouragement through many challenging months.

Five-year-old Leah was given 50-50 odds to survive after she was diagnosed in June 2014 with stage IV neuroblastoma, a rare form of pediatric cancer. Despite some complications earlier this year, Leah concluded her radiation treatment at CHOP in July, ceremoniously ringing the bell to signal her victory over the disease.

At this year's ESPYs, Leah was honored with the Jimmy V. Perseverance Award in recognition of her strength and courage in the face of adversity.

In August, the Still family launched the Still Strong Foundation to support childhood cancer research and assist families in need when a loved one is undergoing treatment.