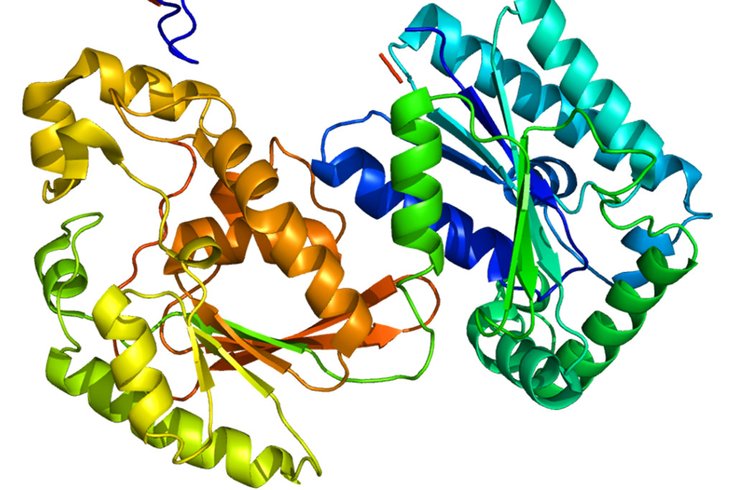 Structure of the PFKFB3 protein.

A third common form of adult-onset diabetes may be a product of genetic risk factors associated with both prevalent types of the condition, according to new research out of The Children's Hospital of Philadelphia.

Latent autoimmune diabetes in adults (LADA), informally called "type 1.5 diabetes," usually surfaces after the age of 30 and shares characteristics of both type 1 and type 2 diabetes. Those who have the condition may not need insulin injections for months or years after it develops, a delay that sometimes complicates diagnosis and treatments.

Researchers at CHOP conducted the first-ever genome-wide association study of LADA to better determine whether the condition is a subset of type 1 diabetes, as some believe, or driven by a combination of types 1 and 2.

"This study lends support to the idea that LADA is a hybrid of type 1 and type 2 diabetes, but doesn't settle the question of the best way to precisely define the disorder," said co-first author Diana L. Cousminer, a geneticist at CHOP. "Correctly characterizing LADA is important, because it may determine whether a patient receives the most appropriate treatment."

Working with collaborators from nine different countries, the CHOP study built on previous research that identified gene variants linked to LADA that may have roles in the development of type 1 and type 2 diabetes.

One particular gene the study focused on was PFKFB3, which regulates insulin signaling and glycolysis. The gene encodes a protein that impacts both metabolism and inflammation in autoimmune disease.

"This protein therefore appears to sit at the intersection of both major types of diabetes," said Cousminer.

The study aims to help address the 5 to 10 percent of adult patients misdiagnosed with type 2 diabetes when in fact they have LADA, offering hope for better clinical management of their conditions.

"The interaction of genes in LADA may modify the disease process by delaying the onset of more severe autoimmune diabetes into adulthood," said Cousminer. "If further research uncovers those mechanisms, we may be able to develop therapeutic methods to delay more severe disease."

Support for the study, published in the journal "Diabetes Care," came through a grant from the National Institutes of Health, the German Research Council and the state of Baden-Württemberg.