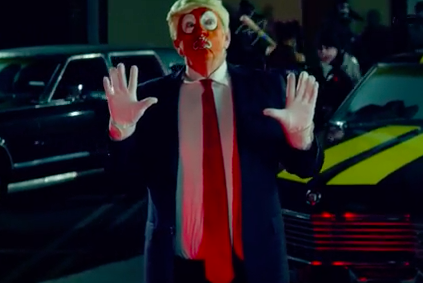 In a sign of the irredeemably strange times we're living in, last week we had a sitting president of the United States leap into a Twitter beef with Snoop Dogg.

Can you imagine what the outcry would be if @SnoopDogg, failing career and all, had aimed and fired the gun at President Obama? Jail time!

President Trump's ire was directed at a music video for Snoop Dogg's "Lavender" remix, featuring BadBadNotGood and Kaytranada, which includes a near-mock execution of a clown named Ronald Klump.

Instead of a bullet, the gun, wielded by Snoop Dogg, releases a flag that reads "bang," as often seen in "Loony Tunes" skits. (WARNING: Video contains extremely explicit lyrics, themes and graphic content).

The director of the music video is none other than formerly Philly-based YouTube star Jesse Wellens, whose PrankvsPrank channel rose to fame in 2007 after he and ex-girlfriend Jeana Smith began uploading pranks they played on each other. Their other channel, BFvsGF, was discontinued last spring when the couple announced they were splitting up, and Wellens subsequently moved to New York City.

Reaction to "Lavender" has been all over the place.

FOX News host Kimberly Guilfoyle suggested the Secret Service should "kill" Snoop Dogg and his nephew Bow Wow, who took his own shot at Trump and dragged the president's wife into the debate in the process.

At the other end of the spectrum, fellow hip-hop artists Rick Ross, Jidenna and Desiigner all backed Snoop Dogg, calling the video a "bold" and "audacious" exercise of free speech.

In an interview with Billboard, Wellens explained that the origin of the video came during a discussion he had with Snoop Dogg around the time when Philando Castille was fatally shot by a Minnesota police officer in a video published on Facebook Live.

"I just had been seeing this go on in the world politically, and I actually was a cop for six years in the military, so I can kind of see it from the cop’s point of view too," explains Wellens. "When I originally wrote the idea of the video, the video of [Philando Castile] getting shot came out online and it was causing riots. We just kind of wanted to bring the clowns out, because it’s clownery — it’s ridiculous what’s happening."

Snoop Dogg also defended himself and praised Wellens' work as a director.

The whole world is clownin’ around, and [Jesse’s] concept is so right on point with the art direction and the reality, because if you really look at some of these mother-------, they are clowns. The ban that this mother------ tried to put up; him winning the presidency; police being able to kill mother------- and get away with it..."

For what it's worth, it now appears the tables may have turned on Wellens, at least in a lighthearted way. On Sunday afternoon, a Twitter user pointed out to the director that the website for www.jessewellens.com doesn't land at a place you might expect.

And here's Wellens' bottom line on the controversy.

I mean basically click baited the president...and he clicked🤡 Art is made to start a discussion. I think the world had a needed talk.