Dislodge yourselves from Doug Pederson's butt for that 4th-and-8 call, people

Against the New York Giants on Sunday, near the end of the first half with 2:36 remaining on the clock, the Philadelphia Eagles faced a 4th and 8 from the Giants' 43-yard line, holding a 7-0 lead.

They should punt there, obviously, right? I mean, growing up watching football, that's what just about every other team does in that situation, which makes it right.

Doug Pederson went for it. On the play itself, Carson Wentz had two receivers open, one of whom (Nelson Agholor) would have gotten a first down with an accurate throw, while the other (LeGarrette Blount) would've needed to evade a tackler to reach the sticks. Both were good options, as shown here by Brian Baldinger on Twitter:

Instead, Wentz was sacked for a loss of 6, and the Eagles turned the ball over on downs. The common reaction:

Stop. It was a perfectly cromulent call.

Pederson explained in his post-game press conference that some nerd in the Eagles' booth told him that the math worked in the Eagles' favor to go for it in that situation.

"It was something I discussed with the guy that's helping me upstairs with some of the analytics, and where we were on the field, what we were doing offensively at the time, defense was playing extremely well, had an opportunity to really keep ourselves on the field at that time," he explained. "That's why I elected to go for it at that point. And then obviously we didn't get it, and the defense held."

The 'nerd' in the booth is analyst Ryan Paganetti, who is in constant communication with Pederson, both during the week and on game day. Paganetti is probably not really your traditional math nerd. He played running back at Dartmouth, and in addition to his Doug whispering duties, he doubles as an assistant linebacker coach.

"We talk every day during the week leading up to the game," Pederson said. "And then during the game, the communication between he and I is that we even talk on 2nd down: ‘Be prepared for, maybe expect this,' those questions, those scenarios are beginning to talk, those conversations are talking actually on 2nd down. When we get into those situations, those areas of the field where it might be a go-for-it situation or it might be a, ‘Hey, let's get the points here, let's do this,' whatever it might be, we have those conversations early actually in the series."

From the 'math-nerd' perspective, a common reference for fourth-down conversions is the New York Times '4th Down Bot,' which shows that teams go for it far less than they should. The following chart shows what the '4th Down Bot' recommends, and what NFL teams most commonly do. As you can see, there's a lot more yellow on the left (what the 4th Down Bot) recommends) than on the right (what teams actually do).

In the 4th and 8 scenario that Pederson went for, the aggressive '4th Down Bot' actually recommends a punt, but it's very close, perhaps a near 50-50 decision. The red line below shows '4th and 8 from the opponent's 43.' As you can see, it's just on the outskirts of the 'punt' section, just on the edge of the 'go for it' section: 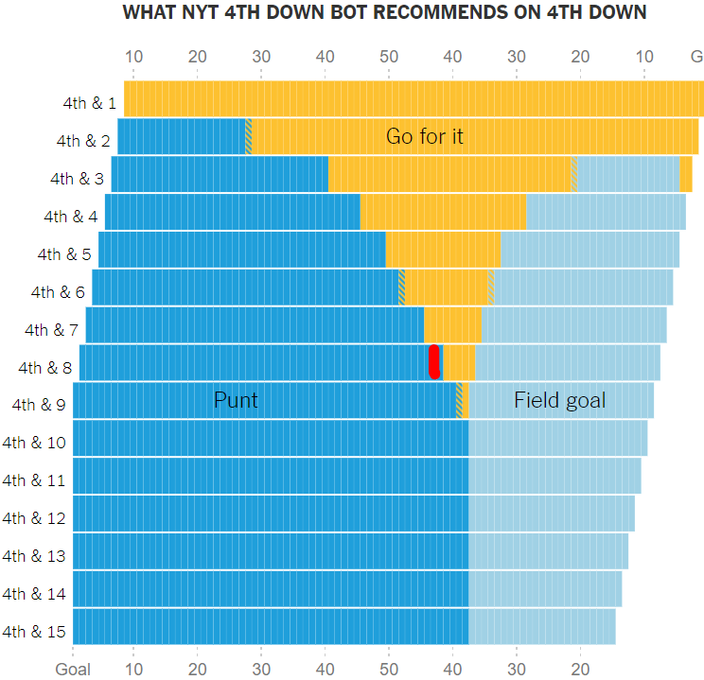 During Pederson's press conference, a reporter asked the following question, citing Pro-Football-Reference.com as his source:

"I looked up 4th and 8s historically, it seems to be about an 18 percent success rate on that specifically. Are you good with that number? Do you feel that's good?"

Pederson responded, "My number that we went off of, and I don't know where you got your information from, was 33 percent."

Pederson is correct. After doing my own search dating back as far as Pro-Football-Reference would allow (1994-2017), 4th and 8 situations have resulted in a conversion rate of 32.8 percent, not 18 percent. Using just the last 10 years, when passing efficiency has improved, that percentage jumps to 34.5 percent.

When put on the spot, Pederson was well aware of the historical success of such a situation, as opposed to some drunk guy blowing his paycheck at the blackjack table.

If the Eagles had converted, they would have been inside the Giants' 35-yard line, where it would have been a strong likelihood that they came away with points. If they didn't convert, the most likely outcome would have been an incomplete pass, meaning the Giants would have started their ensuing drive from their own 43. As it turned out, Wentz was sacked, the Giants started at their own 49, and their drive resulted in a turnover on downs after a huge goal-line stand by the Eagles.

After doing some research, a punt from the 43-yard line, on average, would leave the opponent starting around the 11-13 yard line, resulting in a net punt of just 30-32 yards. (The Eagles' results on that are likely somewhat better than the average, as Donnie Jones is very good at directional and short-field punting).

Given all the pertinent information, that's when Pederson's gut springs into action. On the Eagles' prior possession, they marched 90 yards on 18 plays over 9 minutes and 34 seconds for touchdown. On the next drive, the one that ended with the sack on 4th and 8, the Eagles had already run 10 plays, beginning at their own 4-yard line. The offense was clicking, and the Eagles were moving the ball with success.

In that moment, Pederson had to decide whether a roughly 33 percent chance of converting that first down (and therefore likely coming away with points) was worth the risk of giving up roughly 31 yards of field position. Obviously, he did, and while it did not pay off, it was a reasonable gamble.

A member of the Eagles' coaching staff communicated with PhillyVoice that the Eagles wouldn't simply always go for it on 4th and 8 from the 43 in any scenario. How well the Eagles' offense and defense are playing, whether or not a key player along the offensive line is hurt or hobbled, Pederson's confidence in a play call, and any number of other factors would be considered. For example, if the Eagles were facing the Denver Broncos, with their stellar group of cornerbacks and pass rushers, the Eagles would likely punt.

Pederson noted during his press conference that if he had not gone for two other fourth down conversions, the Eagles would not have scored 14 of their points on Sunday.

"The other two fourth downs that no one is talking about are the two fourth and inches that led to touchdowns," he said. "67 percent on fourth down in a game is pretty good."

He's right. Fans and media tend to criticize the gambles that don't work, while taking the ones that do for granted. It's commendable that Pederson is willing to take on the unfavorably skewed praise-criticism ratio to do what he and the team think is the best decision to win the game.

And you know what else?

Beyond the math, Pederson's willingness to go for it on fourth down is, you know, fun. I mean... Right? I would imagine that if you don't at least get a little hyped up for a team going for it on 4th and 8, you're not a fan of Las Vegas, ordering an occasional steak wrapped in bacon, or having sex in the back seat of your car after-hours in a dark corner of the parking lot at Home Depot.

To each their own, I guess.