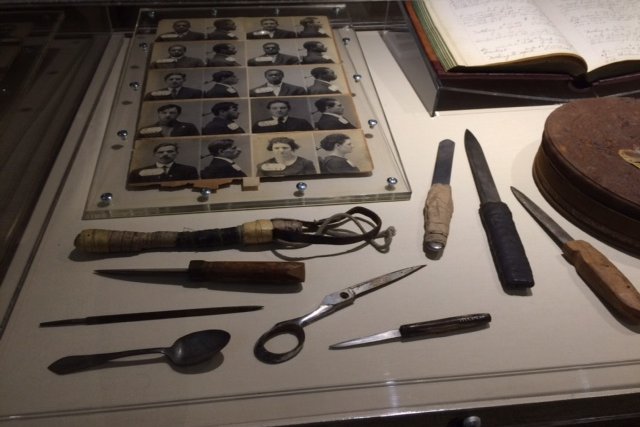 Inmates filled their leisure time with sports, music, crafts -- and fashioning shanks, homemade sharp weapons at Eastern State Penitentiary in the Fairmount section of Philadelphia. There's a pop-up exhibit until March 13 that is included in the regular admission to the historic site.

Doing time in Eastern State Penitentiary in the Fairmount section of the city meant having lots of time to fill.

In fact, the philosophy of doing penance was an integral part of the attempt to reform prisoners, initially housed alone for 23 hours a day when the prison first opened in 1829.

That’s a lot of time to fill, even when solo confinement went away in 1913.

And not all that time was devoted to planning escapes via tunnels or welcoming marque prisoners such as bank robber Willie Sutton or gangster Al Capone.

But of course that’s what captures much of the attention of typical visitors, said guide Lauren Bennett, 26.

In fact, most prisoners' time was spent in every day ways, Bennett points out as she explains Eastern State’s limited run pop-up exhibit on sports and leisure.

There were lots of sports, making music, carving soap or wood, crocheting, painting, chronicling life behind the walls in a magazine, even writing poetry,

Oh, and fashioning homemade shanks and other weapons, too.

Think of the pop-up sports and leisure display, drawn from the archives of Eastern State , seldom on display because temperature and humidity cannot be controlled in most the facility. It offers a microscopic view of life behind bars.

While the prison itself is imposing, the pop-up installation is instead intimate, taking up just five display cases in a smallish, climate-controlled room.

Visitor Rohaan Malhotra, 27, knew a little bit about inmate leisure activities in old-time prisons through the film “The Shawshank Redmption.” He had seen the Eastern State before, so he was looking forward to the special display as he toured near the old baseball field with his wife and sister-in-law on Saturday afternoon.

Many of the items he saw in the pop-up are found objects, recovered after the prison was shuttered in the early 1970s, but before its reopening as a historical site.

There’s an inlaid chessboard, with elaborate pieces, a tiny cutlery set made from soup bones, pin cushions, carvings, painted landscapes and portraits, as well as carvings from wood and soap.

World heavyweight boxing champ Max Baer and Connie Mack, skipper of the Philadelphia Athletics, who donated used equipment to the prison, are pictured.

Bennett said it was a rite of passage for neighborhood Philly kids to toss a homerun back over the prison wall at the far-end of the irregular baseball diamond deep inside the prison.

Visitation to the prison was at first not closely controlled and visitors with permits were taken straight to inmate cells.

She said that explains how much of the contraband, fashioned into crafts – or weapons – made its way into the jail.

As well as sports, music filled lots of time, including performances by the Philadelphia orchestra.

The radio station KYW – clearly pictured in an old photograph – broadcast from the prison each Christmas.

A 1929 film of a football game and a boxing contest, captured in archival footage, plays on an endless loop in the pop-up room.

Meanwhile,  the tune “How Strange,” written by two inmates and popularized in the late 1950s by a doo-wop group, plays on a loop.

One piece of advice: If you want to see the sports and leisure display, hurry. The pop-up, which is covered by the regular price of admission, closes March 13.