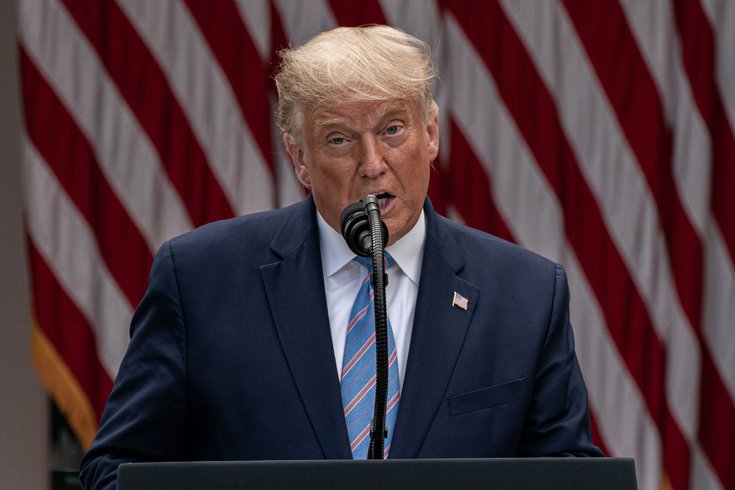 A defamation lawsuit filed against former President Donald Trump claims he and other close GOP supporters destroyed the reputation of James Savage, the head of the Delaware County Voting Machine Office, by making repeated false allegations of voter fraud in the county's 2020 election.

Former President Donald Trump, Rudy Guiliani and several other close GOP allies are being sued by the head of the Delaware County Voting Machine Office, who says the false claims of voter fraud during the 2020 election have resulted in him facing death threats, health problems and other hardships.

As chief custodian of the voting machine office in Chester, Savage's role requires that he manage the storage, security, testing, programming and delivery of all of Delaware County's voting equipment. He does not serve any direct function in the tabulation of votes during elections.

According to the lawsuit, Trump and his supporters made indirect allegations that the "voting machine warehouse supervisor" in Delaware County used a USB "v-card" device to fraudulently upload 50,000 votes for Joe Biden, who won Delaware County by nearly 88,000 votes and Pennsylvania by more than 80,000 votes.

In addition to Trump and Guiliani, who served as a personal lawyer to the former president, the defendants named in the lawsuit include attorney Jenna Ellis; former Kansas Attorney General Phill Kline; two GOP poll watchers in Delaware County, Greg Stenstrom and Leah Hoopes; and Donald J. Trump for President, Inc.

On multiple occasions outlined in the lawsuit, the defendants made untrue statements at hearings, in court documents and on television claiming ghost votes for Biden were illegally uploaded to voting machines in Delaware County.

Savage was not usually mentioned by name, but the lawsuit argues that the defendants' persistent lies about the alleged fraud in Delaware County could only have been in reference to Savage, by virtue of his exclusive job title.

The Trump campaign's fraud allegations in Delaware County were part of a much larger pattern of similar claims made elsewhere in Pennsylvania and across the country. The Trump campaign filed more than 50 lawsuits alleging various forms of voter fraud, all of which were disproven or rejected by state and federal judges.

The statements the defendants made about fraud in Delaware County occurred at various points from late November through early December of last year, including remarks Stenstrom made on FOX News' "Hannity" program just over a month before the Jan. 6 insurrection on the U.S. Capitol in Washington, D.C, according to Savage's lawsuit.

In one of the lawsuits the Trump campaign filed, seeking to overturn the results of the election, Stenstrom, of Glen Mills, claimed to have personally witnessed Savage uploading fraudulent votes on multiple occasions during the tabulation process, according to the Delaware County Daily Times.

The defendants frequently called the election in Delaware County a "sham" and a "disgrace," and during a hearing in Gettysburg on Nov. 25, in front of Pennsylvania Senate Republicans, Hoopes referred to Savage as a "Bernie Sanders delegate" who held sole responsibility for the county's voting machines, according to court documents.

The lawsuit claims Savage lacks the knowledge and experience to meddle with vote tabulations and would not know how to go about altering vote totals, whether for fraudulent or legitimate purposes to rectify an error. The lawsuit also claims the defendants were fully aware that Savage's job responsibilities do not include any vote tabulation.

Savage said he has suffered two heart attacks since the 2020 election and that he and his family members have received death threats. On one occasion, less than a week before the Jan. 6 insurrection, Savage was accosted at work by two men without credentials, who demanded to search his work on behalf of "the voters," the lawsuit claims.

The threats and intimidation outlined in the lawsuit mirror similar experiences shared by Republican Philadelphia City Commissioner Al Schmidt, who recently testified before Congress about the impact of the Trump campaign's false allegations of voter fraud.

Savage is seeking more than $50,000 monetary damages for claims of defamation, false light invasion of privacy and civil conspiracy.