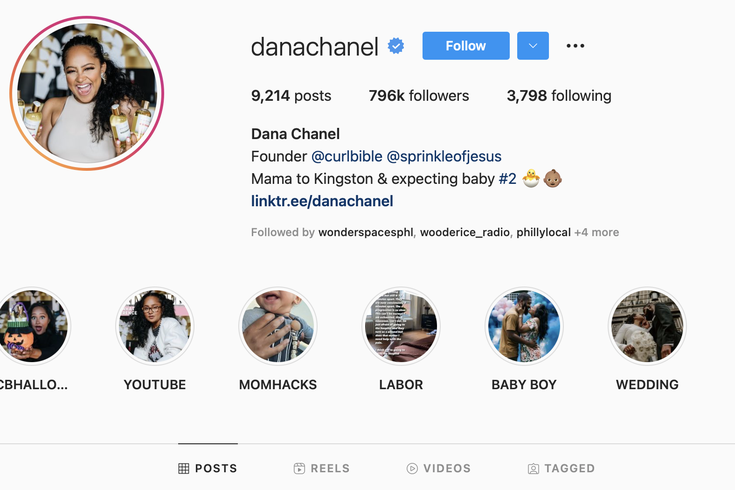 Influencer Dana Chanel has been sued by the Pennsylvania Attorney General's Office after the Bureau of Consumer Protection received multiple complaints from customers of her businesses who said they were misled and scammed.

Philadelphia-based social media influencer Dana Chanel, best-known as the founder of hair and skincare brand Curl Bible, has been sued by the office of Pennsylvania Attorney General Josh Shapiro over allegations that her affiliated businesses scammed consumers who paid for credit repair and marketing services.

Chanel, whose real name is Casey OIivera, has more than 796,000 Instagram followers and frequently posts cheeky videos that promote Curl Bible's beauty products and packages. She also founded the Christian mobile app Sprinkle of Jesus, an "online ministry" with more than five million members that sells religious-themed products, shares inspirational messages and preaches entrepreneurship as a way to break the cycle of intergenerational poverty.

Pennsylvania regulators began looking into Chanel and her business associates after receiving complaints from customers who said they were misled about services they paid for but never received. Many of the customers were small Black-owned businesses in Philadelphia.

“Dana Chanel built a following online by presenting herself as a Black woman-owned small business success story,” Shapiro said Friday. “She advertised the products of her companies as a way for other black small business owners to achieve what she did. Then, she ripped off the same community she claimed to care about.”

Among the complaints detailed in the lawsuit, one customer, a non-profit, paid Alakazam $2,000 for help building a custom app and guidance on how to maximize using it. The customer allegedly never received the app and never heard back from Chanel after reaching out more than 10 times to obtain a refund, according to the lawsuit.

Other Alakazam customers alleged that they paid for an app to be built, but instead received only a business marketing manual, or were billed for a $250 monthly hosting fee for apps that were never completed.

"Some consumers who paid monthly hosting fees to Alakazam never received a completed mobile app from the company or received a mobile app that lacked a minimum level of functionality necessary to give the product any value to the consumer," the lawsuit says.

Chanel's other company, Credit Exterminators, which she runs with her sister, Cassandra Olivera, claims to offer guidance and instruction to individuals and businesses seeking to improve their credit scores. Widely marketed by Chanel on Instagram and later rebranded Earn Company, the service included $300 "VIP" packages and $100 "DIY" packages that claimed to either directly dispute issues with credit reporting agencies or otherwise provide customers with step-by-step direction for doing so. Both packages also carried monthly charges and fees.

Multiple customers complained that they never received the promised personalized services in these "VIP" packages. When the customers followed up with credit reporting agencies to check on the status of disputes, they learned that Chanel's companies had never made them. Customers who then sought refunds were denied or never received responses, according to the lawsuit.

One Credit Exterminators customer allegedly paid the company $2,000 believing that Chanel and her associates would resolve delinquent credit accounts on her behalf. The customer later received a garnishment of wages letter from a creditor who was supposed to have been contacted and settled with based on the services she paid for from Chanel's company.

Chanel has not publicly commented on the lawsuit.

“It’s hard enough these days for workers in Philadelphia,” Shapiro said Friday. “We can’t have bad actors breaking the law and making it even harder for folks to resolve their bad credit or keep their small businesses afloat.”

Consumers who feel they were victimized by Alakazam Apps, Credit Exterminators or Earn Company are encouraged to file a complaint online or contact the attorney general's Bureau of Consumer Protection at (800) 441-2555 or by email at scams@attorneygeneral.gov.