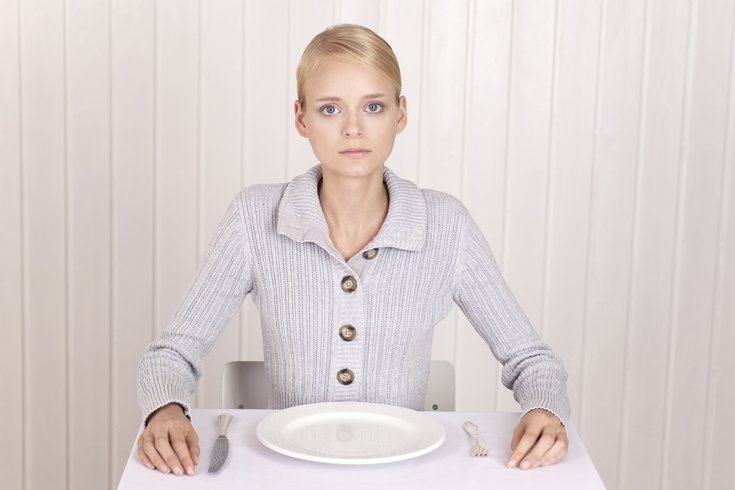 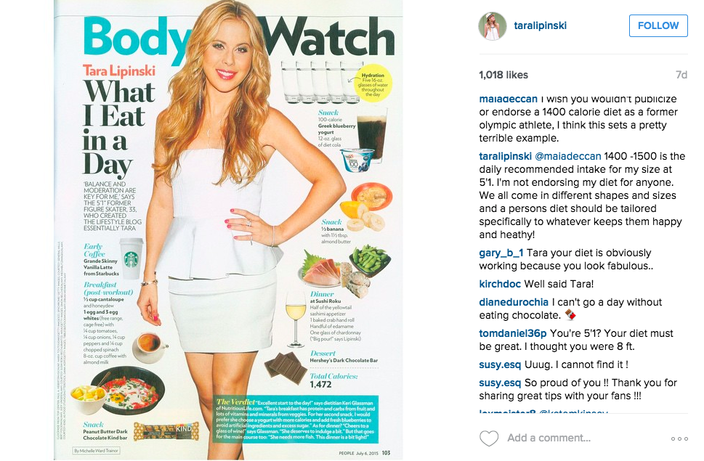 My eyeballs immediately honed in on the vital statistics. They’re well trained for this sort of analysis.

“Body Watch” chronicles the daily dietary intake of the rich and famous to a T, as in, to the very last tablespoon of fat-free Italian salad dressing. As its title suggests, "Body Watch" perpetuates the idea that healthy eating isn’t about achieving health, it’s about attaining a certain body - someone else’s body.

Lipinski is a former professional athlete. Though a slew of injuries ended her competitive figure skating career at the age of 15, her current Instagram account portrays a vibrant, 30-something social butterfly whose life is a whirlwind of activity. Rose-filtered photos show Lipinski toting her yoga mat to class and modeling the new, floral print Nike Pegasus, presumably before embarking on an afternoon jog.

People.com published another version of Lipinski’s daily diet as part of its online “Great Ideas” feature. On this particular day, she supposedly survived on just 1,228 calories.

Glancing at her itemized intake, I learned she considers two Hershey’s Kisses and a can of diet cola a “cheat snack.” She, like many celebrity diet gurus, employs the words “balance” and “moderation” as euphemisms for “extremism” and “deprivation.” People’s self-professed celebrity nutritionist Keri Glassman also weighs in on Lipinski's diet. Though she admits Lipinski should “up the amount of food,” Glassman first chastises her for eating “too many carbs” (1 cup of cereal and a bagel) after her morning workout before making a big stink over 2 tablespoons of whipped butter.

By this point in my life, I’ve learned to take this kind of celebrity “Skinny Vanilla Latte” diet advice with a grain of salt. As an athlete, I’ve figured out how to adequately fuel my body to support my active lifestyle. But that learning curve took nearly 30 years.

Before I became a runner, I was a figure skater like Lipinski. In fact, I trained side-by-side with her at one of the most elite skating facilities in the country during the mid-1990s. When I was 10, I looked up to Lipinski, who took the skating world by storm at the precocious age of 12. Back then, I read every book and article written about her. Journalists gushed about how tiny and lithe she was, weighing just 68 pounds. People around the rink whispered all sorts of rumors about how exactly she managed to skirt puberty.

In 1997, just one year before she won the Winter Olympics in Nagano, Christine Brennan published a controversial book called "Inside Edge" that plunged into the empty, ravenous underbelly of the elite figure skating world. "Inside Edge’s" scandalous exposé details desperate accounts of female stars on ice who subsisted on nothing but carrot sticks and mustard. When you’re 12 years old, and you read stuff like this, you eat it up.

Nearly a decade later, I too weighed 68 pounds. I was 21 years old. My skating days were long over. I didn’t do much of anything anymore. I simply didn’t have the energy. My entire life had fallen by the wayside. I’d lost the passion I once had for athletics. My academic achievements stopped pitifully short of my potential. I’d spent my teenage years in and out of eating disorder treatment facilities, which only perpetuated the problem. Eating disorder units are full of retired adolescent figure skaters, gymnasts and ballerinas who’ve been spoon-fed the same drivel by their athletic heroines: To be a successful athlete, you must consume less, not more.

Quite the opposite is true.

If Lipinski’s various skating injuries left her bedridden, perhaps a 1,500-calorie diet would be enough to sustain her today. However, her People magazine feature promotes her burgeoning brand as a fitness and lifestyle guru, “Essentially Tara.” On the "Essentially Tara" blog, Lipinski details her commitment to an active lifestyle, which includes running, practicing yoga and jet-setting around the world as an NBC sports commentator. This is where I take the most issue with her diet advice. When I was a little girl, I had to dig through library books to find out how little my idols claimed to eat. Today, girls and young women who look up to Lipinski and watch her sports analysis on TV need only look up her dieting advice on the Internet.

One young woman commented on Lipinski’s Instagram post, “I wish you wouldn’t publicize or endorse a 1400 calorie diet as a former olympic athlete, I think this sets a pretty terrible example.”

To which Lipinski replied, “1400-1500 is the daily recommended intake for my size at 5’1. I’m not endorsing my diet for anyone. We all come in different shapes and sizes and a persons diet should be tailored specifically to whatever keeps them happy and healthy!” 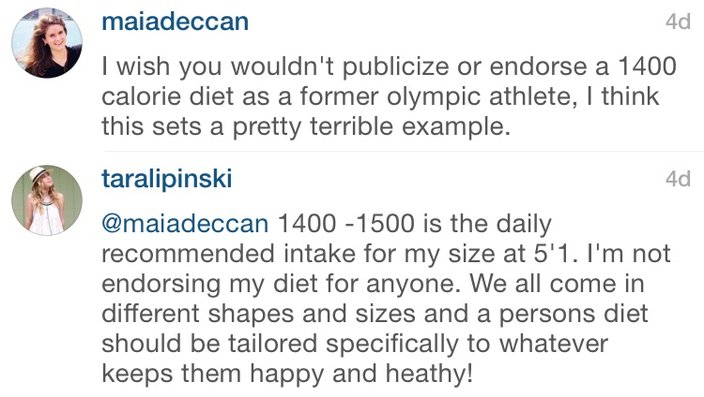 Second, simple math proves 1,400-1,500 (not to mention 1,200) calories a day is not enough to sustain a young, active woman, no matter how short she may be. A woman who is 5 feet 1 inch tall has a basal metabolic rate of approximately 1,300 calories. This means she needs to eat 1,300 calories a day just to stay alive. If you factor in an hour of physical activity (300-600 calories), plus the energy she expends on routine tasks, like shopping (something Lipinski ostensibly does a lot of), her daily energy requirement ends up much closer to 2,000 calories.

For example, I, like Lipinski, stand 5 feet 1 inch tall with a lean, athletic frame. As a recreational athlete, I train anywhere between 30-90 minutes a day. I spend the rest of my time as a freelance writer, sitting for hours a day at my desk. People magazine would never publish my diet because it’s assuredly not glamorous and often involves eating ice cream straight out of the carton while inadvertently losing rogue chocolate chips between my computer keys. However, I feel it’s my moral obligation to athletic young women (especially those prone to developing eating disorders) to counter People’s deadly celebrity diet advice with a reality check: I eat 2,000-3,000 calories a day. So do all of my fit, athletic friends. Anything less, and we’d keel over.

To be a successful athlete, you must consume more, not less.

If a young, aspiring figure skater, or even a moderately active adult female, were to follow Lipinski’s 1,200-calorie diet, she would not remain active for very long. For her, a 1,200-calorie diet is a starvation diet.

1,200 calories a day is what extremely malnourished patients are fed when they’re first admitted to the hospital after prolonged periods of starvation. It’s just enough to keep them alive without inciting (potentially fatal) Refeeding syndrome. It’s just a fraction of what they’ll eventually need to achieve and maintain a healthy weight.

1,200 calories a day is barely enough energy to keep you alive in a hospital bed. It is certainly nowhere near enough energy to support countless scratch spins and double axels and laps around the track.

Trust me, I know.

Elizabeth Licorish is a freelance writer and author from Philadelphia.