Door or Beach? Here's another internet dispute to destroy us all 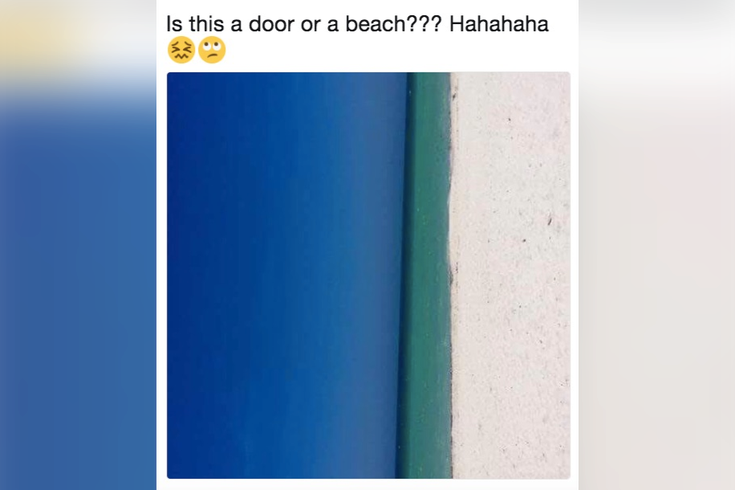 Here's yet another new Internet debate: do you see a door... or the beach?

First it was The Dress.

Then it was the gif that seemed to make sound. Most recently, it was the great debate of Yanny vs. Laurel.

Now the internet has a new fleeting conspiracy to further destroy us: Is this the beach ... or a door with a not great paint job?

Is this a door or a beach??? Hahahaha😖🙄 pic.twitter.com/f4DZ7MZzGy

The original poster of the mystery even put out a poll that has nearly a quarter million votes.

A lot of people online said they could see both, though there are questions on both sides. If it's beach – where's the sun at? What about the people, seagulls? And there's not a cloud in the sky? If it's a door – where's the handle going? Why would someone use green trim?

MORE things to keep me up at night https://t.co/wXdDhOKnsM

It's clearly a door wym pic.twitter.com/XlCwtMTTIw

After a few days of Internet clamor, the original poster "revealed" that it was a beach, unveiling a new photo with people swimming in the same setting.

Not everyone was convinced, however. One Twitter user pointed out that the picture looked like it could be photoshopped.

The people in this image have clearly been poorly photoshopped in.
Zoom in, you'll see the squares around each set of people.

BUT, the perfectly square, pasted sections are even lower resolution, coincidently only around the people, which is what makes them stand out so much. 😁
2/2 pic.twitter.com/sh0w5bIquN

Nonetheless, all signs point to the sea. Buzzfeed ran an intense investigation, using reverse image search to identify the beach/door pic as the view from Miramar Beach in Florida. The viral photo was heavily photoshopped and darkened to heighten the mystery.