'The dress' is back, in audio form, with 'Yanny' vs. 'Laurel' debate 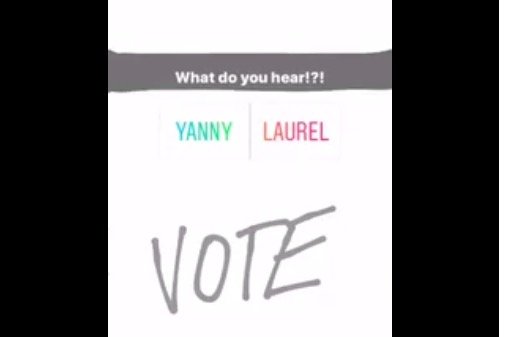 Are you Team Yanny or Team Laurel?

Tuesday was voting day in Pennsylvania and three other states as the country undergoes one of the most contentious times in recent American history, but it was a different nationwide debate that captivated the minds of citizens as returns rolled in:

Just as “The dress” of 2015 sparked debates across social media, offices, and classrooms, giving way to a hundred different think pieces, this audio discrepancy is already having the same effect.

First posted on Reddit and then Twitter, the audio clip streams of seemingly distorted recording of someone saying … something … that has people divided.

Listen below for yourself then scroll to the poll at the end of the article to let us know what you hear.

What do you hear?! Yanny or Laurel pic.twitter.com/jvHhCbMc8I

As of Tuesday night, the Twitter debate was alive and well as users weighed in on being Team Yanny or Team Laurel.

it's so clearly laurel. I can't even figure out how one would hear yanny.

Literally everything at my show just stopped to see if people hear Laurel or Yanny. I hear Laurel. https://t.co/efWRw1Gj0L

You either die a Yanny or live long enough to see yourself become a Laurel.

If you wanted to know whether I hear Yanny or Laurel here's your answer. 😎☕️ pic.twitter.com/xnrIby2kmd

I know this is a very niche tweet, but can I just say that #YannyOrLaurel is my favourite Sufjan Stevens album.

I don't hear Yanny or Laurel, I only see a dress

Just as the blue-and-black vs. white-and-gold dress debate turned out to have some reasoning and science behind it, many have already delved into what makes some people hear “Laurel” versus “Yanny,” and which one was actually said in the original record.

One expert told CNN that the poor quality of the recording lends itself to the debate. Depending on the pitch of the recording, you can hear either word, as demonstrated below.

An expert analysis of the clip, however, showed that it was most likely “Laurel” during its original recording, according to CNN.

Regardless… which do you hear?

Vote: What do you hear?