Jim Kenney's disdain didn't stop droves from joyously gathering near Roosevelt Blvd. to get free meals for a year 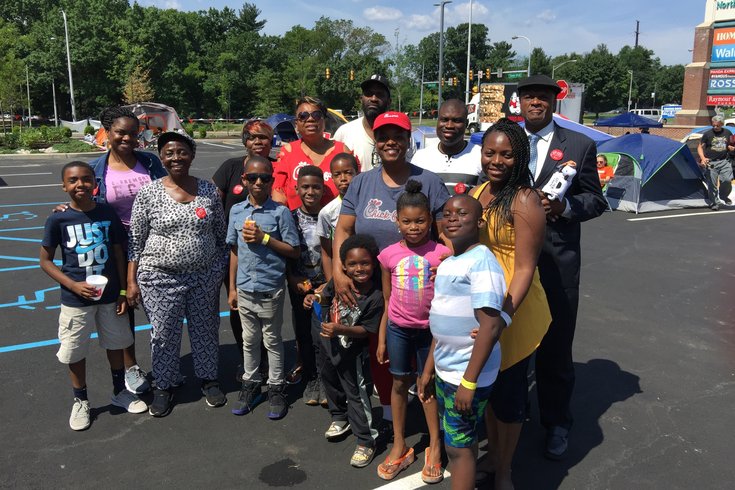 Family and friends joined Marvina Bolton (wearing red hat) to camp outside the new Chick-Fil-A location on Roosevelt Boulevard in Northeast Philadelphia. Wednesday's gathering marked the 54th time she's camped out at a Chick-Fil-A to receive a 'free meals for a year' gift card.

Should she remain at a makeshift parking lot campground until 6 a.m. Thursday – and, oh, she will – that bracelet means she’ll get the first of 100 gift cards entitling her to 52 free meals once the restaurant officially opens.

Sporting a red Chick-fil-A hat and gray Chick-fil-A T-shirt festooned with three Chick-fil-A pins including a nametag, the once-strict vegan explained that cravings during her third-trimester with son Semaj centered on chicken and fish.

That, she said, is how she originally found a path that led to this day, the 54th time she’s driven her Infinity to camp outside Chick-fil-A locations as part of a 13-year-old franchise-wide Community First 100 practice of giving these opening-day gift cards away.


She’s told in a parking lot featuring more than a dozen tents, freshly dried paint and red-and-white banners that her nearly five years on the Chick-fil-A trail seems somewhat bizarre. The affable Bolton just laughed at something she’s heard before. 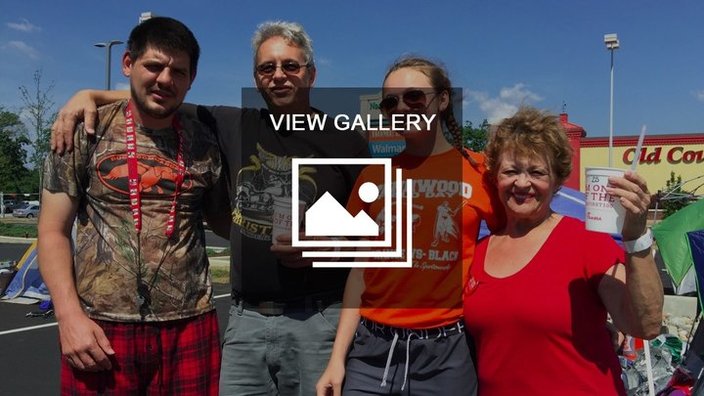 Dave Sabalusky, second from left, has camped out 30 times for Chick-Fil-A 'free meals for a year' gift cards. He was joined by his daughter Deanna and friends Tony and Pat outside the new location at 4600 Roosevelt Boulevard in Northeast Philadelphia.

"Some people think (it's crazy), but it all comes down to what you value. For some people, it's poetry or piano. For me, it's Chick-fil-A," said Bolton, a licensed funeral director who maintained the community built through these events helps bring balance to her life. “It’s not just about the free food. It’s the people. It’s the values. This is just who I am. My career takes a toll. This is therapeutic. It brings balance to my personal and professional lives.”

By “we,” she meant herself, Semaj (who was playing basketball and football in the lot with other kids), her mother Dorine Mott (who’s camped out some 25 times) and about a dozen friends and relatives who were among the first 40 at the lot on Wednesday morning.

"Some people think (it's crazy), but it all comes down to what you value. For some people, it's poetry or piano. For me, it's Chick-fil-A." – Marvina Bolton, Chick-fil-A enthusiast

“Three generations here,” said Bolton, admitting her ultimate goal is to be a Chick-fil-A franchise owner herself one day and noting that the Christian mindset espoused by the chain aligns with her own. “I’ve been places I never would have been because of this.”

While Bolton didn’t get into the mix until a 2011 campout in Sewell, New Jersey, the offering traces back to 2003, when customers in an RV arrived outside a location in Phoenix the day before it formally opened.

“We thought, ‘Let’s just make it a party,’” said Cindy Chapman, Chick-fil-A spokeswoman about that RV which launched a practice that sees campers receive free breakfast, lunch, dinner, Oreo-eating contests and an ice-cream social while they await the grand opening.

Bolton’s attendance record was bolstered by long drives in her car to new locations, but the chain recently enacted a zip-code eligibility rule to make gift cards more accessible to locals. (In the case of the Roosevelt Boulevard location, it was open to residents of 146 local zip codes.)

Chapman said the chain opens an estimated 90 new locations a year. Each card grants access to 52 No. 1 chicken sandwich combo meals ($5.99 locally), putting the franchise “cost” at roughly $32,000. Customers aren't bound to only using the card once a week; if they want to bring 51 friends to any location, their meals would be covered by the card.

This is nowhere near the first time it’s been written about – Bolton said a reporter once estimated that she spends 20 percent of her life on Chick-fil-A road trips – so the expense does draw attention (countering sometimes-bad press) and customer loyalty.

“The Bible says that if you give, you get back. Chick-fil-A gives a lot. They’re the fastest-growing chain because of living by Biblical principals. God recognizes this.” – Dave Sabalusky, Bucks County resident

Dave Sabalusky of Morrisville, Bucks County, is an accurate reflection of that latter benefit. He’s done the First 100 trip about 30 times.

“Georgia. Connecticut. Rhode Island. Maryland. Virginia. Pennsylvania. Delaware,” he said, ticking off a list of trips that started near the Oxford Valley Mall when his 14-year-old daughter Deeana was just 3. “I like the Chick-fil-A fellowship. They’re Christians. That’s why I like it so much.”

Sabalusky introduced a pair of friends from his church in Bucks County, and his daughter, all of whom got their bracelets early in the day. He talked about camping when it was “8 degrees out, so cold your head hurts” but quickly brought it back to religion via discussion of how the restaurant is closed on Sundays, much to the dismay of many customers.

“The Bible says that if you give, you get back. Chick-fil-A gives a lot. They’re the fastest-growing chain because of living by Biblical principals. God recognizes this,” he said, noting that before the zip-code rule came into play, there was a contingent that regularly showed up at many grand openings. “You don’t see McDonald’s doing anything like this. What Chick-fil-A is doing is working. They’re serving the community.”

In this case, the man in charge of serving at the Northeast Tower Center location is franchise owner Duane Pierce, who was collecting books to benefit the Feltonville Boys & Girls Club.

Pierce moved to Philadelphia nearly a year ago after learning he’d been awarded a franchise here. His background is in the U.S. Air Force, intelligence with the National Security Agency and 23 years with the Howard County (Md.) Police Department.

He was friends with a family that owned six locations, and they urged him to give it a shot. Originally slated to open in January, Pierce said a parking lot sinkhole threatened to delay it even further. Luckily, that crisis was averted, and he's psyched for the 6 a.m. opening inside a restaurant abuzz with staff (both local and having traveled here to help) finishing their final preparations.

“The one thing that really drew me to the market was coming up here, talking to residents and kinda get to know the people,” he said of an operation that currently employs 95 people.

“Everybody around here said, ‘You know, we don’t have anything great to eat right here. When we want to eat, we choose to drive 15, 20 minutes to get something good to eat,’” he continued. “We want to be part of something much larger than just ourselves, to be here in the community and be involved. It’s not just about selling chicken.”

As of 4 p.m., 35 bracelets remained for those willing to commit to staying in the parking lot overnight to reap their rewards starting a 6 a.m. Thursday.