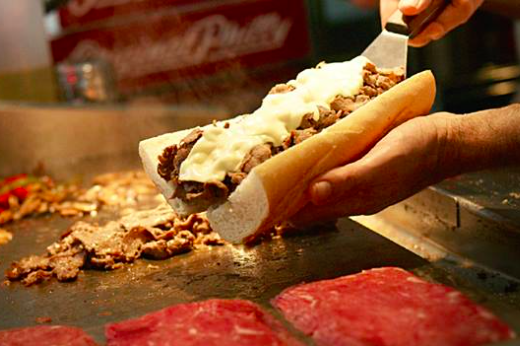 This is an example of a real cheesesteak, not one made in Florida served in a seeded roll.

A man upset he had been served a cheesesteak on a sesame seed bun was arrested and charged with disorderly intoxication after allegedly yelling at one man and instigating a fight with another, authorities said.

The incident took place in Odessa, Florida, which could offer some explanation for perhaps a naive misunderstanding on behalf of the sandwich maker. (Here's hoping.)

Joseph Lagana, 27, was at a flea market in Odessa on Sunday when he was served the seeded-roll sandwich – repeatedly and incorrectly referred to as a "Philly cheesesteak" in other media reports (for example) – and allegedly started a verbal altercation with a cashier.

According to the affidavit, Lagana then started a physical fight with a male, who was the owner of the flea market. The owner chose not to press charges but did say Lagana caused a public disturbance.

Police said post-sandwich Lagana was being "loud and argumentative" to multiple people at the flea market, appearing heavily intoxicated. He also was slurring his speech and had lost some fine motor skills, according to the police report.

He was arrested and taken to the Land O Lakes Detention Facility (yep, that's actually the name).

It's unclear here if Lagana has a connection to Philadelphia, but if he does, he naturally had to take a stand in the name of good cheesesteaks. Or maybe he's an outsider that just understood the gravity of the situation.

It will be determined at a later date whether Lagana is guilty. Either way, one party involved is definitely guilty: The maker of the "Philly" cheesesteak.