Protesters learn of DeVos confirmation during 'Tuesdays With Toomey' event 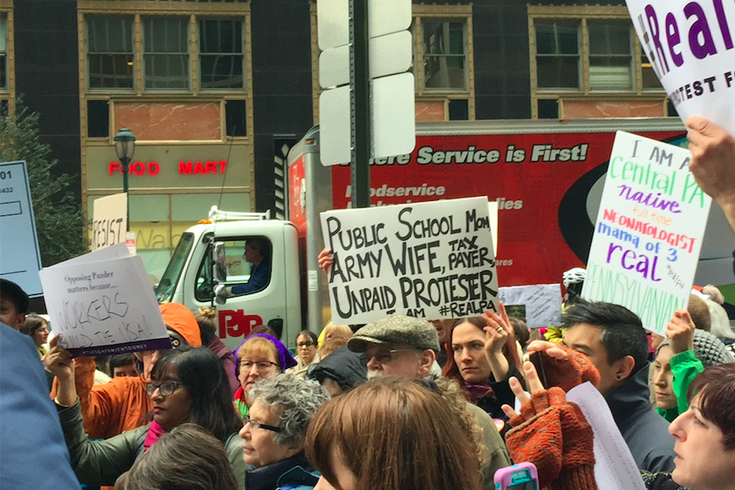 Among the hundreds of protesters who showed up outside U.S. Sen. Pat Toomey's office on for the 'Tuesday's With Toomey' event on February 7, 2017 was Katie Dyck. Her sign explained how she was there not just for herself, but her husband and children.

This week’s “Tuesdays With Toomey” protest in Center City represented a call on the senator “to support economic justice by opposing Andy Puzder for Secretary of Labor.”

About 10 minutes into the rally, though, attention turned to some news that wasn’t immediately available to the hundreds who showed up. That is until one of them yelled out, “DeVos was just confirmed.”

He was speaking about Betsy DeVos, the controversial nominee for secretary of education who – as protesters spoke into a microphone outside the JFK Boulevard building that houses Toomey’s local office – was confirmed in a historic 51-50 vote in the U.S. Senate, with Vice President Mike Pence casting the deciding vote.

Instantly, the chants started. One side of the group started in with “Shame.” Soon, the other side countered with “Shame on Toomey.”

For this group, the vote represented a gut punch. They’ve dedicated a lot of effort in an ultimately unsuccessful attempt to derail that confirmation. But it may have also represented a vote that galvanized the opposition.

“Walking around, I’m hearing this has energized a lot of people,” said Tuesdays With Toomey organizer Angela York-Crane, holding a bag of letters from protesters to be carried inside doors – they were blocked by four Philadelphia police bicycle officers – and shared with the senator’s staff.

Soon, they would get back to the Putzer nomination and other topics, as a sizable crowd again gathered to have their voices (and the sounds of a “Not My President” tuba symbolically – if not physically – heard.

As with the case with many protests across American in recent weeks, the sign creativity game was on point. Among those seen at Tuesday’s protest: “Resist Agent Orange,” “So Pennsylvanians I’m drinking with Punxsutawney Phil,” “Professional Unpaid Anarchist, Real Voting Pennsylvanian,” and “This snowflake is here to tell you winter’s coming.”

Among the speakers during the hour-long protest was Myra Young of Witnesses to Hunger. A longtime activist, she spoke about the challenges of caring for disabled children with limited funds and assistance. 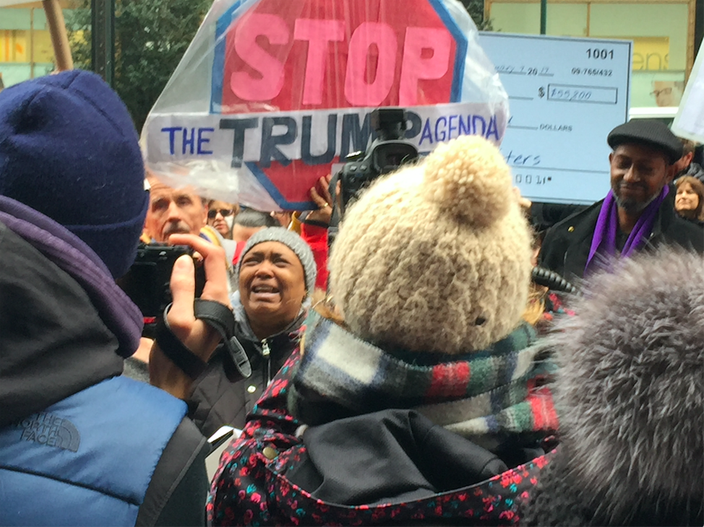 Myra Young of Witnesses to Hunger breaks down in tears after speaking at the weekly 'Tuesdays With Toomey' protest on February 7, 2017.

“Senator Toomey, I have a question for you: Would you be able to live, would you be able to survive, one week in my shoes?” she asked. “I challenge you to spend even one day trying to manage my life, manage the daily struggles as I just try to feed my family, manage the stress of not working (not knowing) if you will be able to pay rent this month, and manage the fear that your children might need healthcare that you can’t afford.

“Senator Toomey, I look at you and you have everything that I want: A safe home to go home to, a job that pays a good wage, a family in good health. And yet, you want to take away the little bit that I have, and want to cut programs that feed our families. They keep us down and it makes me angry. You are wrong if you don’t protect these programs. You are wrong if you don’t care about my family and anybody else’s family that lives in poverty.”

After speaking for several minutes, Young broke down crying amid the crowd.

Anger was the other emotion exhibited by attendees. They included Matthew Cross, a Philadelphian who’s been coming to the protests since early November. In one arm, he held his young son Marzan; in the other, a sign that read, “Our senator refuses to stand up to white nationalist Steve Bannon.” 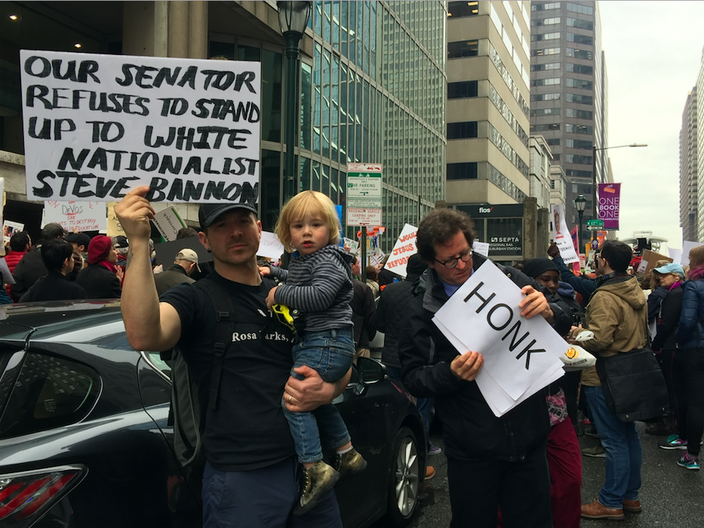 Matthew Cross and his young son Marzan attended the Tuesdays With Toomey protest on February 7, 2017. Cross has been coming to these events near 17th Street and JFK Boulevard since November.

He was asked why he’s been protesting.

“The threat that comes from a white nationalist being in our government, and repealing (the Affordable Care Act) without a replacement,” he said. “I have a young son.”

Not far from Cross stood Katie Dyck. She held a sign that said, “Public school mom, Army wife, taxpayer, unpaid protester, I am #RealPA.” As the protest came to a close just before 1:30 p.m., she said she was concerned about the DeVos confirmation among many other things.

“I don’t want her having anything to do with their public school education. I’m concerned about the minority president as my commander-in-chief and I’m the wife of a soldier who made it safely home from Iraq in 2005 thanks to the help of a Muslim Iraqi translator,” she said.

As for Toomey’s take on the recurring protests outside his Center City office, spokesman Steve Kelly noted that staffers have met with them “multiple times in various state offices in recent months,” including a gathering in Philadelphia on Monday.

“Senator Toomey’s staff is happy to meet with constituents in the office from time to time as issues warrant," he said, "and the senator appreciates hearing from Pennsylvanians and keeps their thoughts in mind when considering all issues.

“This group continues to protest on days when Senator Toomey is in Washington, D.C. conducting official business. They have every right to continue their protests.”