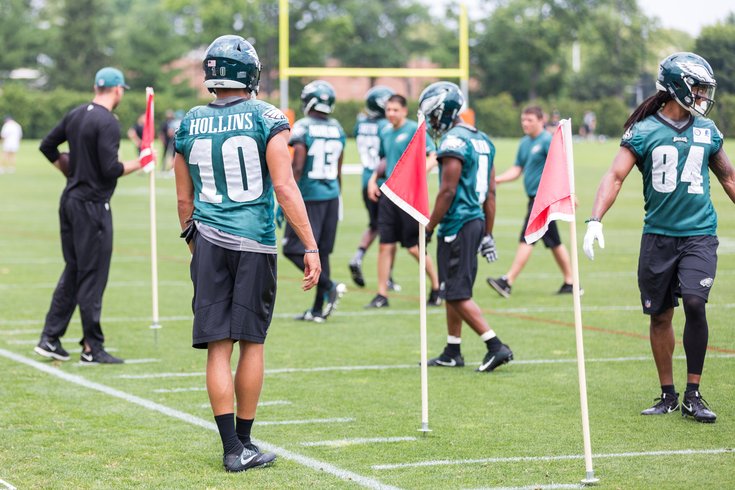 Mack Hollins is basically a mix of Jerry Rice and Jon Dorenbos.

We remain in the slower portion of training camp, as it's still only quarterbacks, rookies and select vets participating. When the team in its entirety shows up later this week, action will pick up, but for now, here's what I saw from the young guys on Day 2 of camp.

• Greg Ward is the early leader in the clubhouse for the Na Brown Award. On Monday, he made two really nice touchdown receptions. On Tuesday, he added another pair of notable plays to his resume. The first was a deep ball down the sideline that he caught for a nice gain. There was nothing flashy there. He simply beat his man deep down the field, and Nick Foles fit in a nice lofty touch pass in the right spot.

The second notable catch was more impressive. While already in the end zone and working back toward to quarterback, the ball came Ward's way, and it looked like Ward tried to slow his momentum so the ball would cross the goal line before he caught it so it would count for a TD instead of catching it shy of the end zone. If that's indeed what he was going for, that was great awareness.

To note, I'm unsure if the coaches would prefer he continues to attack the football in that scenario by continuing to come back for it.

• Obviously, guys like Alshon Jeffery, Torrey Smith, Jordan Matthews, and Nelson Agholor have yet to report to camp, but the clear-cut best receiver the first two days here is Mack Hollins. His size alone gives him a big advantage, but unlike other taller receivers in past Eagles camps like Ifeanyi Momah, he moves very fluidly throughout all his routes. There's no awkwardness. Today, he made a nice catch over the middle from fourth-string quarterback Dane Evans in which he got position then worked inside and made the play. It just looked natural and easy.

• One other Hollins note: He was getting reps today as a long snapper, and actually looked pretty good at it. Obviously, Eagles fans saw what can happen when you lose your long snapper in the middle of a game, as they did last season against the Redskins. Having a position player who can step in and be a reasonably competent long snapper isn't needed most seasons, but it's nice to know that you have one in an emergency.

And it makes sense that Hollins is good at that. During his career at North Carolina, he made a name for himself as a special teams standout, so he's clearly a player that wants to do everything he can to help his team win.

• Marcus Johnson is a receiver the team likes. He bounced back nicely after a shaky day yesterday. In one red zone drill, he was able to shake free from Rasul Douglas and get plenty of separation in the back corner of the end zone for a TD.

• One defensive back who made a nice play today was UDFA CB Jomal Wiltz. Playing in the slot, Wiltz stepped in front of Hollins on a switch. Hollins was lined up outside but worked inside on what looked like a rub route. Wiltz jumped the pass and had the ball deflect high in the air off his pads. Joe Walker was able to jump high to grab the jump ball for the INT.

• While Walker showed some leaping ability on the play noted above, he does not look like he's completely back to 100 percent after tearing his ACL during the preseason last year. It's not obvious, but Walker is still running with a very slight limp. Undrafted tight end Billy Brown was able to get good separation on Walker on a corner route.

• Brown had a nice day. In addition to beating Walker, Brown caught a lot of shorter passes over the middle and showed a little ability to get upfield after the catch. Additionally, on a play in which Brown was not involved in the play, he was able to chase down and strip former Shepherd teammate Tre Sullivan, who had picked off Evans deep down the field.

• Among the select veterans here early in camp is Ron Brooks, who ruptured his quadriceps Week 6 last season, and was placed on injured reserve. Had the Eagles released Brooks, they would have saved $1.6 million. Instead, Brooks took a pay cut, lowering his salary from $1.85 million to $1 million.

On Monday, Doug Pederson said that Brooks is "obviously our nickel defender, nickel corner." That wasn't obvious to me, personally. Brooks didn't participate in team drills during the spring, so we'll keep an eye out for his potential presence with the first team defense when the rest of the team shows up.

In his first two days of training camp, Brooks has probably been the best corner on the team, which is either a pleasant surprise or a discouraging development, depending on your viewpoint.

• Rookie DE Derek Barnett got an earful from defensive line coach Chris Wilson in one-on-one drills. Wilson was getting on Barnett for not initiating contact soon enough on his inside spin move. Barnett's initial line to the quarterback was too wide, and Wilson wanted Barnett to tighten it up. We'll have more on Barnett soon.