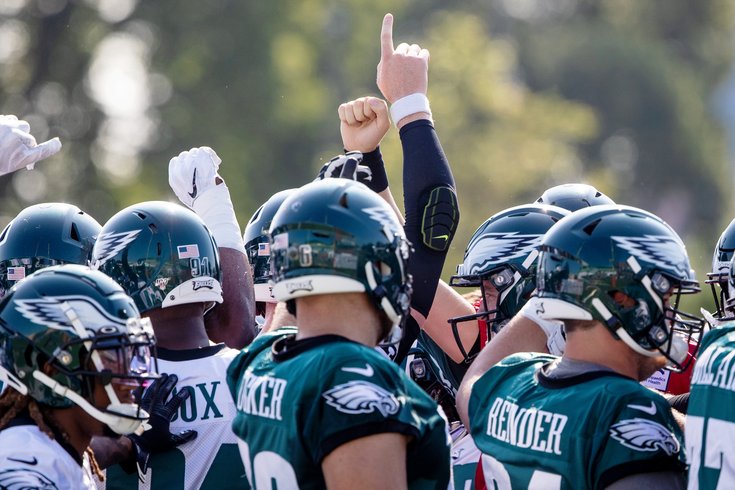 Carson Wentz (hidden) is disqualified after throwing an index finger in the Eagles' annual rock-paper-scissors tournament.

The first week of Philadelphia Eagles training camp is in the books, so let's go ahead and project what the 53-man roster will look like after final cuts, shall we?

Thorson hasn't shown much throughout the spring and the first week of training camp, and frankly he's been outplayed by Cody Kessler. But, well, he's a fifth-round pick in a five-man draft and the Eagles are highly likely to give him time to develop.

When practices began this spring, I'd have given him something close to a 95 percent chance of making the team. Now I'm around 50-50. We'll leave him on until his play in the preseason games matches what we've seen in practice. If he shows anything in the preseason games, I think the Eagles would just keep him rather than risk him getting poached by some other team while trying to get him onto the practice squad.

Are we sure Clement is a lock to make the team? I'm not so sure, but for now we'll project him to stick.

Wendell Smallwood could finally see his nine lives run out this year with the team having signed Darren Sproles. Of course, the Eagles could also always keep five running backs, with the fifth being Smallwood or Josh Adams.

The first four guys are locks, and Hollins was active in the regular offense before he suffered yet another injury. His setbacks are frustrating, but I don't think the Eagles are close to giving up on him yet.

The Eagles could certainly keep six receivers. They could keep on hoping Shelton Gibson will become a contributor, or they could keep a slot receiver type like Greg Ward or spring practice darling Marken Michel.

I'll also quickly note Carlton Agudosi, a 6-foot-6 receiver who has made some plays. He would make sense for the practice squad as a guy who mimics bigger receivers.

I don't see the Eagles keeping a fourth tight end, at least with what they have on their roster.

Howie Roseman doesn't like cutting roster-worthy offensive linemen, so I think the Eagles will go heavy there this year, as trading one could be difficult. Mailata hasn't had a strong camp, but they'll continue to develop him.

Joe Ostman is basically a combination of Reggie White and Derrick Thomas. He narrowly makes the cut after a strong camp. Rookie fourth-round pick Shareef Miller won't get cut, but he's a candidate for the redshirt IR season. He could use a year in the weight room.

Yep, I think the Birds go heavy on the lines this year, keeping 10 on each side. They're all roster-worthy.

Do I think it's crazy that the Eagles would rather have L.J. Fort and/or Andrew Sendejo than a fourth-round comp pick? Yes, yes I do. But that's where we are, I believe, in a season in which the Eagles are Super Bowl contenders. Ideally, the Eagles would like to see UDFA LB T.J. Edwards step up, but he has had a quiet camp.

For now, we'll project Jalen Mills to stay on the PUP list for the first six weeks, and Scandrick holding down the vacated corner spot until he returns.

Blake Countess is the "starting" upback on the punt team, so he'll be someone to watch as a special teams contributor. He'd be my next guy on if I could keep 54.

• CB Jalen Mills: There's no indication that Mills is returning anytime soon, and I think he'll start the season on PUP, thus making him ineligible to play the first six weeks of the season. With plenty of corner depth, the Eagles can afford to take their time with Mills, and as an added bonus, his price tag in 2020 free agency might be more reasonable.