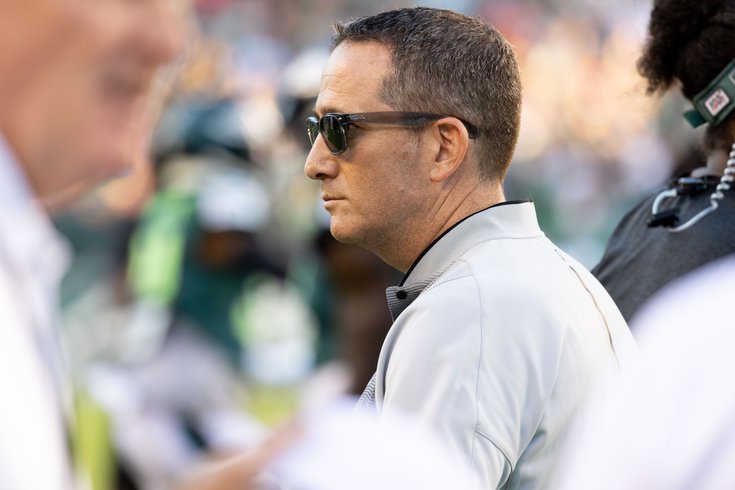 The Philadelphia Eagles are now through two preseason games, so let's go ahead and update our 53-man roster projections.

As you saw on Sunday, Sinnett has an arm.

His throw to Devon Allen was a glimpse into what we have seen in practices this summer. He wasn't great otherwise, but he has big league tools worth developing, and the Eagles like to keep three quarterbacks on their roster.

While Scott and Gainwell did some nice things against the Browns, the Eagles still need to add a power element to this group, in my opinion. Huntley and Brooks have not done enough to crack the roster.

Covey was looking for a while like he was going to make the team, but that feels less likely now. He has one catch on six targets for five yards in the Eagles' two preseason games. Is there really a team out there poised to claim him off of waivers if the Eagles cut him? Covey is a player the Eagles can pretty easily bring back to their practice squad, I think.

Cain has had a nice camp and he came to play against the Browns on Sunday, making several good plays on the football. There just isn't room for him, though, unless the Eagles trade Reagor.

Calcaterra didn't play on Sunday after returning to the practice field on Friday, which I think is actually a good sign for his roster spot. If he were a guy just trying to make the roster, maybe the Eagles would have let him compete. Instead, he got the day off as the Eagles let his hamstring heal up some more.

The tough call here is whether or not they keep nine or 10 offensive linemen, and the bubble player in that scenario is Anderson. The Eagles pulled Jurgens after two series, and Anderson moved from LG to C. He has gotten reps at all three interior line spots with the second team offensive line, and the Eagles love OL versatility.

These four guys are locks. Jackson seemed to have a rough game on Sunday, but he has had a good camp.

Wilson and Smith have done some nice things, but they are likely destined for a spot on the practice squad if they're not claimed by some other team.

Kyron Johnson is another tough call. He stood out at times on Sunday, flying around the field, but has had a quiet camp. As a reminder, the Eagles traded up to draft him, so I think he'll stick.

It is clear that the Eagles like Jobe, who has run with the second-team defense in each of the Eagles' first two preseason games, getting a start on Sunday. He has good instincts and is a solid tackler. That's a good enough baseline for the undrafted rookie to crack the roster. None of the other young corners have stood out.

Scott gives the Eagles a player with some CB/S versatility, but he has mainly played safety recently, so we'll put him here.

Chachere was a tough call, but ultimately, he's on his sixth team since entering the league as an undrafted player in 2018. I'm sure the Eagles would like to keep him for his special teams contributions, but this is the type of player the Eagles should be OK with losing should he get claimed by another team, as opposed to a younger player with more upside.

Blankenship was also a difficult cut, but Wallace was a recent fourth-round pick and Howie Roseman has control over the final 53. Wallace had a shaky start to camp, but he has come on of late. I'd keep Blankenship, but I think Wallace will survive.

Safety is the hardest position to figure out this year, by far.

Look for Jackson and Toth to remain on PUP into the regular season.