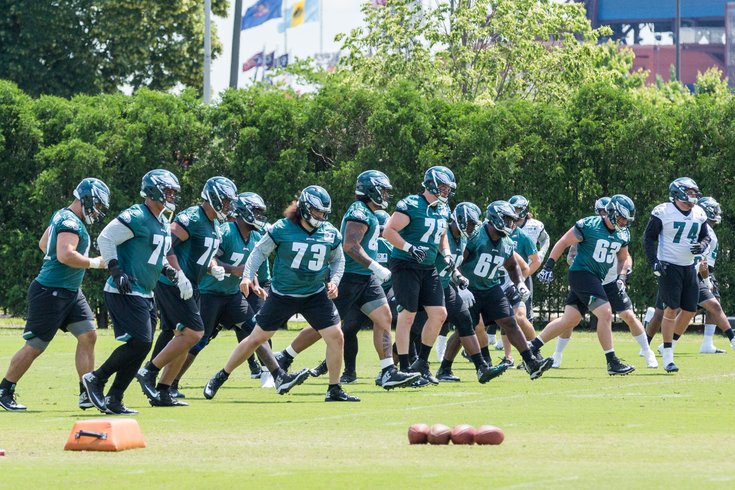 The Eagles could go heavy on the offensive line this year.

Is it dumb to project what the Eagles' roster will look like when we're only in June and haven't even put on pads yet? Yeah, maybe. Still, guessing on a 53-man roster does provide one way of looking at the roster in terms of camp battles to watch, as well as where the team is positionally strong, and where it is weak.

So, what the hell? Since spring practices just wrapped up and we have a looooong gap until the next Eagles practice, let's just do this.

We'll see if the Eagles deal Foles before the start of the season. They are certainly willing, but will another team out there meet the Eagles' trade demands? Joe Callahan also had a strong spring, though I can't justify keeping four quarterbacks on a loaded roster.

The first three running back spots are set, with Ajayi, Clement and Sproles certain to make the team. The fourth running back spot will be a battle between Jones, Donnel Pumphrey, Wendell Smallwood, and undrafted rookie Josh Adams. I'll give the Jones the early lead.

Wheaton showed me enough during the spring that he may be back from injuries that plagued his last two season. I like his chances of sticking on the roster.

Richard Rodgers had a solid spring, and Billy Brown hasn't stood out, so we'll give Rodgers the nod. Ertz and Goedert are locks, obviously.

The Eagles worked out Pryor both at guard and tackle during the spring, getting him a whole lot of reps, which is an early check mark in his favor. Mailata has no chance of playing this season, but the fact that the Eagles traded up to get him tells me that they won't want to expose him to waivers at final cutdowns.

We'll assume that Timmy Jernigan will start the season on the NFI (non-football injury) list, which will free up an extra roster spot. Otherwise, there's nothing surprising here.

We'll see if the Eagles add another veteran linebacker after losing Paul Worrilow for the season with a torn ACL. Either way, Joe Walker's time with the team is in jeopardy.

Bausby has good size, NFL experience, and played well during spring practices. He, along with Jones and Maddox, could make Darby expendable in a trade.

Obviously, Corey Graham is not currently on the roster, but I suspect he will be soon. If the Eagles don't sign a safety, Tre Sullivan would be my projected fourth safety.

None of these guys have any competition in camp, though Johnston is not off to a good start, and he's essentially competing against the rest of the NFL.