Feast your eyes on the Philadelphia Eagles' Super Bowl rings

And yes, there's a dog mask on the inside.— and you even can buy one of your own

Thursday night was sort of like New Year's Eve for the Philadelphia Eagles.

Minicamp came to a close earlier in the day, and head coach Doug Pederson has already said that when the clock strikes midnight, he plans on officially closing the books on their Super Bowl season and turn his and his players' full attention to what they hope will be another Super Bowl season.

Oh, there was also a celebration to be had. That's because the Birds were getting their Super Bowl rings. Here's a first look at their new hardware: 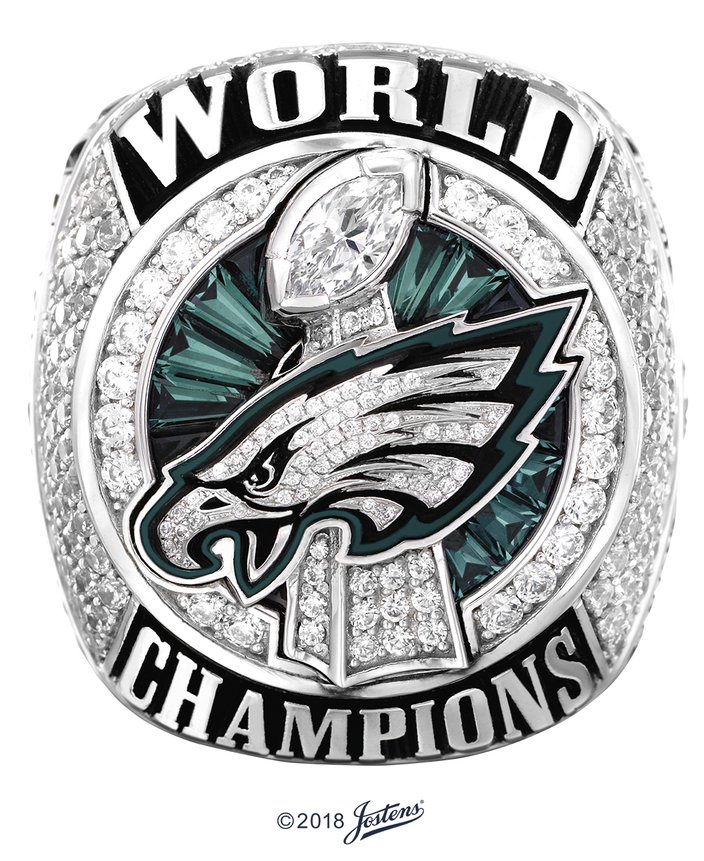 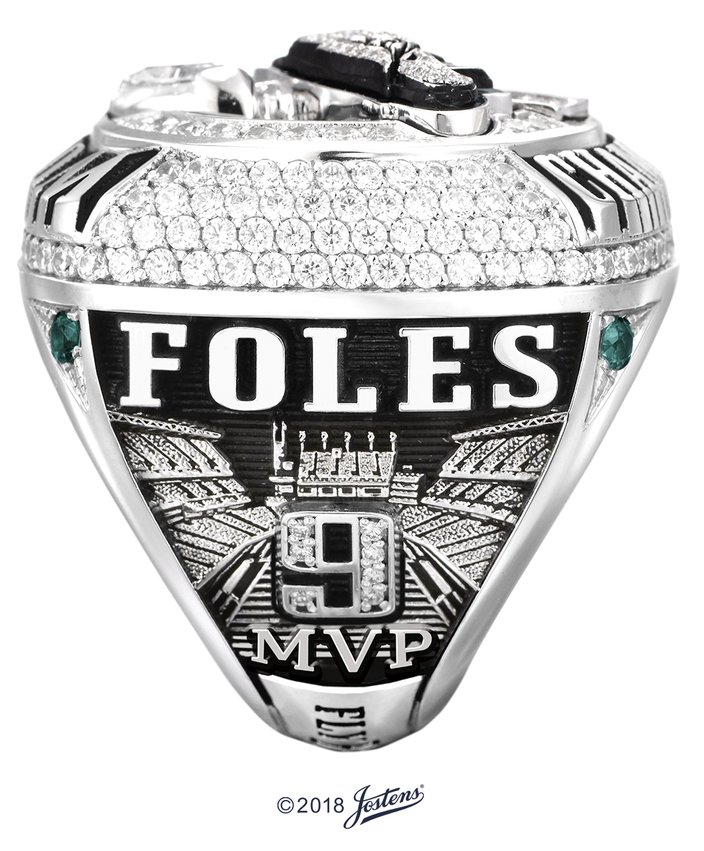 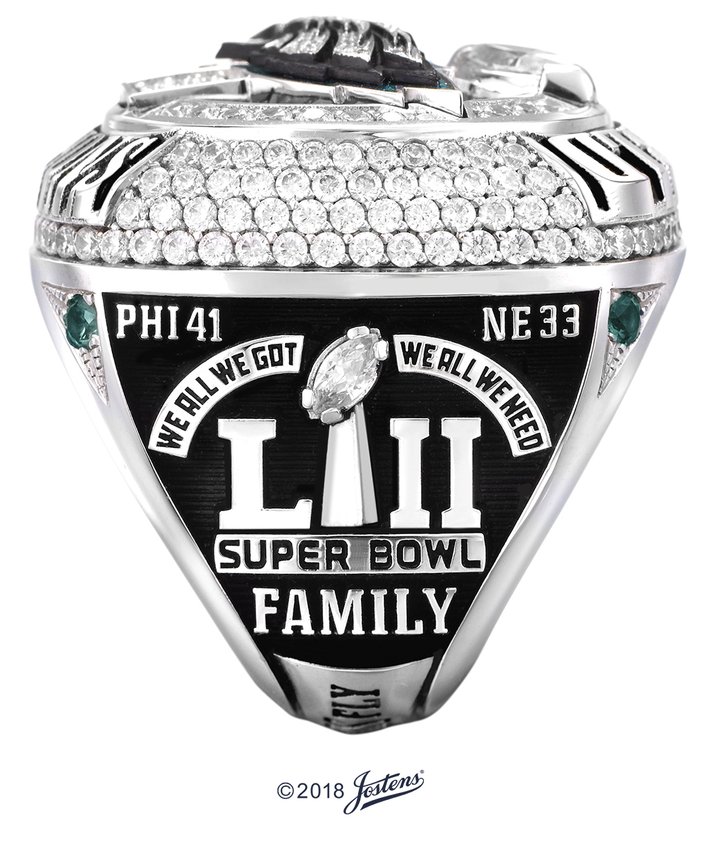 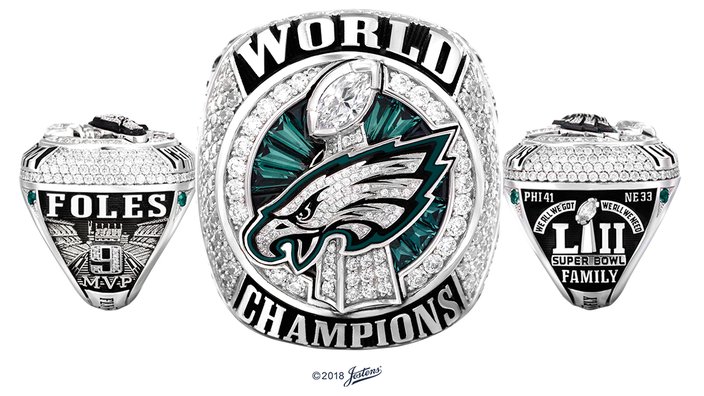 Oh, and there's a dog mask engraved on the inside...

There is a 🐶Dog mask inside the Eagles Super Bowl 💎 Diamond Rings too!!!

Here's the full description of what's included on the ring, courtesy of the Eagles:

The ring is made of 10-karat white gold and features 219 diamonds and 17 genuine green sapphires with a total weight of 9.15 carats. The rare rough green sapphires were secured to match the official team color. The ring top features the Eagle head logo, set atop the Vince Lombardi Trophy and custom-cut, genuine green baguette sapphires surrounded by intricate, pavé-set diamonds. Fifty-two pavé-set diamonds are set within the Eagle head, signifying Super Bowl LII.  The bottom portion of the base of the trophy features 13 pavé-set diamonds representing the 13 regular season victories that tied the franchise record. The top of the trophy is adorned with three diamonds, representing not only the number of times the Eagles were deemed underdogs, but also the number of post-season victories it took to be crowned World Champions. A large marquise-cut diamond is featured at the top of the Vince Lombardi Trophy to represent the first Super Bowl Championship in franchise history. To round out the ring top, the words “WORLD CHAMPIONS” adorn the top and bottom edges.

The bezel of the ring features a waterfall of 127 diamonds, paying tribute to one of the most memorable moments in franchise history – “The Philly Special” – the trick play that resulted in a touchdown on fourth-and-goal from the 1-yard line in Super Bowl LII. The 127 diamonds represent the combined jersey numbers of three key players involved in the play – Corey Clement (30), Trey Burton (88) and Nick Foles (9). Four round, genuine green sapphires adorn the corners of the base of the ring and symbolize the team’s four NFL Championships – three World Championships (1948, 1949, 1960) and one Super Bowl Championship (2017).

The left side of the ring features the player’s name set above an end zone view silhouette of Lincoln Financial Field, the home of the Philadelphia Eagles. The inclusion of the stadium is a symbolic tribute to the passionate and dedicated fan base that has supported the team since its formation in 1933. The player’s number is studded with pavé-set diamonds and set in the middle of the football field.

The right side of the ring features the score from Super Bowl LII (PHI 41 – NE 33) and one of the team’s messages of unity throughout the season, “WE ALL WE GOT, WE ALL WE NEED” is set above the Super Bowl LII logo. The word “FAMILY” sits below the logo and serves as a reminder of the team’s commitment and dedication to each other.

In honor of Eagles fans across the region, country, and world, the words from the team’s fight song, “FLY EAGLES FLY” are written on the bottom of the outer band. The top of the inside arbor of the ring is inscribed with the scores from the team’s three postseason victories and an image of an underdog mask, an acknowledgement of how the Eagles embraced and overcame their underdog role to galvanize the team, the fans and the entire city of Philadelphia. The bottom of the inside arbor is inscribed with each player’s signature – the first-time championship rings have ever featured engraved signatures.

While Pederson wants to move on to 2018, there's actually still one more post-Super Bowl party left — and that's in Week 1 when they raise the championship banner at Lincoln Financial Field.