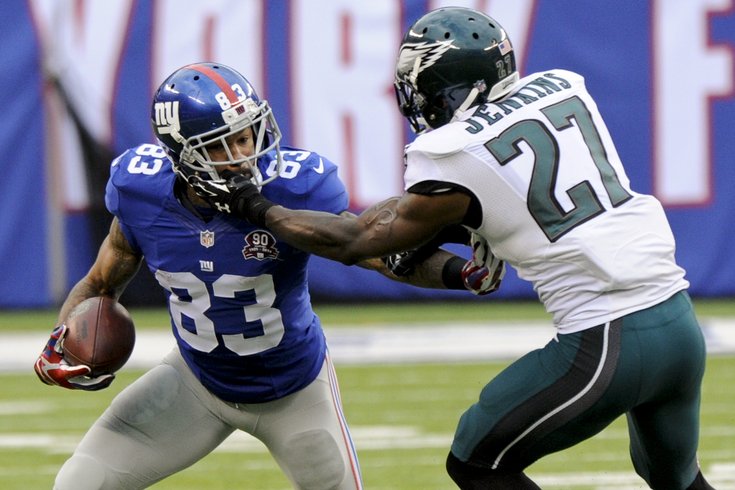 Malcolm Jenkins leads the ninth youngest secondary in the NFL.

With the NFL's free agency period and the draft in the books, NFL teams will continue to tweak their rosters, but for the most part, we can make educated guesses at this point on who each teams' projected starters will be. Earlier this offseason, we took some inventory on Eagles' players' ages, broken up by positional groups, starting with the offense. In cased you missed those, you can find them here:

Today we'll look at the defensive secondary. As the chart below shows, the Eagles are tied for the 23rd oldest (or ninth youngest) secondary in the NFL:

• For the Eagles we projected the following starting secondary: Byron Maxwell (27), Eric Rowe (22), Malcolm Jenkins (27), and Walter Thurmond (27). Age is not a concern for the Eagles in their secondary. It's more about whether those players will be good or not.

• Of the four projected starters, Rowe is the most likely projection to be incorrect. He'll battle it out with Nolan Carroll (28) in training camp for the starting job opposite Maxwell. So far Rowe has looked good in OTAs and minicamp, and has impressed the coaching staff. If the competition is even close, I think the Eagles would be wise to let Rowe play, take his lumps early, learn from them, and be a smarter player for the stretch run.

• Thurmond is the other question mark, but he is the clear-cut favorite to win the starting safety job opposite Malcolm Jenkins.

• We noted Nolan Carroll and Brandon Boykin in the list of players below, just to show where they would fall age-wise in comparison to the rest of the league.

• It feels like Malcolm Jenkins has been in the NFL for longer than he has, especially the way he has taken on a leadership role in Philly, but he's right around the middle of the pack in the NFL in terms of age, at 27.

• If you look at some of the older safeties in the league, many of them played CB earlier in their careers. For example, three of the four oldest safeties listed below (Charles Woodson, Mike Adams, Antrel Rolle) all at one time played corner. If Eric Rowe turns out to be a good player who has a long career at CB, whenever he begins to lose a step he could move to the back end because of his size. By then he'll be far removed from the days he played safety in college, so I'm not sure how much that experience will help him by then, but the fact that he played safety for three years at Utah could give more teams more confidence that he has the skill set to make that move when he ages.