Eagles Aussie Jordan Mailata on learning football: 'Before I had one peanut, today I have two peanuts' 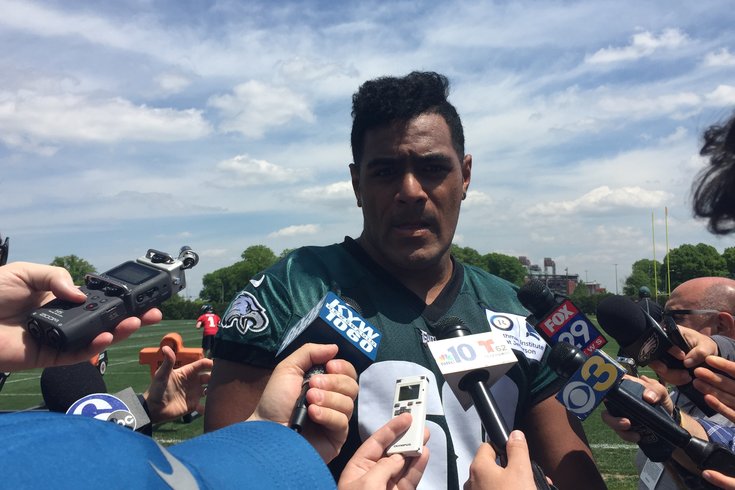 The media circus is certainly interested in Australian Jordan Mailata's trek to become a football player.

Jordan Mailata looks like a football player. At 6-foot-8 and 346 pounds, he is literally the tallest and heaviest player on the Eagles' current 90-man roster.

He's intimidating, wears a size 18 shoe and has quickness and strength that is enough to make football scouts drool.

But then he opens his mouth — and the you hear his delightful, friendly Australian accent. And you hear him tell you about his football knowledge.

“It’s still peanuts," the spry 21-year-old said, "but before I had one peanut, today I have two peanuts."

Mailata is a gargantuan athlete from Sydney, Australia who has looked dominant at his real sport, rugby. But he's completely bought into his new adventure: turning a flyer of a seventh-round pick from the Eagles into a place on an NFL roster.

“To make the team it’s going to be really hard, there are some really great guys up front, best in the league," Mailata, who has only recently started to learn the language of an NFL playbook, said. “I really like this coaching staff, they just throw you out into the deep end. Thank god I had the guys around me helping, they were my life jacket."

The game of football is so fundamentally new to Mailata that he found wearing a helmet a bit peculiar as he took instruction and practiced with his fellow rookies and try-out hopefuls as the Eagles' rookie mini-camp opened Friday.

“I was just fiddling with the helmet," he said, holding his big lid in his hands awkwardly as he talked to hoards of interested media members. "Every time I was on the field, my head just feels choked. Every time I could I took it off and had a breather."

While Mailata seemed surprisingly comfortable talking to members of the press, he didn't hide the fact that being in on an NFL practice field was unlike anything he had ever experienced before.

“I can’t put it on a scale, that’s how overwhelming it is," he said.

There's no telling whether or not Mailata will actually make the roster — his best chance might be a spot on the practice squad, but with his size and raw talent anything is possible. He's eager to learn, but also expects to succeed.

"You're probably gonna get cut if you're just happy to be here," fellow 2018 draftee Josh Sweat said after his first practice.

Mailata says he's spoken to offensive linemen Lane Johnson, Isaac Seumalo and Halapoulivaati Vaitai and has been spending all his spare moments in his hotel room studying film and learning football terminology.

That is, when he's not worried about the winter weather.

“I love it, it's great here," Mailata said of Philadelphia. "I have been told it gets really cold. I don’t do the cold. I will have to suck it up when it comes."