DeMeco Ryans and Mychal Kendricks may also sit out Sunday's game vs. the Colts 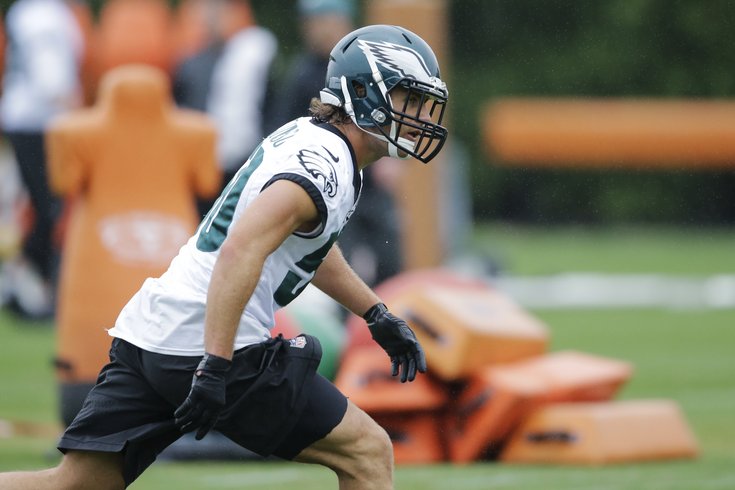 When the Eagles open their preseason schedule on Sunday against the Colts, they'll likely be without the player they gave up the most to get this offseason, Kiko Alonso.

After coming over from Buffalo in the deal that sent running back LeSean McCoy to the Bills, the former Oregon Duck will likely be sidelined Sunday with a concussion that has kept him out of practice the last week.

Defensive coordinator Billy Davis spoke to the media prior to Thursday's practice, and said that it's unlikely the 2013 defensive rookie of the year would dress for the Colts game.

"He's fine," Davis said of Alonso, who was not out on the field with the team. "I've got no worries about Kiko. He'll be alright. We're just being cautious."

"I don't know all the details of [how far he is in the concussion protocol]," Davis added. "I just know that he's not out here today, but I'm not concerned about him at all."

Perhaps part of the reason the team is being extra cautious with their new linebacker is because Alonso missed the entire 2014 season with a torn ACL. Overall, he's looked fine this offseason, both in OTAs and in the limited time we've seen him in camp.

Further complicating the Eagles linebacker situation for Sunday is the fact that the other two players expected to share the load with Alonso in the middle, DeMeco Ryans and Mychal Kendricks, have been limited in practice this week as well. Ryans, who is coming off his second Achilles injury, has been watching from the sideline the last two days, while Kendricks was limited Wednesday and out on Thursday.

For DeMeco, it seems that the team is just taking a cautious approach in handling a veteran coming off a major injury, but the Kendricks situation is much more confusing.

"As far as I know, Mychal's fine, other than little nitpicking things." Davis said.

The fourth-year linebacker was held out earlier in the week for what he called "high load levels," meaning his workload had been too much. And after hardly practicing Wednesday, Kendricks wouldn't elaborate on why he was limited.

Still, Davis didn't seem concerned by any of their injuries. He also didn't seem to know who would be starting at linebacker on Sunday.

"Whoever's left," Davis said when asking who would be playing inside linebacker Sunday. "I believe we're going in with 'If Mychal plays, great.' But even if the starters are playing, it's usually in a limited role anyway."

And according to Davis, that's what this time of year is all about.

"The preseason is awesome from my standpoint, because all these young guys and the guys that are in the second or third role, they get all this playing time. We get all this evaluation time. In the regular season, we only have two starters [at inside linebacker] and they pretty much play every snap. So, we'll have four or five in there and it'll be good experience for them."

OTHER INJURIES ON DEFENSE

• S Earl Wolff was held out of practice Thursday for the first time, along with LB Bryan Braman.

• S Jerome Couplin (apendicitis) will not play Sunday and is expected to be back at some point next week.