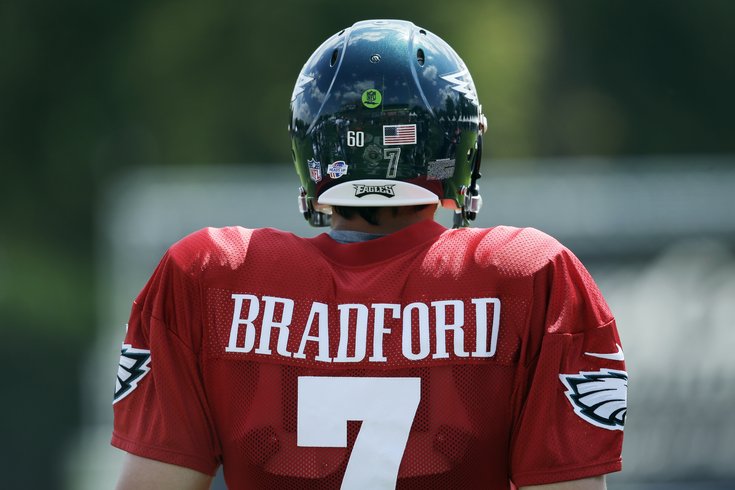 In addition to having a knee that does not look like it is fully healed, Sam Bradford's sleeves are aesthetically unpleasant.

The Eagles' first preseason game is only four days away, and Sam Bradford has yet to make anything close to an athletic move with his legs through OTAs, minicamp, and the beginning of training camp. That would be 17 practices in total that have been open to the media. While he has come a long way in terms of mobility since he first took the field at the end of May, he still looks like he has a ways to go.

The closest he came to an athletic play with his feet was during one of the practices at Lincoln Financial Field where a lane opened up in the middle of the field, and he ran it past the line of scrimmage for a few yards. He then stopped and dropped the ball for the next play. Otherwise, I cannot recall another time he has attempted to tuck it and run, again, in 17 practices.

To note, quarterbacks run the ball with regularity in training camp. Typically, if nobody is open, they can either throw it away, or try to extend the play by escaping the pocket, rolling out, and eventually turning it upfield. Mark Sanchez has done it quite a bit. Matt Barkley has done it, and even had a TD run today. Nick Foles did it regularly when he was here. And Lord knows Tim Tebow does it like 30 times per practice (estimated). It's just a normal thing that happens during practice. But save for that one run jog up the middle at the Linc, there's been none of it from Bradford.

In 7-on-7 and 11-on-11 drills, Bradford will often catch the snap, stay put exactly where he is, and fire. Other times, he'll maybe do a short drop from his shotgun spot, and then throw. To make sure I'm not comparing apples to oranges when measuring Bradford against the other quarterbacks in camp, I took a look at Bradford's game tape, so we're talking apples to apples. While he's never been Michael Vick by any stretch, he at least looked like a guy with reasonable mobility. Below is a basic rollout and throw to the sideline:

Simple, right? There have been times when he has lightly run from the pocket and made a throw, but not with anywhere near the same kind of bounce that he shows above.

A few Eagles media people have noted that Bradford doesn't look hurt. That is a statement with which I agree. He's not limping, nor does he show any sign of pain after his reps. However, not looking hurt and not looking 100 percent (which he clearly is absolutely not) are two different things. From what I've seen, unlike the other quarterbacks, Bradford does not attempt sudden movements to get away from defensive linemen, who, of course, do not touch the quarterbacks in camp. I'm not sure I've even seen him sprint yet. In other words, while it is true that he doesn't look hurt, he shouldn't, because he barely moves.

The Eagles will have to decide if Bradford is ready to face an NFL pass rush on Sunday. Personally, I don't think he's ready, although the Eagles may. If Bradford does play, and he probably will, expect a lot of run plays and very quick passes. Otherwise, Bradford is a sitting duck.

• As far as Bradford's arm goes, there a lot to like there. I've been impressed by his anticipation throws, as noted in a previous practices notes post.

Where Bradford has looked really good is on his anticipation throws. On consecutive throws, he made two very good anticipation throws to Josh Huff. The first was on an in route to Huff, who was on a dead sprint, and Bradford threw to a spot where he knew Huff would stop. Huff turned and the ball was there for him. On the next play, Huff was running an out route, and the ball was in the air before Huff came out of his break. That throw was on the money. He and Huff were definitely on the same page on those two plays, which is very encouraging to see from a QB in a new offense.

He has also had very good accuracy, as previously noted:

Bradford does a terrific job putting the ball where receivers can catch it on the dead sprint, maintain their separation, and get yards after the catch. That is so important. Additionally, many receivers remarked about how Bradford stands tall in the pocket, and they can easily see him deliver passes over the offensive and defensive linemen. That came as a surprise observation to me from the guys who were already on the team a year ago, seeing as Nick Foles is 6'6.

Today in practice, Bradford gunned a sideline throw to a well-covered Jeff Maehl, in the only spot Maehl could get it. Later, Bradford unleashed a seam throw with zip to Josh Huff. Impressive throws have been normal occurrences. So it's certainly not all bad. Bradford can sling it, but if he has to avoid a defensive lineman bearing down on him in live game action, he's in big trouble.

Byron Maxwell on what he tells Josh Huff: "Be who they think you are. Be who you think you are... You a dog, you a beast, be that."

• Josh Huff had perhaps his best day of camp so far. In 1-on-1's, he beat Byron Maxwell on an in-route in which he was able to gain significant separation. On his next rep, he smoked Marc Anthony (not of J-Lo fame) on a deep ball. In 2-on-3's, he had a sliding sideline catch in which he was able to stay in bounds and did the same in the back of the end zone during red zone drills. But my favorite play of the day was subtle. On the seam route mentioned above in the Bradford section of these notes, Huff waited until the last second to put his hands up and snatch the pass, so as not to tip off Byron Maxwell that the ball was in the air. Huff received an atta boy from Maxwell on the play.

Huff and Maxwell have really battled the last few practices, and it has been fun to watch. "You've seen it," said Maxwell. "He has the talent. Just go and do it. Be who they think you are. Be who you think you are. That's really what I'm trying to (tell him). He has all the tools, he can do it. 'You a dog, you a beast, be that.'"

• Nelson Agholor had his worst moment of camp today. He got himself wide open on a deep route, Timmy Tebow placed the ball on a platter for him, aaaaand... drop. Ugh. Otherwise, Agholor was terrific. He does a great job snatching the ball away from his body, which he did all day, and he had a tremendous leaping grab in the front corner of the end zone in which he was able to keep both feet in bounds.

Jordan Matthews had a glowing review of Agholor after practice. "Nelson, I think he's the most explosive of (the Eagles receivers). You think about what he's been able to do. He's come out with the ones and looked so natural, and then when he has a chance to make big plays, he makes them. I can't say enough good things about him. The guy works hard too.

"Nelson is always going to make the next play. It's a good thing that he's hard on himself, because he knows how hard he works at his craft. Every day he comes out here he wants to put a good product on the field. You see a lot of guys who come out here and just punch the clock. They might drop balls, and go 'OK, I'll be here tomorrow,' but these lockers aren't promised. It's beautiful when you see a guy who's a first round pick still have that chip on his shoulder to understand that hey, nothing is promised, none of this stuff is guaranteed. He comes here and works his butt off every single day like an undrafted guy, and I really appreciate that."

• Jordan Matthews had some interesting work on the JUGS machine after practice. Here he is laying on his back, making catches from an over-the-head view:

• RG update! Here's who has worked with the ones each day of camp so far:

That's three for Gardner, two for the rest of the pack.

• Important Tim Tebow uniform update: I'm not sure if this is the first time he's had this or not, but Timmy was rocking a clear visor today.