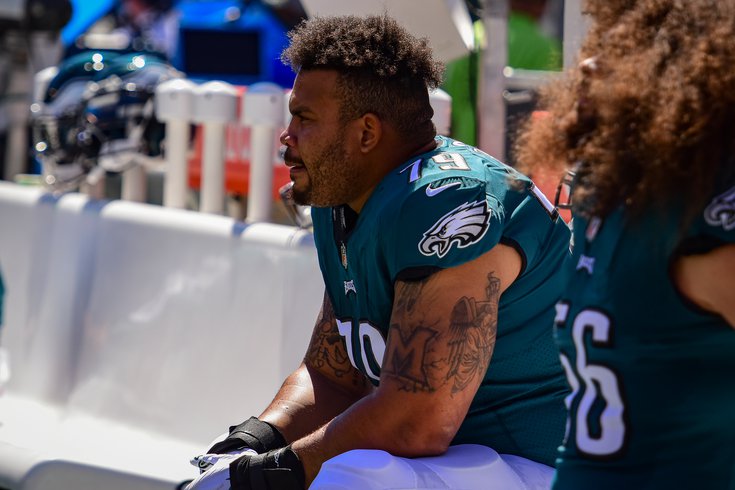 Eagles offensive lineman Brandon Brooks is calling it a career.

Brandon Brooks announced his retirement from the NFL on Wednesday, after a 10-year career with the Houston Texans and Philadelphia Eagles.

You can watch his emotional retirement speech here:

Brooks was a three-time Pro Bowl right guard from 2017 to 2019 and a Super Bowl champion, but he will probably be best remembered for the awareness that he brought to the difficulty of living with anxiety, which he suffered from and worked hard to overcome.

Brooks' Eagles career began in 2016, when he signed a five-year, $40 million contract to start at RG in between Jason Kelce and Lane Johnson. The right side of the Eagles' offensive line soon became the best in the NFL, helping power the Eagles to their first Super Bowl in franchise history.

As Brooks' career continued in Philadelphia, major injuries began to pile up.

It was thought that Brooks' pectoral strain was roughly a two-month injury, but he lingered on injured reserve long after his expected timetable for recovery came and went. During the back stretch of the season, the Eagles declined to offer any sort of update on Brooks' possible return to the field, despite consistent inquiries. Three players — Jack Driscoll, Nate Herbig, and Sua Opeta — started in place of Brooks at RG in 2021.

Brooks spent the better part of the last three and a half years either in season, or aggressively rehabbing major injuries. As such, his retirement at the age of 32 does not come as a surprise.

In the aftermath of Brooks' retirement, there's the matter of how the remnants of his contract will affect the Eagles' salary cap going forward. Retirements work in a similar way to releases. Normally, if a player is released, whatever guaranteed salary is left on his deal, and any prorated bonus money that has already been paid out to the player will remain on the team's salary cap.

If a player retires, he does not get paid his salary (duh) or any roster bonuses, but any prorated bonus money already paid to the player that has not yet counted toward the salary cap will, you know, count toward the salary cap. There have been some occasions in which teams have attempted to recoup signing bonus money after a player unexpectedly retired, but that was never going to happen in Brooks' case, given his laundry list of major injuries and his contributions to the team.

But what about this, from Mike Garafolo?

Clearly a deal for cap purposes in anticipation of him not being an Eagle this year.

By lowering Brooks' salary from $13.4 million to the veteran minimum of $1.2 million, the Eagles will only have to carry Brooks on their cap until June at around $7.1 million, as opposed to the $19,439,235 cited above. Soon after June 1, they will place him on their reserve/retired list, and his veteran minimum salary of $1.2 million will come off the books, lowering his cap number to $5,939,235 (which is dead money). And again, he would count for $9,797,237 in 2023. Got it? Yes? No? Well whatever, the NFL's salary cap rules are often hard to figure out, and even harder to explain.